Buri has the courage to embrace his biggest failure; may we all learn to be so brave. 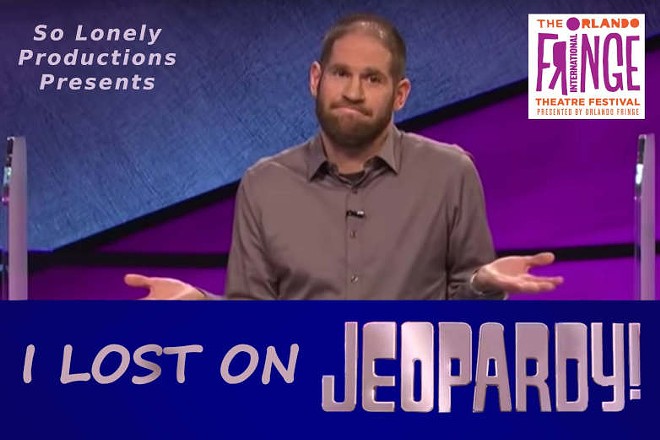 For years, my wife has been encouraging me to audition for the iconic television quiz show Jeopardy!, based solely on my mastery of useless trivia, but I’ve always refused based on my inability to contend with the clicker. It turns out that you can accurately simulate chiming in at home using a spring-loaded toilet paper roll holder. That’s just one of the fascinating pieces of ephemera I learned from Winnipeg history teacher George Buri, who was one question away from achieving his lifelong goal of being a winning contestant before being foiled by a Final Jeopardy.

In this funny and unexpectedly inspiring one-man show, Buri takes us from his 25-hour road trip to Kansas City for an in-person audition to his final heartbroken drive away from Sony Pictures Studios in Culver City, California. Along the ride, we learn tips for getting on the air — don’t be overly opinionated or too introverted — and trace the roots of Buri’s obsession back to his childhood playing the abominable 1980s home version, when Hollywood felt as far away from his Canadian home as the moon.

The appeal of Jeopardy! might be elusive to trivia muggles, but those (like Buri and I) with the genetic predisposition toward intellectual competitiveness understand the appeal of finding self-respect in the accumulation of obscure knowledge. I can certainly identify with Buri’s wry self-awareness about how useless his singular talents are now, in a world with smartphones and Google. But it turns out that, in game shows and in life, the winner isn’t always the smartest or fastest, but the one with an unnatural ability to handle pressure.

Buri’s tale might not be a major tragedy in the big scheme of things, but between laughs he builds tension around the story of his defeat like it was the Super Bowl, making it impossible not to empathize with his agony coming so close to his dream, only to have it snatched away. But everyone who plays Jeopardy! — or the game called life — loses eventually; what matters is that you’re willing to play.

Buri didn’t get rich or famous like he hoped, and he’s made peace with his loss on Jeopardy likely being the longest-lasting fact of his existence. Buri has the courage to embrace his biggest failure; may we all learn to be so brave.

Tickets and show info: I Lost on Jeopardy