The best I can say is that at least this show’s unbelievable badness isn’t boring. 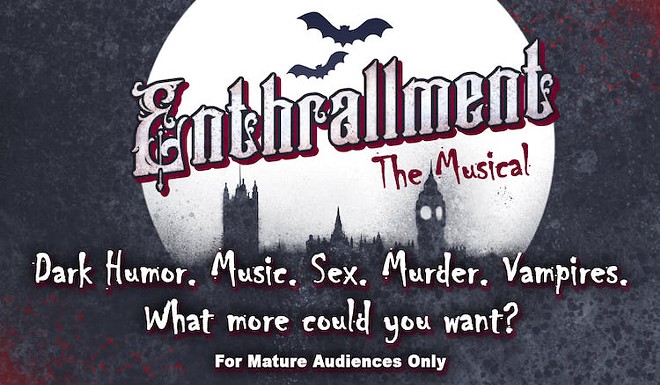 This ambitious original effort features an impressively immense cast that is cursed with quantity over quality. The actresses fare better — especially Janine Papin in her too-brief appearance as the imperious Prince of Darkness — but their male counterparts provide a muddled melange of inconsistent accents and acting styles. Be aware that the striking blonde singer who starred in the teaser presented last month apparently exited the production shortly before opening; his replacement deserves kudos for stepping in at the last minute, but he simply can’t sustain the emotional or musical pitch his role requires. In fact, only Kat Akers manages to create a coherent character as a cynical trans violinist who closes the show on a chilling a cappella high note.

Although everyone on stage is obviously giving it the old college try, they’ve invested their efforts in a script that never seems to know whether it’s supposed to be a comedy or thriller. Enthrallment is too stiffly straight-faced to be funny, but everything from the Moulin Rouge-meets-Madonna costumes to the clunky fight choreography is too schlocky to be genuinely scary. Most egregiously, after its lugubrious titular opening number, this alleged musical forgets to feature any actual music for almost forty minutes, then hurriedly shoehorns in a series of songs that all sound like rejects from Jekyll & Hyde accompanied by a keyboard-pounding housecat. And the plot mechanics even appear to disregard basic rules of vampirism, as decreed by both Bram and Buffy.

It pains me to say this as a longtime fan of both the genre and director Terry Gianotsos, but Enthrallment both bites and sucks. The best I can say is that, unlike certain other dumpster fires at this festival, at least this show’s unbelievable badness isn’t boring.