Orlando Fringe 2022 review: 'A Young Man Dressed as a Gorilla'

All hail the great gorilla, the destroyer & resurrector of Orlando theater! 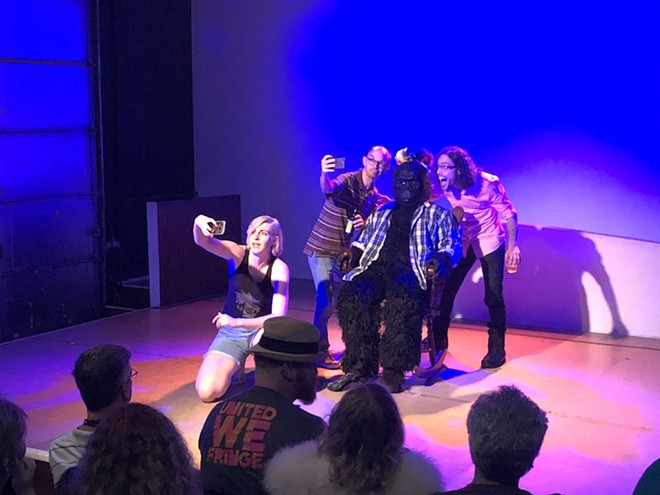 Photo by Seth Kubersky
"A Young Man Dressed as a Gorilla," 2018

Australia’s master monologian Jon Bennett was back at the Orlando Fringe on Tuesday night to facilitate the infamous “A Young Man Dressed as a Gorilla Dressed as an Old Man Sits in a Rocking Chair for Fifty-Six Minutes and Leaves” performance art piece, which drew an audience of artists and onlookers for its one-night only run at Renaissance.

As always, this show about nothing is a Rorschach test in which the titular primate performer is really a red herring whose role is to reveal the audience to itself. Initially, the subdued audience uneasily whispered amongst themselves, but before long, some brave individuals made their own eclectic contributions to the evening.

Bobby Wesley offered a banana-themed knock-knock joke; Bruce Costella (Spooky & Gay) read several original haikus; director Danielle Ziss cleaned the gorilla’s glasses for him, and others polished his shoes or snapped selfies. And of course there was the ritual coitus interruptus performance of Phil Collins’s “In the Air Tonight.”

Most memorably, venue sponsor Ed Anthony assembled his own chair so he could sit & rock alongside the star as Donald Rupe distributed shots to thirsty attendees. I was especially fascinated by the way the crowd’s chatter would build to a crescendo, only for the audience to spontaneously shush itself. 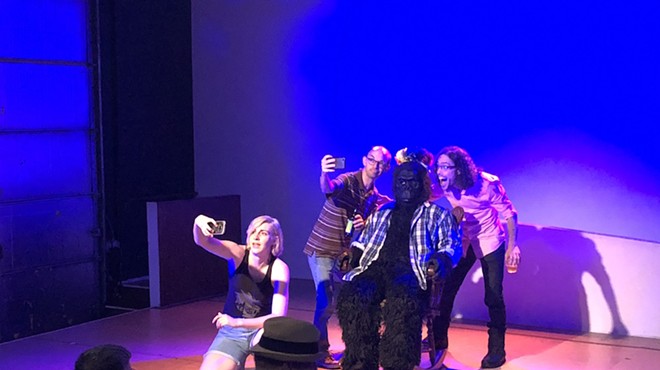 
The first time I witnessed the gorilla show in 2018, I was despondent over the disrespect and debauchery displayed by the crowd, which competed to outdo each other in overshadowing the gorilla’s simple silent grace. Although the 2022 edition was far from a solemn church service, it inspired me with hope that post-pandemic patrons can appreciate and participate in such an experiment without it turning into an embarrassing shitshow.

All hail the great gorilla, the destroyer & resurrector of Orlando theater; long may he rock!