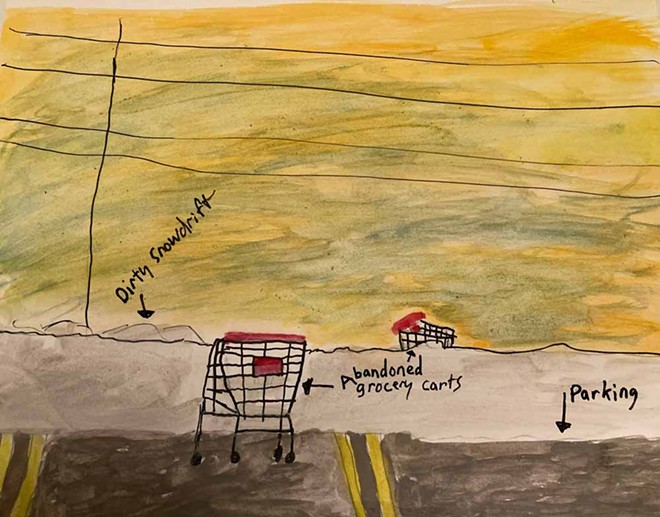 2022 was supposed to be the year when Orlando fully rebounded from the pandemic, but although the theme parks' attendance has returned to pre-pandemic levels, our arts and cultural scene seems like it's been taking a step backwards for every forward pace. Over the past three months, negative news like the acoustically lackluster launch of Steinmetz Hall, authenticity issues surrounding OMA's blockbuster Basquiat exhibit, and the abrupt exit of Blue Star from Häos on Church have overshadowed signs of potential progress, leaving me feeling increasingly frustrated about Central Florida's artistic future.

Looking for reminders of a less cynical time, last weekend I revisited one of my earlier sites of inspiration, and reconnected with the person who perhaps best represents the spirit of independent Orlando artists. The location was FAVO, Park Lake Presbyterian Church's Faith Arts Village Orlando, which I first covered in Live Active Cultures nearly a decade ago (in the Jan. 8, 2013 issue); the person was curator Patrick Greene, whose last appearance in the column concerned his departure from the country (July 25, 2018), which (lucky for us) turned out to be short-lived.

Its initial "First Friday" open-house food truck events have expanded into public exhibitions on the first Friday and Saturday of every month. And I'm happy to see FAVO's collective has fleshed out over the years from those first two "artists-in-residence" to over two dozen occupants spanning a diverse range of disciplines, from feminist painter Susana Youngsteadt to framer Geoff Gregory to sculptor Byron Walker, who uses a chainsaw to craft tactile puns from found objects — like a circle of keys in the shape of Florida.

I found Greene in the rear of the complex, sitting outside Room 249, the ceramics gallery of his friend Richard Munster, whom Greene calls "one of the best, a great artist [and] an intellectual on a skateboard." Greene, who has spearheaded regional public art projects like "Walk On By" and "TrIP," most recently curated The Corridor Project Billboard Exhibition, which he says went "even smoother than I anticipated." But at FAVO, he put on display something far more intimate and personal than his usual large-scale collaborations.

"This is a show ... inspired by the isolation of the pandemic," explained Greene as he showed me around the small, stark room lined with pages covered by childlike doodles and cramped handwriting. "I was taking care of my friend's mom for a few months, and I didn't really have much of a social life at the time because I was in the house, and I couldn't really have guests, [so] I started doing something that I hadn't done in years, drawing little sketches."

As Greene admits, the resulting series of drawings are "almost cartoon-like, but they're autobiographical," sharing scintillating stories from his youth that I'd never known before. One recounts his father's career as a drug smuggler and offshore banking entrepreneur; another heartbreakingly memorializes his lost childhood treasures, including his late dog and a homemade Kon-Tiki raft; a third illustrates the time he met novelist Harry Crews, who "threw my boss through some drywall, which was really pretty funny because my boss really idolized him, and he wasn't really very nice to anybody."

Some other pieces weren't as explicit, but they were equally emotionally evocative: a crude watercolor reproduction of Edvard Munch's Uninvited Visitors; or a snowy parking lot littered with shopping carts. "I like those abandoned landscapes," says Greene. "I always think we have these amazing urban landscapes."

Even though Greene is famous for his mayoral campaign slogan, "I don't want to talk about it," I took advantage of his introspective artistic mood to ask for his honest take on the current state of Orlando's visual art galleries. It turns out Greene — who is currently working with several museums on a proposed multi-city event involving graphical musical scores — had plenty to say on the subject:

"I think the pandemic kind of interrupted a lot of things, [and] real estate prices are so high nowadays. It really kind of feels like the idea of having a permanent space feels a little outdated. That doesn't mean I don't want it, but I feel like we might have to move with what the times are forcing us to move to. You almost need some other business next door that's making a bunch of money.

"I wish there would be a little more respect for some kind of renegade public projects because I feel like the unknown is a little scary around here. ... Even the institutions around here, they don't trust the person that comes to them. ... There's a lot of people with a lot of money and spaces. Why don't they just let some of that go? You know, can I be your tax write-off?"