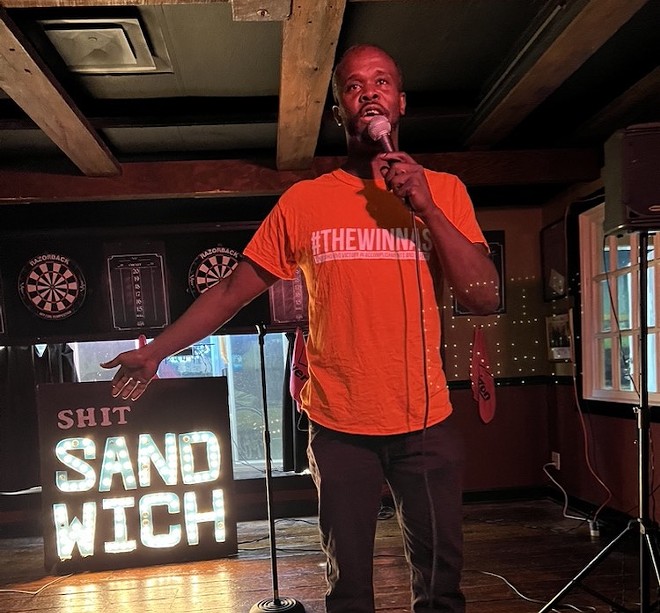 Orlando’s comedy scene owes some of its DNA to the late Matt Gersting’s brainchild, a showcase called Shit Sandwich. A longtime fixture at Bull & Bush in the Milk District, Gersting launched his show at the venue on June 2, 2012. His close friend Larry Fulford hosted on that night, and the pub was packed. Akeem Woods and Tom Feeney were no-shows, which they never lived down.

Fulford was around at the beginning, and recalls Gersting’s intentions as well as anyone could: “He was just like a giant comedy connoisseur. We both played in bands in our 20s in Orlando, but we never really became friends until stand-up. … He was at Bull & Bush a lot, and I just think he saw an opportunity there to run a comedy room at a bar the way he would want one run.”

“Back in the day, there weren’t as many showcases. He wanted something that wasn’t a mic, was a little more vetted, but also regular enough that people who were trying to get really good at comedy would have another place to do it,” recalls Fulford.

Ross McCoy, at the time the third mic on the podcast A Mediocre Time With Tom and Dan, had never been to Bull & Bush before the first Shit Sandwich. He saw a post on Facebook that led him to the pub.

“I came through the front door where the stage is. I was five minutes late, so like, you know, right at the beginning of Larry’s set, and it was packed. So I had to walk in like, through a bunch of people to the back, to talk to Matt about going up.”

Aaron “Salty Aaron” Saudargas, who at that time had not yet started doing stand-up, was in the audience in those early days. “The first years of Shit Sandwich were what we now consider to be a prominent time in Orlando comedy, with comedians like Heather Shaw, Larry Fulford and, obviously, Matt Gersting on the showcase. I would see Matt get up there and murder for five minutes. Like it was nothing.”

Gersting’s room nurtured homegrown talent, and a number of Central Florida comedians who came up at Shit Sandwich went on to do big things.

Shaw, who did a set there for the first time in 2015, remembers Gersting warmly: “He was extremely nice to everybody, considering that he had probably one of the best rooms. And he was cool. I was so new in comedy. He was super welcoming and gave advice. His room was the height of all comedy.”

Hosting responsibilities rotated up until 2015, and by the time comedian and podcaster Derrius “D-Rugg” Boston did his first set, Ross McCoy was the sole host.

Gersting died in April of 2016. He was remembered this way by Orlando Weekly:

Gersting was responsible for setting up the Shit Sandwich comedy showcase at the Bull & Bush, a move which was instrumental to the comedy renaissance the city has experienced over the past few years. He was also one of the founding organizers of the Orlando Indie Comedy Fest, which brought up-and-coming stand-ups from all over the country to Orlando and put our comedy scene on the map. Gersting was known for his love of pinball and '90s alt-rock, never missing an opportunity to instigate a singalong with friends and strangers or to leave his name on the high score board of many a local pinball machine.


It’s been a decade, and the showcase soldiers on every other Saturday night. As it celebrates its tin anniversary at 9 p.m. Saturday, June 4, 2022, a stellar line-up is promised — the aforementioned Akeem Woods and Larry Fulford, David Jolly, Doug McPherson, Jake Ricca, Lee Cohen, Rauce Padgett, Sara Nowak, Sean Philippe and Tim “Big Tim” Murphy will all be on deck.