Ever since the controversial departure of artistic director Joseph C. Walsh from the Garden Theatre, the most frequently asked question in the arts community has been, “How is Joe?” During his three-year tenure, Walsh diversified the offerings at Winter Garden’s city-owned stage to critical and audience acclaim, and his exit sparked a wave of staff resignations [see “Live Active Cultures,” June 29]. When I recently sat down with him for an interview at a cafe directly across Plant Street from his previous theatrical home, he remained as silent regarding that situation as he has all summer. But Walsh does have one clear message to send to his many supporters: “I’m doing great.” 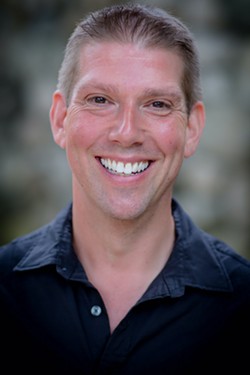 “The outpouring of support has been overwhelming,” Walsh says. “If there’s anything that I want to say, it’s ‘thank you.’ Thank you to this community; thank you to my friends; thank you to my colleagues, the actors. It truly has been unbelievable to feel that much support for myself and for the work that we’ve been doing.”

After getting Garden Theatre’s On Your Feet on its feet, Walsh spent two weeks directing a Disney revue at a summer camp in New York, where he “caught up on the shows, caught up with some friends, and that really felt like my break.”

Rather than rehashing the past, Walsh was here to talk about the future, in the form of his new artistic venture, Ghost Light Theatricals. The company is a spiritual successor to Wild Oats Productions, a U.K.-based troupe Walsh founded in 2005 with Rob Archibald, Alexander Rudd and Kevin James.

The new name pays tributes to the safety lamps always left onstage in darkened theaters, which Walsh calls “a sign of hope [and] always a sign that theaters were going to come back  …  so it’s an image that really has become close to my heart.”

The ghost light’s values of “hope, safety and community” are what Walsh and his collaborators — including associate director James Tuuao, who joined us for our chat — say they’re building their new company around. Walsh says one of their top priorities is collaborating with others to “create safe spaces as a community … to build further conversation [and] ways of discussing the needs as theater changes … so that as a group, we can help make theater practice better for the participants.”

Tuuao, a veteran Disney dancer-choreographer from California who began working with Walsh on last year’s Godspell, vouches that Walsh “has always been really great at opening the floor and opening the table to voices, and letting them be heard.”

You can see that ethos reflected on stage starting with their inaugural production of Michel Marc Bouchard’s Lilies: or the revival of a romantic drama, running now through Sept. 24 at Theatre South Playhouse (teachtix.com/tsplayhouse/lilies). Walsh presented the play’s U.K. premiere with Wild Oats 15 years ago, and he says he wanted to revive the queer Quebecois prison drama because “what I’m very interested in is finding the beauty in places of harshness or ugliness, and really trying to empower that beauty and use theater to remind us that beauty and humanity can be found anywhere.”

Walsh says he was originally afraid the script might have aged poorly, but after asking friends to reread it, he decided the same-sex love story between schoolboys not only remained relevant, but that it is “really interesting and important to tell that story now and to offer conversation around it, especially as we’re living in a state with the ‘Don’t Say Gay’ bill.”

“We found some brilliant artists that really know how to connect with not only the material, but with each other, and they relate so well to each character within the play,” says Tuuao.

Walsh calls the ensemble “an amazingly talented, wonderful and open group of actors,” saying, “Everyone came in ready to be part of an experience where we talked about ourselves, and we use the lens of ourselves and our experiences to create these characters. … I think we’re really finding a very unique new perspective to this work, because everyone is bringing themselves into the room and into the table.”

Looking past this first production, Walsh says Ghost Light is looking to build an education program, which could include a musical theater writing course and a workshop in acting through song. They’re also “exploring all the options” of becoming a nonprofit organization, and recently held a fundraiser that attracted the talents of nearly 20 top Central Florida singers.

“It was so wonderful to launch this company with such love,” says Walsh about this the show of support, which Tuuao calls “really eye-opening … because we all have our own individual stories with Joe, but to hear it in a full room … it was really nice to be able to celebrate that for Joe, and also for the theater.”

For Walsh, what Ghost Light produces is ultimately less important than how they get there. “It’s all about the process and not the product. When you start to open your eyes up to the process being the center of the experience instead of the product, you really open yourself up to those moments that make it all worth it,” summarizes Walsh.