One of Orlando's longest running shows is about to close, and that might mean big things for Universal 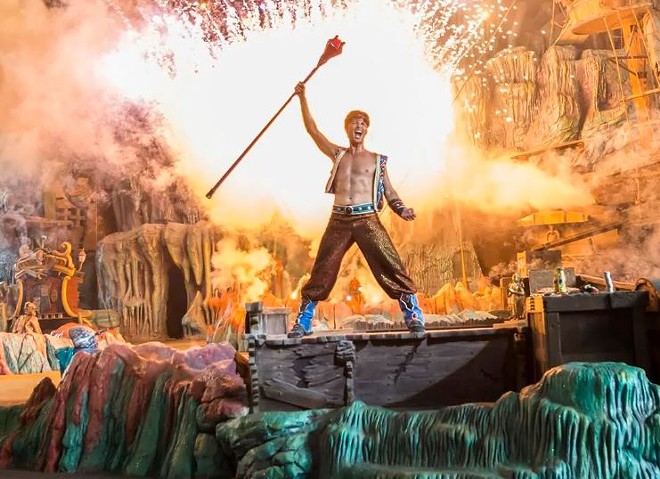 Image via Universal Orlando
After nearly two decades, one of Orlando’s most iconic live-action shows is about to close.

The Eighth Voyage of Sinbad stunt show is an opening-day attraction at Universal Orlando's Islands of Adventure. Based on stories found within the Arabian Nights collection, the stunt show hasn’t changed much since opening in 1999. An impressive stunt towards the end of the show where a performer fell multiple stories while covered in flames wasn’t enough to save the stunt show, which is filled with groan-worthy campy jokes and less-than-impressive fight sequences.

In their review of the show, Touring Plans said that one of their staff members defined seeing the show to “a colonoscopy – once every 10 years is enough.”

Reviews on Universal's own site include statements such as "Show is awful and and not even kids will find it entertaining.  Not worthy of a big name theme park. Maybe passable at a local fair" and "It's really a waste of time. I was disappointed."

Despite the poor reviews, the show remained a staple at Islands of Adventure over the years, even as the park went through incredible changes, including the addition of The Wizarding World of Harry Potter – Hogsmeade and new attractions like Skull Island: Reign of Kong.

When Potter was announced it looked like Sinbad’s days were numbered. With Harry Potter’s success unknown, Universal opted for retrofitting a pre-existing part of the park turning half of the Lost Continent land where Sinbad is located to what is now Hogsmeade. But Sinbad sits in the half of the area that remained untouched. Clocking in with 19 years of performances, The Eighth Voyage of Sinbad is one of the longest-running shows in theme park history. 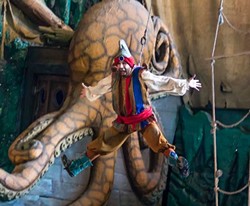 Image via Universal Orlando
A small update to the show three years ago removed some of the more dated references and gave the set a fresh coat of paint. The impressively large set was designed before the show was even written, and there are many parts of the stage that seem dead during most of the show.

Since Potter’s opening in 2007, there have been various rumors of Sinbad’s closure but every time the rumors heated up, the show pushed forward. Then seemingly out of nowhere on Aug. 16, Universal leadership called a mandatory meeting for all cast and crew at which it was confirmed the show will have its final performance on Sept. 15. There's no word yet on what will be replacing the show.

Next door at Universal Studios Florida, the T2-3D: Battle Across Time live stunt show closed last year. A new show, rumored to be themed to Jason Bourne, is likely to open sometime in 2019. Some cast and crew from Sinbad may move to the rumored new Bourne show.

Back at Islands of Adventure, there is still the question of what will replace the Sinbad show. A second outdoor amphitheater has been sitting mostly empty at Islands of Adventure for years, so the Sinbad closure could just be a simple budget cut, but that hasn’t stopped many from speculating on rumored new additions for the prime real estate that the theater sits on. The obvious replacement would be more Harry Potter. Visible from the Hogwarts Express queue, the Sinbad theater sits near the entrance to Hogsmeade, but with a substantial new addition already under construction where Dragon Challenge was located, even Harry Potter seems like a stretch.

There have also been rumors of a Seuss Landing expansion taking over a part of Lost Continent, but most of those rumors involve the front half of the land where Poseidon’s Fury is located and not the back of the land where Sinbad is. Nintendo’s Zelda has been floated as a possibility, except it’s thought that before any of the existing parks receive Nintendo characters the Super Nintendo World will open as part of the yet-to-be-announced new theme park. That park is expected to open no earlier than 2021, with a likely opening sometime in the early to mid-2020s, years from now. A fourth rumor involves the DreamWorks franchise How to Train Your Dragon, which is already featured in the new nighttime show at Universal Studios Florida but otherwise has little presence at the resort. DreamWorks is also highly rumored for the upcoming theme park, so the How to Train Your Dragon plans may have moved to that park instead.

With multiple projects already in the works at the two existing theme parks and the water park, and with many resources being used to wrap up the design of the new park, it’s possible the Sinbad theater will simply sit unused for some time.

Thankfully, according to Orlando Informer, Universal has confirmed that they have no plans to kill off the extremely popular interactive talking fountain directly in front of the theater.

With the closure of Sinbad, Islands of Adventure will have no live arena-style shows left in the park. Universal Studios Florida has two: Animal Actors and Fear Factor Live. Florida will have only one live stunt show left in the entire state, the Indiana Jones Epic Stunt Spectacular! at Disney’s Hollywood Studios – but that show is also strongly rumored to be closing in the coming years.