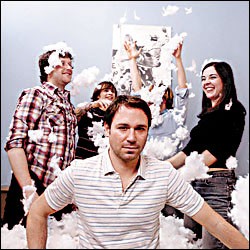 MATT POND PA Having shed most of his original band lineup, Matt Pond should now be referring to his act as Matt Pond NYC, since Manhattan is where he's based now and where he gathered up 60 percent of his current band. Still in the fold is cellist Eve Miller (Rachel's), but everyone else is new. And with the new personnel comes a slightly more rockist sound to Pond's weepy weenie-rock. Although no amount of rock power could make the sickly-sweet pseudo-symphonics of Matt Pond PA sound "heavy" or any such thing, the band's recent work is just as epic and atmospheric as before, but you feel a whole lot less wussy after hearing it. (with Spacebar, The Party People, Our Divided Fortune; 8 p.m. at The Social, 407-246-1419; $5, $7)

6TH ANNUAL FOLK ART FESTIVAL It's not very helpful to zero in on the annual House of Blues folk art festival. That's because it's blended into the mega-festival that brings together the Festival of the Masters art show, the Central Florida Chalk Artists Association's 6,000 square feet of sidewalk canvases and performance artists. It's safe to say, though, that once you land at Downtown Disney West Side, there will be colorful activities spilling into every available space. But for folk art, head to HOB to take in works by 40 locals and nationals, along with music. And HOB will offer tours through their indoor folk art collection, as well. One of the oddities in the event's mix is the LEGO Imagination Center's sporting display of a life-sized red Volvo made out of the plastic toy parts and a speed ramp for kids to race their own inventions. Bring money for the endless temptations of food and drink, and lose that fear of crowds. (9:30 a.m.-5:30 p.m. Friday-Sunday at Downtown Disney West Side; 407-934-2583; free)

THE FEVER Although The Fever have a pleasingly aggressive indie-rock approach and seem to be willing to be sloppy and powerful and angular, the fact remains that the New York group got a little bogged down with chalking up hip points on their first EP. After all, did they really cover a Sheila E. song because "The Glamorous Life" informed their sound? No. With their full-length debut, Red Bedroom, they've straightened themselves up a bit, fattened up their bottom end and dropped a few dozen irony pounds in the process. Nonetheless, they're still relentlessly cool, and at least they've got the chops to back up their poses. (with VHS or Beta, New Roman Times; 10 p.m. at The Social, 407-246-1419; $8) 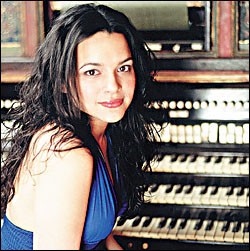 NORAH JONES Now, we know that she's from Texas and that she's got a voice that's as beguiling to the CMT crowd as it is to the Starbucks crowd, but no matter what she's singing, a cavernous rodeo environment just doesn't seem ... right. She's one of those singers who's a little long on subtlety and short on crowd-rousing raise-the-roof-isms. Whatever; regardless of the venue, we're sure it'll be a good show. We've recently managed to shake off the skepticism engendered by her initial popularity among the music-fans-who-don't-buy-music crowd, but we've come to the mature decision that you can't judge a musician by her audience. (Unless the musicians are Phish, that is.) We really like her organic and adaptable voice and the fact that she's not all whispers 'n' such when she sings. We also like the fact that after the success of her first non-jazz album got her pegged as a jazz singer, she decided to make an album that was even more non-jazz, as if to challenge those who insisted on filing her discs between their Herbie Hancock and Dave Koz CDs. (8 p.m. at Silver Spurs Arena at Osceola Heritage Park, Kissimmee, 321-697-3333; $49, $58)

BILLY BACON & THE FORBIDDEN PIGS Two decades on the road have made this San Diego group one of the most consistently impressive live acts around. Too bad not that many people care. Dishing out a shitkicking mix of blues, honky-tonk and full-bodied bar-rock, the Pigs boast a capable frontman in the form of the tubby guitar shredder known as Billy Bacon, whose energy and fretboard skills energize the band and audience incredibly. No, you won't hear anything at a Pigs show that you haven't heard before, but it's likely that you've never heard it delivered with as much energy as you will from this crew. (10 p.m. at Copper Rocket Pub, 407-645-0069; $5)

6TH ANNUAL ORLANDO BEER FESTIVAL Beer is big business. According to the U.S. Beer Drinking Team (no, really), in 2003, Americans spent more than $75 billion (with a "b") on "beer entertainment," an amount that easily beat out the $9.5 billion spent on "motion picture entertainment" in the same time period. So Universal's annual fall affair (www.orlandobeerfestival.com) has a built-in audience who come out to sample all the brews (included in the admission price) – 141 are currently on the list, from familiar to fancy. But there's a cheaper, if less intoxicating, way to load up on carbs at this deal. Register as a designated driver at the gate and get in free. They'll attach a wristband that means you can't drink alcohol, but you can receive complimentary water and soda at available venues. Best of all, designated drivers and all the other festival-goers can stuff their faces with as many $4 portions of CityWalk's food specialties as they can handle – jerk chicken, pork pincho, plantain-crusted mahi mahi sandwich and other highlights – and listen to music by the likes of locals Boxelder, Big 10-4 and the Monster Band. (3 p.m.-9 p.m. Saturday, $34.95; 2 p.m.-8 p.m. Sunday, $26.95, at Universal CityWalk; 407-224-5500)

THE VIRTUOSO PERCUSSIONIST Why do we love Evelyn Glennie so much? Not just because she played on a couple of Björk tracks, though we admit that's where we first heard her. Not because she's a wee lass who busted out of the burly-man bastion of the percussion section – in fact, she's the first and only full-time solo percussionist in the classical world – or because she has a weakness for bad puns (her series of percussion textbooks: Beat It). Not because she stretches the boundaries of the definition of "musical instrument": She plays a marimba made of plastic drainpipes and a repurposed car muffler. Not because she plays barefoot, although that's approaching the reason for our deep admiration: Glennie is 80 percent deaf and has been since childhood. She prefers that the focus stay on her music, but it's undeniably fascinating that a player with such command of nuance is actually feeling, not hearing, her music. (with the Orlando Philharmonic; 8 p.m. at Carr Performing Arts Centre, 407-896-6700; $12-$55)