Brought to our attention by TakePart.com this morning (what, you don't start your day with coffee and Facebook wildlife news?) was the fact that a brand-new, genetically distinct group of whales has been discovered off the coast of the Florida Panhandle. The majestic cetaceans are part of the Bryde's whale family, and may even be a genetically distinct species.

The scientific journal Endangered Species Research published a paper by Patricia E. Rosel and Lynsey A. Wilcox on the newly discovered pod of whales that states, "The level of [genetic] divergence suggests a unique evolutionary trajectory worthy of its own taxonomic standing."

But (sad trombone) the exact spot in the Gulf of Mexico where this group of about 50 Bryde's whales live is possibly the most dangerous place they could be in. Adjacent to the underwater canyon where the Deepwater Horizon oil spill happened in 2010, their underwater canyon home is surrounded by newly granted oil and gas drilling leases and subject to a constant barrage of airgun fire, as noted by National Resources Defense Council blogger Michael Jasny: "[The whales] have been struck by ships making their way to and from the region’s major ports. And new oil and gas leases are slated for the eastern Gulf, encroaching further on their habitat and adding to the risk of future spills." Since there are only about 50 of them, losing even one would be critical. (Rosel and Wilcox: "The small population size and markedly low genetic diversity raise conservation concern for this unique group of whales.")

Bryde's (pronounced "broodus") whales are about 40 feet long, and are part of the baleen whale suborder, meaning they feed on small fish, krill and plankton by filtering them through plates attached to their upper jaw, instead of chomping them with teeth. (Those nifty stripey throat pleats allow their mouths to balloon outward as they take in seawater during this process.)

"The Gulf of Mexico is the most heavily prospected body of water in the world," Jasny writes. The NRDC has petitioned to get the Gulf of Mexico Bryde's whales listed as an endangered species, which would grant the whale family certain protections under the Endangered Species Act. It would be pretty great if we didn't manage to kill off these whales so soon after discovering them. 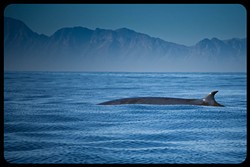