New theater at Pointe Orlando Regal squirts you with water and tickles your legs, among other things 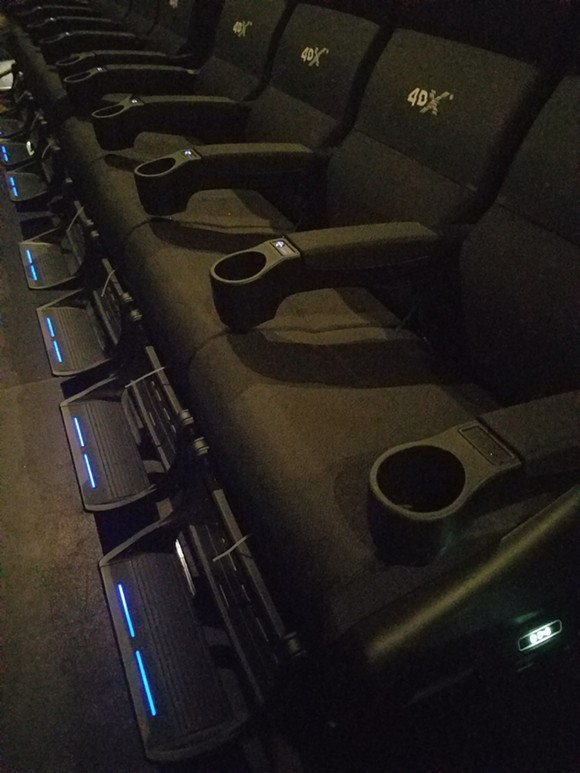 4DX Theater at Pointe Orlando
Just as the approvals move forward for the first new movie theater in the tourist district in over a decade, the Regal Pointe Orlando 20 & IMAX debuts one of the most technologically advanced theater experiences in the United States.

A single screen at the Pointe Orlando movie theater has been converted to 4DX, a fully immersive theater upgrade that has been popular throughout Asia. It features effects similar to ones found in a theme-park 4D attraction including , leg ticklers, water spraying, air jets, motion seats, fog and more. Some effects, like the fog, snow and wind, fill the theater, while other effects, like the leg ticklers and water spraying, are based around each seat. 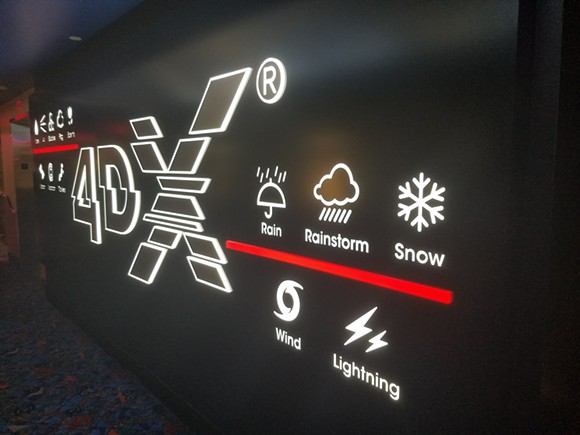 Photo by Ken Storey
4DX at Pointe Orlando
The Regal Pointe Orlando cinema is only the sixth in the nation to feature 4DX. New York City and the metro Los Angeles area have two 4DXs each, with another located in the greater Chicago area.

Tickets at Regal Pointe Orlando for the 4DX theater, which includes 3-D, are $19.89 for adults; a typical movie ticket is $11.89. At Fashion Square Mall the Premiere Cinema features a D-Box theater where guests watch the film in seats programmed to move with the film, in a similar way to the 4DX seats. Tickets for a 3-D movie with D-Box at Fashion Square is $17.

The D-Box seats are closer to the ground and have less motion than the 4DX seats. D-Box, unlike 4DX, allows for guests to select the intensity of motion they want to experience. 4DX seem to have more technology in the seats with vibrations of varying intensity throughout the seats, but the seats also seem to have less cushioning than D-Box’s. Seats in the 4DX sit higher than normal with a small foot pedestal. A leg tickler, similar to the Honey, I Shrunk the Audience or Shrek 4-D rides, is included in the motion seats along with air cannons on the head rest. A bar in the front of the seat features nozzles for water effects, which can be turned on and off via a button on the armrest.

Some 4DX effects, like bubbles and in-theater strobe lighting, are lost when wearing 3D glasses but others, like fog, pull the action on the screen into the theater.

Upcoming films slated for 4DX include Beauty and the Beast, Pirates of the Caribbean: Dead Men Tell No Tales, Guardians of the Galaxy Vol. 2 and War for the Planet of the Apes. No word on which of these films will be screened at the Pointe Orlando 4DX theater.