ZORA NEALE HURSTON FESTIVAL OF THE ARTS AND HUMANITIES Better known at this annual celebration of African-American culture is the food and music-laden street festival Friday through Sunday in Eatonville. Also of note at this year's tribute to writer Zora Neale Hurston is the ZORA! Celebration of New Black Cinema Film Festival that started Wednesday, Jan. 25, and continues through today with this lineup: Sweet Honey in the Rock: Raise Your Voice (9:30 a.m. at Universal Cineplex; $10), Al'leessi: An African Actress (1:30 p.m. at Universal Cineplex; $10), Tree Shade (4:30 p.m. at University of Central Florida; free), and Beah: A Black Woman Speaks (6 p.m. reception, 6:45 p.m. film followed by Q&A with director LisaGay Hamilton at Universal Cineplex; $20). (festival information 407-599-9930, 407-599-9963; www.zoranealehurstonfestival.com)

POP CULTURE BOOK CLUB We know, we know … you've avoided joining a book club because your reading tastes don't extend to geisha memoirs and purpose-driven lives. Well, what would you give to hobnob with other bookworms who think that Bruce Campbell's If Chins Could Kill is the best reason God ever came up with to kill a tree? That's the purpose of the Pop Culture Book Club, a monthly conclave of folks with one eye on the best-seller list and the other on the red carpet. The inaugural installment is devoted to movie-star biographies like Campbell's aforementioned chin-wag and Get Happy: The Life of Judy Garland. Now, you may be forced to make nice with a gabby aficionado of Chuck Norris' Against All Odds: My Story, which is also on the club's reading list. But the way we see it, Chuck Norris beats Judith Krantz any day. (7 p.m. at Orlando Public Library; free; 407-835-7323)

PRESERVATION HALL JAZZ BAND The famous Preservation Hall in New Orleans' French Quarter is closed indefinitely due to Hurricane Katrina, but the jazz band is out on tour and making a two-night stand at Rollins College before heading to Minnesota and then Bermuda. Those lacking soul may find it easy to dismiss the overplayed culture of New Orleans, but those with true heart can't help but break down and melt into the strange fusion that's known as New Orleans jazz. The Bach Festival Society is hosting these enchanted evenings in the new 400-seat Tiedtke Concert Hall in the music building. Those who can't attend but are supportive of the Preservation Hall's mission can make a donation at www.preservationhall.com. (8 p.m. Friday at Tiedtke Concert Hall, Rollins College; also 10 a.m. Saturday; $45 Friday, $12 Saturday; 407-646-2182)

ORLANDO PREDATORS It's time for those bad boys to kick off their 15th season full of balls, beer and babes of a sport that's best described as a cross between championship wrestling and professional football. Led by coach Jay Gruden – recently voted the fourth-greatest player in Arena Football League history – our Preds jump onto the field against the Georgia Force at Philips Arena in Atlanta. There's not going to be a TV broadcast but you can catch the game at www.arenafan.com, which promises a webcast loaded with play-by-play coverage and miscellaneous visuals supplied by the Preds' dance team. (Who knew you could look at hot girls on the Internet?) We know this because everything a wannabe fan needs to know about the Orlando Predators can be found at ArenaFan Online, touted as "The Complete Arena Football Resource." (7 p.m. at Philips Arena, Atlanta; tickets and information, 407-447-7337; webcast at www.arenafan.com)

ORLANDO GUITAR EXPO If there's one thing Orlando has in surplus, it's musicians who like to spend money on gear. We have a theory that correlates the per-capita number of music stores to the level of bland professionalism in a city's music scene, and the profusion of shops in Orlando peddling cheap Korean axes to starry-eyed mooks is one of our supporting calculations. That said, this Expo is not about $79 Strat knockoffs, and filling the vast expanses of Osceola Heritage Park's Exhibition Building will be the sort of things that make true guitar nuts drool. From vintage pedals to various six-string oddities, this is the place to go if you're a guitar freak in search of a fix. Poseurs need not embarrass themselves. (10 a.m.-6 p.m. Saturday, 10 a.m.-4 p.m. Sunday at Osceola Heritage Park Exhibition Building; $10; 321-697-3300)

TRIBAL NOCTURNE BELLY DANCE SHOW Trimmed out with zills (finger cymbals) and coin belts, area dancers devoted to belly-centered, drum-driven movement come together for a one-night mystical exchange. The community is invited to share the energy – physical and spiritual – that will be running high during this evening performance following a weekend of workshops. The artists taking the stage include the Enlightenment Dancers, Shri-Shambhala, Troupe Zahara, Samadhi, Dunyavi, Adelpha, Loud Zoo and Tribal: Pura. (8 p.m.-10 p.m. at Discount Music Center Studio; $15; 407-423-4171; www.tribalmuses.com/pages/10)

THE BLACK CROWES Anyone who saw the jaw-droppingly fabulous show the Crowes put on at House of Blues on the first leg of this "reunion tour" knows that, Lions aside, these guys constitute one of the finest examples of American rock & roll treading the boards right now. Dripping just enough jam-juice into their groove-rock hooch, the Brothers Robinson effortlessly impress with a complete command of rock's broad, blues-based vocabulary. If you missed 'em the last time, don't make the same mistake twice. (7 p.m. at Hard Rock Live; $40-$65; 407-351-5483) 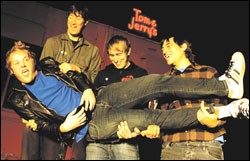 NEW MEXICAN DISASTER SQUAD The big news isn't that NMDS have gone and gotten themselves signed to fab indie label Jade Tree, home of Strike Anywhere, Joan of Arc, Pedro the Lion and quite a few of your other favorite bands. Sure, that's good; after wrapping up their record early last year, it looks as if the disc will finally see the light of day on a label that will treat it right. But the really BIG news is that these hardcore homeboys are finally playing a show in their own goddamn town, which makes us pretty happy. It's great that they've been staying busy delivering their gospel to punks all around the country, but we need some love here too, y'know? As one of the few Orlando punk bands that actually sounds like a punk band – rather than an amalgam of marketable trends – we're pleasantly surprised that NMDS' ferocious approach is winning over as many fans as it is. Perhaps it's possible that there are other people who are just as tired of pretty-boy fashion-punks as we are? Naaah. (with Western Addiction, Polluted Youth, Monikers; 7 p.m. at The Social; $7; 407-246-1419)

STOMP In our darkest imaginings, we like to think that the cast of STOMP used to get chastised by their mothers for making an infernal racket around the house when the poor, martini-besotted dears just needed a moment to sit still and THINK! There's no other backstory that fully explains the phenomenon of grown men and women touring the globe eagerly pounding on garbage cans, hubcaps and any other vibration-conductive material they can get their anarchic little hands on. Judging by the show's return to Orlando for more guerrilla-rhythmic mayhem, there are a lot of you out there with unresolved quiet-time issues, too. (8 p.m. at Carr Performing Arts Centre; through Feb. 5; $28-$48; 407-849-2020)