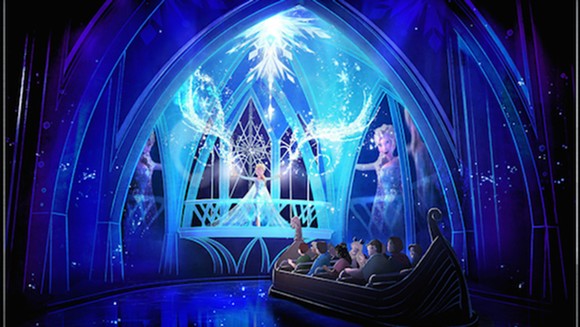 Photo via Disney Parks Blog
Whether you're a fan of Frozen or would rather see Disney just let it go, there's no stopping the frozen fever sweeping into Epcot this summer.

According to the Disney Parks Blog, the new Frozen attractions are set to open in June.

These new chilly offerings include a boat ride, Frozen Ever After, which is replacing the Maelstrom ride once found in the Norway pavilion in Epcot's World Showcase.

According to the blog, the ride will take visitors on a boat tour of the Kingdom of Arendelle where "guests will be transported to the “Winter in Summer” Celebration where Queen Elsa embraces her magical powers and creates a winter-in-summer day for the entire kingdom."

The tour will include a stop in Troll Valley and a visit up North Mountain to Elsa's Ice Palace before returning to the Bay of Arendelle.

The blog states that the original voice cast from the Frozen films returned to record new dialogue and songs specifically for the new ride.

During a media preview on Tuesday, Michel den Dulk, executive creative director for Disney Imagineering told WESH that the ride will include audio-animatronic figures and special effects and that the song “Let It Go” will make an appearance during one of the ride's key scenes.

The other new attraction coming to the pavilion is a new meet-and-greet area called the Royal Sommerhus, a Norwegian countryside cabin where royal sisters Anna and Elsa will be accepting visitors.

The Orlando Sentinel learned that the Maelstrom will live on in the area, as two of rune rocks from the original attraction will be placed near the entrance of the new meet-and-greet space.