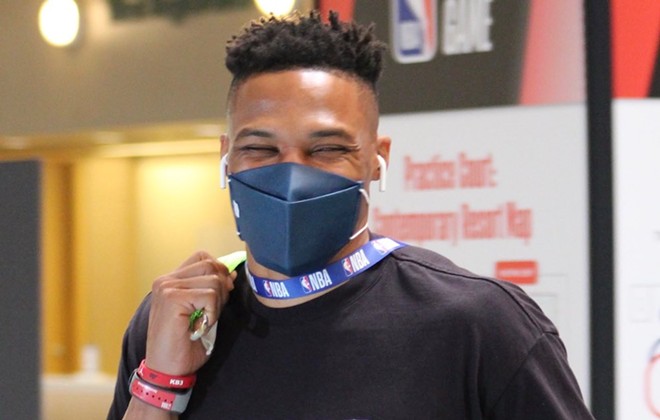 Photo via NBA/Twitter
Russell Westbrook of the Houston Rockets checks in for practice in Orlando.
When the NBA starts up its new, abbreviated season from inside "the bubble" at Orlando's ESPN Wide World of Sports complex, the league will signal it values the lives of Black players and fans with large decals reading "Black Lives Matter" on the courts.


Here is the NBA restart court in Orlando: the spaced out chairs are the socially distanced bench, Black Lives Matter is written on the court. pic.twitter.com/XGJu1w4QLC

As with the addition of Black Lives Matter murals on city streets nationwide, including the one in downtown Orlando on Rosalind Avenue, the statement itself accomplishes very little — but these messages are visual reminders of the persistent and unsatisfied need to protect the lives of Black people through widespread changes to law enforcement, the courts, local and state government, the media, sports, and in many more venues.

Basketball's battle for racial equality began well before the murder of George Floyd by Minneapolis police officers. It predates the BLM movement, with efforts by Black players and coaches to overturn racist policies, both official and unspoken, since the beginning. In the early 1950s, for example, when Celtics owner Walter Brown broke basketball's color barrier, there was a tacit agreement among NBA team owners that no more than two Black players could appear on a roster. Later, the limit was raised to three.

In June, Andrews reported on a joint statement by the NBA and the National Basketball Players Association, establishing that "the goal of the season restart in Orlando will be to take collective action to combat systemic racism and racial inequality across the country."

That meeting was hosted by NBA commissioner Adam Silver, NBPA executive director Michele Roberts and NBPA president Chris Paul, along with guards from several teams, including Trae Young of the Atlanta Hawks, CJ McCollum of the Portland Trail Blazers, Malcolm Brogdon of the Indiana Pacers and Donovan Mitchell of the Utah Jazz.

The June release noted that "specific plans were not finalized," but they began talks about plans to increase Black representation across team staff, front offices and in the league office, as well as an intention to work with more Black-owned businesses and vendors. The meeting also led to the announcement of an upcoming foundation with a goal to "expand educational and economic development" in Black communities.


“The way we change the future is by participating in it.”@staceyabrams shares with @Money23Green how voting is the key to being an active member of society. pic.twitter.com/zG8zPfAXUH

In early July, Republican U.S. Senator from Georgia and co-owner of the WNBA's Atlanta Dream team, Kelly Loeffler, wrote a letter to the WNBA commissioner to express her opposition to the Black Lives Matter movement.

"The Black Lives Matter political organization advocates things like defunding and abolishing the police, abolishing our military, emptying our prisons, destroying the nuclear family," Loeffler said. "It promotes violence and anti-Semitism. To me, this is not what our league stands for."

Loeffler, who was cleared last month by the Senate Ethics Committee on complaints she profited from insider trading based on federal coronavirus intelligence, now says, "I've always been supportive of my team, though I know we may have different views."

The WNBA announced on Thursday it would not force Loeffler to sell her stake in the team.

Pro basketball's media partners like the NBA on TNT feature a steady stream of social justice messages and interviews, like a conversation between Draymond Green of the Golden State Warriors and former Minority Leader of the Georgia House of Representatives (and almost governor) Stacey Abrams, about the importance of voting.

In light of a recent estimate that 81.1 percent of all players in the 2019-20 season are Black, it makes additional sense for the NBA to commit to Black-focused promotions, spotlighting mostly Black players in individual profiles and releasing a promo video by producer and actor Issa Rae, best known for her HBO series Insecure.

"You know how they say you don't miss something until it's gone?" Rae asks in the video. "Well, we've definitely been missing this."

"Thankfully, the wait is over, because it's all back — well, with a slight twist," Rae says. "It's the game you love, like you've never seen it before. Twenty-two teams, all in once place, ready to make history."

As of Monday, the NBA reports zero out of the 322 players in the Orlando bubble have tested positive for COVID-19.

It is all indeed historic.