Be careful what you wish for

At this time one year ago, Disney's theme parks were experiencing historically high attendance, and I was there in the midst of the mob, cursing the crushing crowds. I fantasized about returning to a time decades ago, before the attractions became overrun with guests, when you could walk into your favorite rides and restaurants without booking FastPasses and dining reservations months in advance.

Well, be careful what you wish for, because you just might get it.

Last week, I returned to the Magic Kingdom for the first time since the coronavirus quarantine closed down the Walt Disney World resort in March, and the experience exceeded my wildest dreams while simultaneously evoking my darkest nightmares. 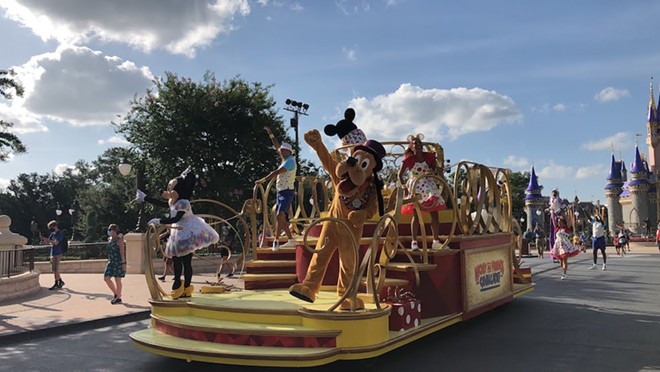 Photo by Seth Kubersky
Minnie and Pluto decline to mask.

After five weeks of watching how Universal Orlando has handled social distancing in their parks, I thought I had a pretty good handle on how Disney would cope with COVID-19. But after attending both an annual passholder preview and the park's official public reopening, it's apparent that the Mouse has put that extra month to good use. The differences between Universal's and Disney's safety protocols are subtle yet significant, and they may make the difference between whether you choose to return to the magic or remain distanced from Disney.

Many of the same basic health precautions are observed at all of Orlando's major attractions: touch-free temperature checks before entry, mandatory face masks for everyone, stepped-up sanitizing, and markers reminding everyone to stay separated by at least six feet.

Photo by Seth Kubersky
Cast members wear both masks and transparent full-face shields, making them look like members of a dystopian empire.

But Mickey has taken these measures a step further.

Guests' masks must be two-ply with ear loops (my preferred neck gaiter is verboten) while cast members wear both masks and transparent full-face shields, making them look like members of a dystopian empire. Switchback queues have been converted into claustrophobic mazes of plexiglass walls, and ride vehicles are regularly stopped and sprayed down with disinfectant. Every trash can carries a safety reminder, and multiple times each hour the cheerful background music is broken into by announcements encouraging hand hygiene.

As if to compensate for all those real-world intrusions into the "most magical place on earth," Disney has drastically limited the park's attendance, leaving it emptier than I've seen since the days after 9/11. 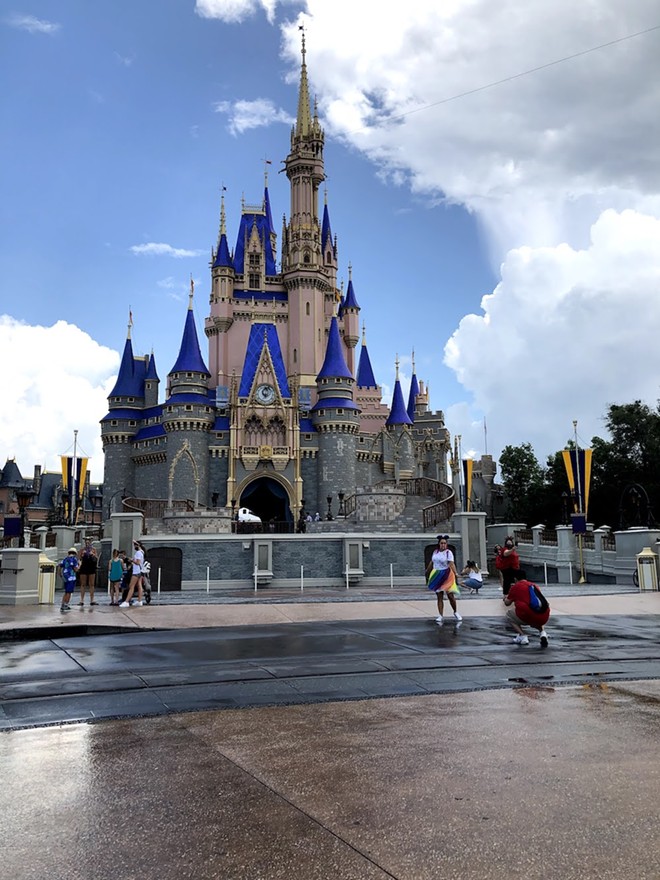 Photo by Seth Kubersky
The park is emptier than it's been in 20 years.

I easily experienced over a dozen of the Magic Kingdom's top attractions in under eight hours, never waiting more than 30 minutes for a ride, and often walking right on to headliners like Space Mountain and Seven Dwarfs Mine Train.

In fact, the most aggravating part of this eerily utopian "new normal" is that paid-in-full annual passholders are sold out from the park's new required reservations system until sometime in August, while day guests can still walk up to the ticket windows and purchase admission.

Disney's princesses apparently refuse to wear masks, and the standoff with the Actors Equity performers' union over testing continues, so the park's usual meet-and-greets and live shows are all still on hiatus. Instead, they've substituted frequent mini-parades and balcony appearances where long-distance selfies with the characters can be captured; Cinderella's stepsisters snarking on guests from the castle's parapet is priceless.

I'm a self-admitted lifelong theme park junkie, and obviously not entirely unbiased. So for a different perspective, I turned to Genevieve Bernard, an attractions agnostic who ordinarily insists on exiting any amusement park after four hours, but who agreed to endure an entire Disney day with me in the name of journalism (and also because she's my wife):

"I'm usually overwhelmed by the super-crowded WDW experience and have been known to call it 'Miserable Disney.' But there were silver linings that I hope Disney keeps and builds upon. Significantly smaller crowds made for a quality experience. There was less dodging and dashing to avoid people coming at you, and you could see where you were walking in front of you. I noticed and experienced more decor, colors and landscaping because I could see them, and I actually enjoyed walking through the park!

"Social distancing markers in lines made the experience more positive, and I hope they stay forever. It definitely felt like everyone was on their best behavior, and it was nice to not have people on top of you all of the time. No park-hopping, no scheduled events, open space and social distancing all made for less anxiety and less manufactured FOMO, which I felt made an overall more pleasant experience even with a mask on.

"Having said all that, I was very nervous about going, and with virus numbers increasing, I'll wait a while before I return."

Disney has admirably gone above and beyond in many ways, and although there are still some gaps (they need more mask-optional relaxation areas, and I wish they'd require every rider to use hand sanitizer like Universal does, rather than simply making it available), I felt safer spending a day at Disney than an hour in my local supermarket.