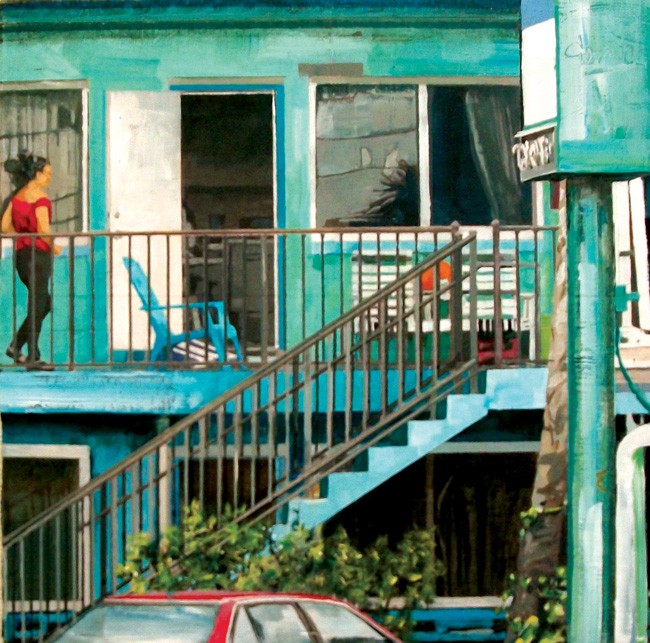 Ajaunt to New Smyrna, one of Orlando’s favorite beach towns, will yield beach-town stories of a different sort. Bryce Hammond has applied his studied eye to the gritty 1960s architecture of Daytona’s economy-class hotels, and his new show at New Smyrna’s Arts on Douglas gallery reduces them to their minimalist essence. Taken together with stencil paintings reminiscent of street art, his psychologically haunting paintings of “motor hotels” suggest stories a bit different than the usual Florida vacation tales.

Red Riding Hood, Escape to Florida, Saxony and Lighthouse Inn are each a series of square paintings on panels, and the series really begins in the middle. The fourth painting of each group is Hammond’s traditional crisp and brightly colored compositions and textures limning the patterns formed by the metal stairs, canopies and windows of Florida motel architecture. “Red Riding Hood Inn 1” includes a woman wearing red standing by a white door on a balcony with a stair slicing diagonally up the painting. The next painting to the right fuzzes nicely into an impressionistic version of the same scene.

To the left, however, the image is stylized. The woman is gone, but the red of her dress stains the door; it remains crisp but distilled. The next painting and the next reduce the scene, transforming it into a figure/ground tied to the original picture yet something wholly its own. The effect intensifies the desolation of the original image.

Hammond has also created a triptych of figures, poignant studies of human destitution against a backdrop of beach retail in “Tshirts, Novelties, and Sundries.” Rendered using stencils and spray enamel, the figures evoke the techniques of street art. Hammond then places the same figures in other paintings, often in a void, as in Park Bench, a series of three paintings of a figure sprawled on a park bench.

Hammond “jumped the curb” from graffiti artist into the gallery, but continues to stay in touch with the street. His ongoing study of Daytona motels will, he stated at the opening, include filming the coming spring break crowd, where he hopes to choreograph a series of new images. With one foot in the alley and one in the gallery, he brings us a romantic’s view of the decaying surfaces and forgotten spaces of the built environment. Yet the joyously bright colors and energetic details seem to be a glittering surface over a hollowness within, suggesting a dark side to humanity’s urban triumphalism that has yet to be revealed.