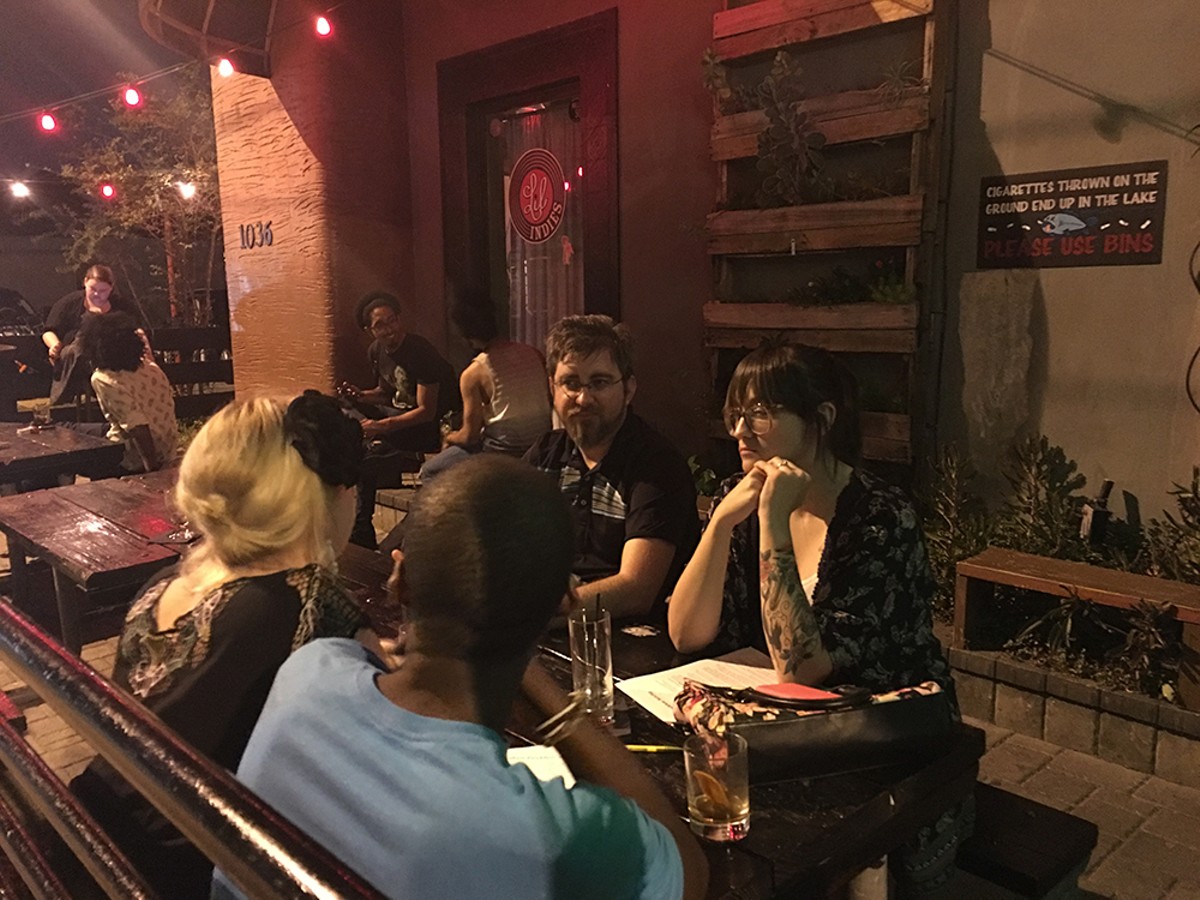 T. S. Eliot said "April is the cruelest month," and his epigram was especially apropos this year. Since January, 2016 has brought more than its fair share of grief, and the final days of last month sealed the deal with the death of Prince. While fans worldwide mourned the loss of the Artist Formerly Known as the Symbol, Orlando's local arts community was rocked by a pair of deaths closer to home. The deaths of comedian Matt Gersting and visionary artist Morgan Steele were the kind of senseless tragedies that inspires one to drink oneself senseless. But as seductive as it sounds, intoxication doesn't solve any problems, so I went searching for a more creative way to toast these talents' passings. That's how I ended up on Mills Avenue on a Wednesday night, an hour before Eugene Snowden's Ten Pints of Truth was scheduled to take the stage, with a chocolate porter in my hand. I wasn't really at Will Walker's Lil Indies for the beer buzz or the beats, but rather to wash away April's bitter taste with a bit of Drunken Problem Solving.

While inside Lil Indies they were gearing up for the evening's show, out on the patio Trevor Fraser – past Orlando Weekly staffer and current Orlando Sentinel contributor – was reading a theoretical scenario to a picnic table of assembled participants: "Super powers are real, though currently only available for the very wealthy. The powers are random and rare. Government agencies have no mechanisms in place for controlling these people, but they're looking into it. And other companies may make it more affordable." Once the premise had been set, players split into teams of two or three and began to vigorously debate the various challenges and intended consequences that such a super-power explosion would effect in our society.

It may sound like a preposterous situation to be passionately arguing over, but it instantly sparked spirited discussion and non-linear thinking. As Fraser told me, that's precisely the point of Drunken Problem Solving, more than any actual drinking.

"It's Drunken Problem Solving in the same way that there's a martial arts form called Drunken Crane [or] Drunken Boxing. You don't have to actually be drunk. It's just that the thought process is not the tightly controlled process they use in Future Problem Solving," a similar but far more serious global competitive problem-solving league that Fraser was inspired by. "The original game is very heavily judged. I'm not going to penalize people for using absolute verbs."

Fraser founded Drunken Problem Solving one year ago at Graffiti Junktion, and relocated it to Lil Indies in October. It's held on the last Wednesday night of every month, with the winning team awarded a $20 bar tab. The game is broken into two rounds: Teams come up with challenges caused by the scenario in the first round and solutions to the most pressing problem in the second. Fraser devised the scoring rubric and writes the imaginative backstories himself, which have ranged from universal adoption of fusion energy to discovering that Santa Claus is real. (Teams decided St. Nick would be a major disease carrier.) He also judges the entries himself, because "there's too much to read to do it by audience response, [and] it's very hard to get people to come out and do things like judge."

Drunken Problem Solving typically attracts a couple dozen players, including regulars like Aubrey Hess, a freelance costume designer. "I think a lot of it has to do with the camaraderie. I know everyone who comes to this at least a little bit, and because of that camaraderie everybody brings something to the table. Everybody has different smarts," she told me before returning to a heated back-and-forth about parental responsibility for an invisible child, footnoted by references to Animagus registration in Harry Potter.

"I'd really love for this to wind up giving me an actual team to coach for a real Future Problem Solving competition," Fraser told me shortly before I (soberly) drove home. In the meantime, if anyone needs a thorough examination of the legal, ethical and economic impacts caused by the rampant proliferation of supernatural abilities, drop Fraser a line at facebook.com/ drunkenproblemsolving. I'll be safely at home on my couch, reading my well-worn copy of Watchmen and hoping that April showers really do bring May flowers.