Local leaders look back on Pulse at WMFE panel

Photo by Monivette Cordeiro
Almost nine months after the attack by a gunman that killed 49 people at the gay nightclub Pulse, local leaders sat down to talk about how the tragedy impacted them and the community at a panel hosted by 90.7 WMFE's Matthew Peddie.

The panel was part of the "Taking Your Pulse" project, a collaboration between WMFE and StoryCorps, a New York-based project that travels the country recording and sharing American stories. Panelists included a survivor of the June 12 shooting; a doctor and nurse from Orlando Regional Medical Center; Mayor Buddy Dyer; Orlando Police Chief John Mina; Christopher Cuevas, executive director at QLatinx; and Terry DeCarlo, executive director at the GLBT Center of Central Florida.

Dyer says some of his first thoughts when he was rushing to the scene of the massacre were how he could be the most helpful to the community.

"I've been told by other people that deal with terrorism … that ordinarily the way that communities respond to terrorist acts are either with immediate fear because they don't know what's going on, or hatred and anger toward the individuals that have committed the act," he says. "Instead, our community, because we encouraged them to, was able to respond with love, and compassion and unity toward each other." 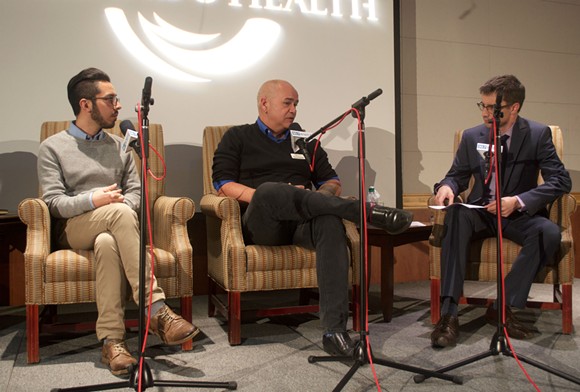 Photo by Monivette Cordeiro
Cuevas says many of the services that sprung up after Pulse weren't immediately accessible to victims' families, survivors and other members of the LGBTQ community because they weren't in Spanish.

"Because this happened on Noche Latina, there was a need for communication to speak to a community whose first language may not be English," he says. "It was hard to have people not know what's happening or have that second-hand knowledge being passed on in broken translations. It just showed there were things that needed to be put in place to ensure the communities got the information that they need."

DeCarlo says although it's been several months now since the mass shooting, many people are still struggling to heal and learn how to deal with the new normal.

"It's still rough," he says. "People are still going through a lot. It's going to take a while. One thing we did do is we brought in counselors that are now at The Center every single day. People don't need to make an appointment. If you're feeling down, if you're hurting, if it happens to be one of those memorable moments and you just feel you need to walk in the door and say, 'I need to speak to somebody.' And somebody will be there."

The interview is pretty long but definitely worth your time. You can listen to the entire recording of the conversation at WMFE here.