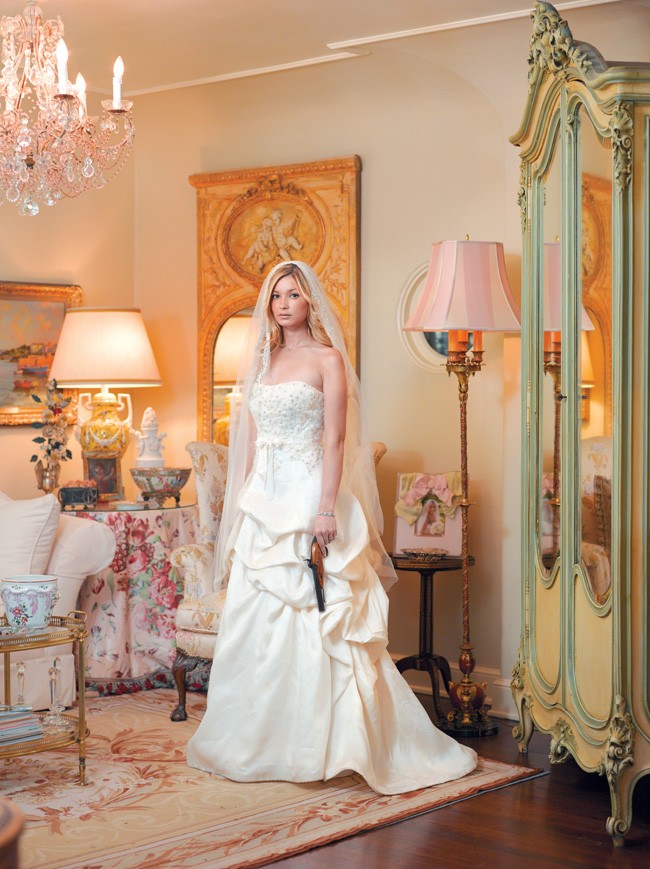 M y art world friends really thought this project was misguided on my part,” says New York-based photographer Lindsay McCrum. “But I think that if you have a curiosity about something, you should pursue it.” The result of her perseverance is the book Chicks With Guns, a collection of 78 stunning portraits of American women gun owners. They are young and old, hunters in wood and field, law enforcement officers in uniform and collectors of historic arms seen in period dress. Some are seen with their children; others are children. They come from a broad range of socioeconomic backgrounds. All carry guns.

But McCrum has avoided bending to polemic in this highly politicized realm. “These are photographs,” she says. “Not policy or advocacy.” Trained initially as a painter with an MFA from the San Francisco Art Institute, McCrum uses the skills of classical composition in the photographs, referencing the military portraits of Velasquez and Gainsborough’s domestic scenes to evoke a sense of feminine empowerment. When she started the project four years ago, McCrum intended only to photograph 10 or 20 women for an exhibition. But the women she first photographed suggested friends, and soon networks of gun owners were discovered spanning several states, including Montana, Minnesota, North Carolina and Texas.

McCrum asked her subjects to add text to the images. “When you look at a portrait, you project all sorts of assumptions and beliefs about who the people are, especially when you add the gun,” McCrum said. “But when you read their stories, there is an enormous diversity.”

Sportswoman and hunter Heather Kraft of San Antonio, Texas, says her father gave her her first gun, a .22 rifle with a scope cut down to her size, when she was 6 years old. Now she has her own child. “As the only daughter and granddaughter surrounded by cousins and uncles, I’m so glad I had a boy instead of a girl,” she said. “I don’t know what to do with Barbies and all that stuff. I never played with dolls – I had horses and G.I. Joes.” Kraft’s son, now 18 months old, recently joined the family during the annual Thanksgiving pheasant hunts at their ranch. “Technically, the first time he went shooting was when I was five months pregnant with him,” she said. “I wondered if the noise would hurt his ears, but when I asked my doctor about it, he said ‘I don’t think so, but you’re the first I’ve heard ask.’ When he was 8 months old, I put big earphones on him and bundled him up, and we went hunting. He was in the middle of everything and loved it.”