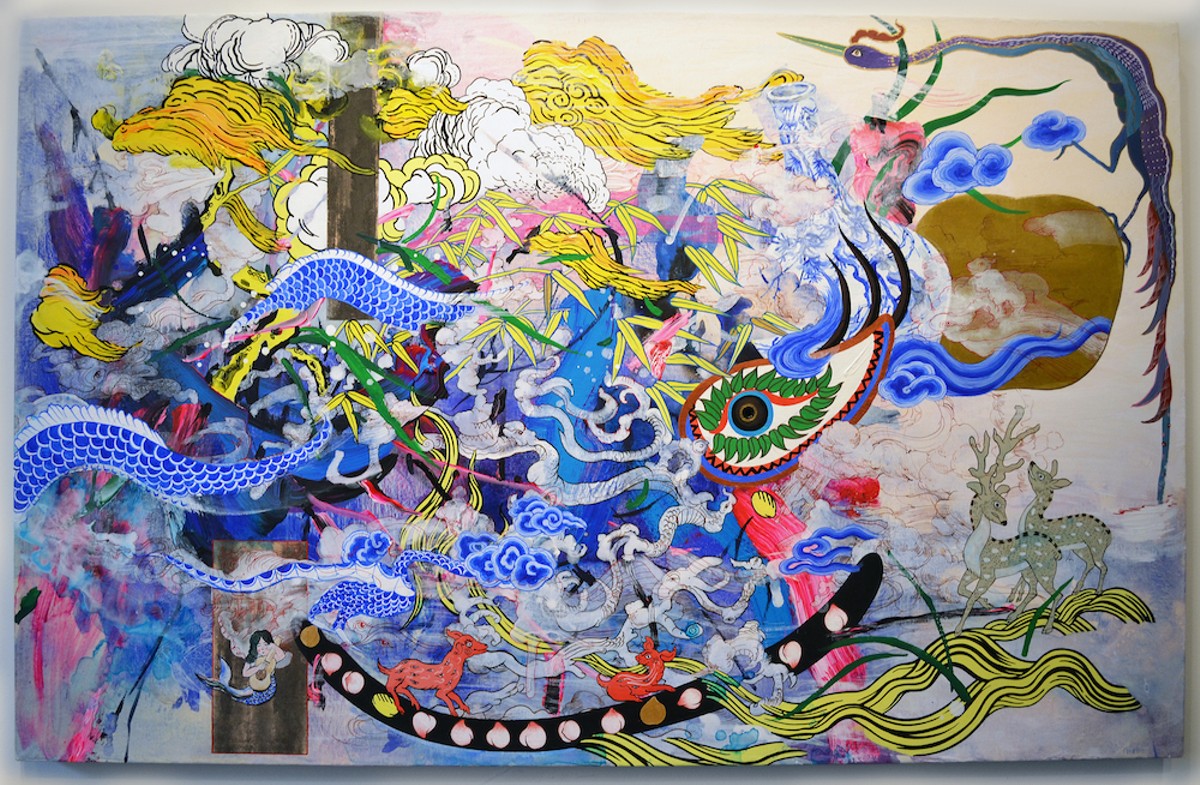 The solo exhibition traveled far and wide before landing in Orlando. It premiered in Roanoke, Virginia, in 2015 and has since toured mostly mid-sized Southern cities and college towns.

"The show is meant to raise questions about who we really are," says Moon in an email exchange. "We've traveled through the conservative South representing a more hybrid and diverse aspect of America, one that tends to be dismissed."

The word "hybrid" is crucial here. Each of Moon's works – like each individual's personality – is a mosaic of different influences, bounded by the horizons of geography but not exclusively determined by place of origin. While diversity suggests that we're all essentially different but can get along nonetheless, hybridity shows us that we're all made from the same stuff, just arranged slightly differently.

Moon's work mashes up traditional symbols, folk expressions, corporate logos and emojis – and that's just on the level of content. On the level of form, the artist combines media as disparate as traditional, handmade Korean Hanji fabric and über-modern synthetic acrylics.

"I love acrylic paint," says Moon, "because it's such a young material. It's still evolving and changing. I think acrylic paint and Hanji paper are a great marriage."

Her norigae series takes a traditional Korean charm and turns it into a platform for global bricolage. Moon's 19 outsized norigaes are deconstructed voodoo dolls assembled from hair and found objects from around the world.

Sometimes, however, instead of juxtaposing, Moon makes one single symbol work double duty. The peach, official fruit of Moon's adopted home state of Georgia and a potent symbol of prosperity in Korea, is ubiquitous here.

Double Welcome was brought to the Mennello by museum director Shannon Fitzgerald. She was drawn by the nuance of Moon's work and its sly, subversive humor. Orlando was not on the touring exhibition's original itinerary, but Fitzgerald just had to have it. 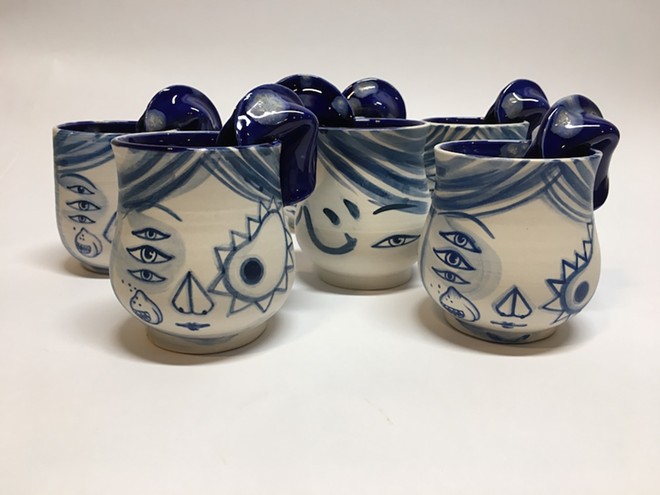 Although the show has mostly remained the same over the years, Fitzgerald did invite Moon to create some new work for the Mennello. The artist agreed to craft a special series of 20 signed and hand-painted porcelain vessels (seen at right).

"Jiha gets to larger ideas of cultural exchange and appropriation in a way that's more complex than the usual binaries, east versus west or superior versus inferior," says Fitzgerald. "Her work breaks down differences through humor. Difference is desirable in Jiha's world. It's not necessarily bad."

The exhibition is also part of a broader strategy to make the museum more inclusive. Although the official name of the institution is the Mennello Museum of American Art, Fitzgerald wants everyone to know it's not about mom and apple pie.

"I've been tasked with expanding what we mean by 'American art' here," she says. "That means exploring diaspora neighborhoods, cross-cultural exchange and contemporary art. An artist like Jiha covers the whole spectrum. Her work is a bridge to not just traditional Korean art but also contemporary American and international art."