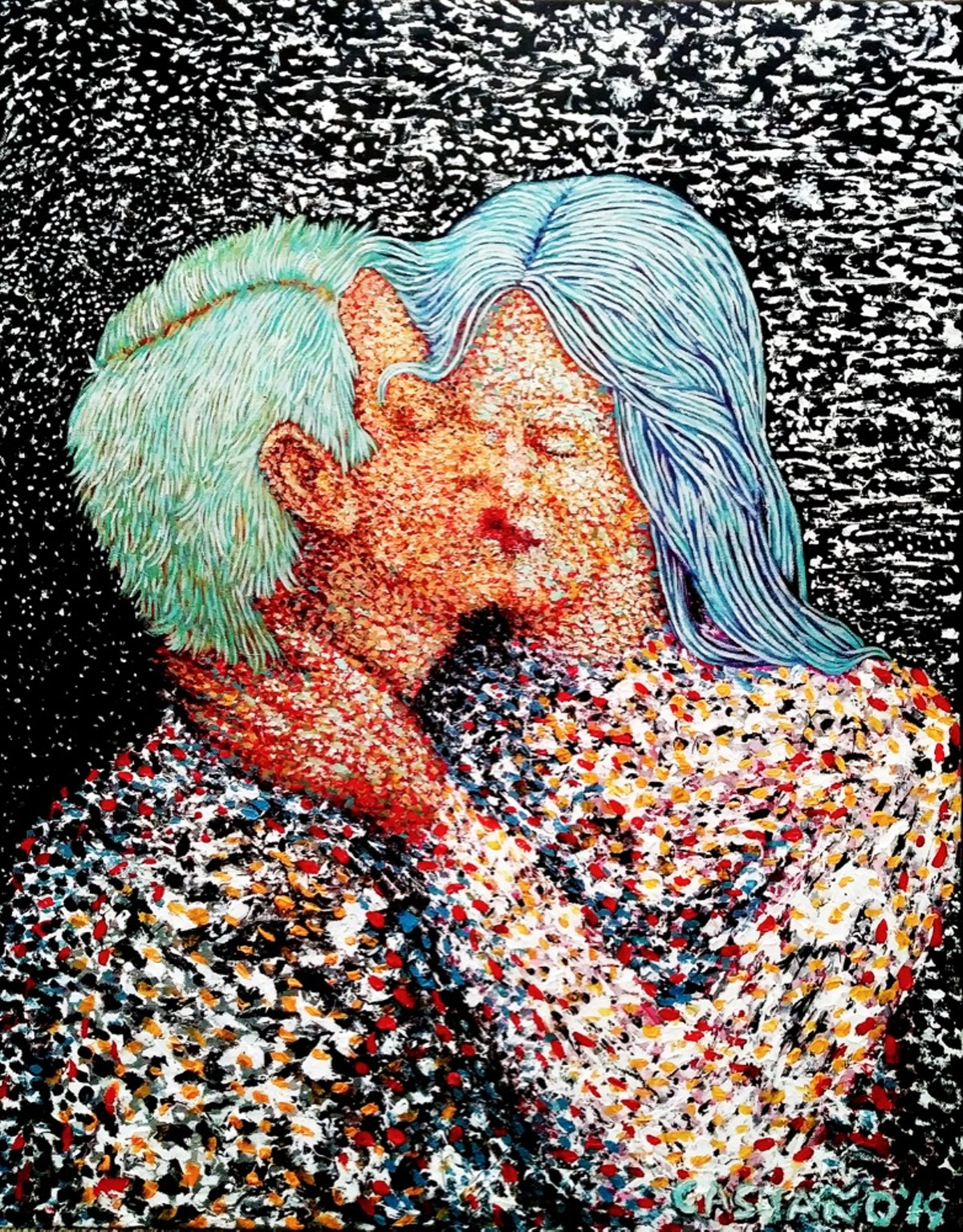 When I first encountered Kieran Castaño's paintings and comics in early 2017, the artist was nursing wounds fresh from the 2016 election. Castaño channeled the energy of resistance by celebrating identities marginalized by Trump and the violent white nationalist movement invigorated by its return to a mainstream platform. As we reach the end of 45's first term and the November 2020 election approaches, the myriad of issues broached in Castaño's work remain relevant. Castaño has honed his pointillist, illustrative style during these past few years and found a powerful artistic voice in pastiche references to art historical canon, popular culture, and politics.

The work Castaño created in 2017, including the series Trans Portraits and several paintings referencing Caravaggio's painting "David With the Head of Goliath" (ca 1610), grew into the oeuvre on display in A Certain Kind of Light, a solo exhibition of his art at Mills Gallery.

Painting by Kieran Castaño
"Stand Up"

Consistent throughout Castaño's works in various two-dimensional media is a distinctive pointillist style of mark-making, which he describes in a recent video interview with the show's curator, Nathaly Ruiz. Castaño, who has autism, likens the repetitive physical motions required to paint in this style to the repetitive body movements referred to as self-stimulating behavior, or "stimming," common in folks with autism: "The only way that I can make art, from me, and not get tired ... is if I paint in this style where I'm actually physically releasing energy into the painting." The paintings Castaño has created through this process seem generative of energy, as well – incisive from a distance and abstract at close range, their subject matter as well as their form facilitating empathetic responses.

“The only way that I can make art and not get tired is if I paint in this style where I’m actually physically releasing energy into the painting.”

Castaño's "Thank You," painted in 2019, is a simple and poignant depiction of a casket adorned with flowers and draped in a shroud emblazoned with Donald Trump's tweets regarding his imposition of a ban on trans people in the military. This painting has become hyper-relevant recently as tensions between the U.S. and Iran rise after Trump ordered a U.S. airstrike on Baghdad that killed Iranian Gen. Qassem Soleimani. 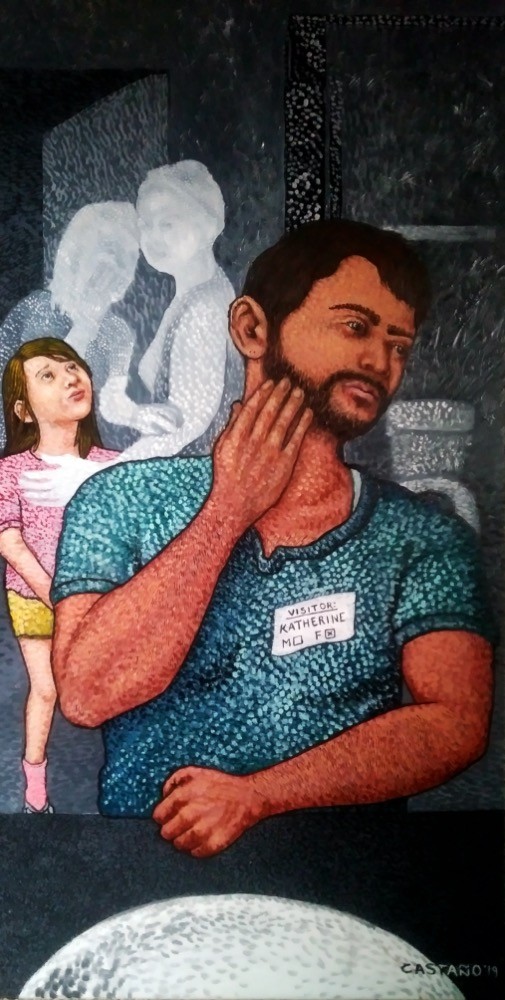 "What's the Issue?," painted in 2019, depicts a man gazing into the mirror in a women's bathroom to check his facial hair, wearing a clearly misgendered nametag ("Katherine"). The reflection reveals a young child looking, confused, toward an obfuscated parental figure, ostensibly due to the masculine figure so out of place in the women's room. This painting reveals the on-the-ground realities of so-called "bathroom bills," such as the one overturned in July of 2019 by a federal judge in North Carolina, that ban trans people from using the restrooms on state property that best fit their gender identity, and force them to use the one that matches the sex listed on their birth certificate.

In his artist statement, Castaño says, "I use color as light to shine on Trans subject[s] and related themes. To me, color used as light represents wisdom, truth and self-love gained from our unique journeys to find and know our true selves. I use pointillism to bring out the authenticity of every color within ourselves."

As those in power continue to engineer marginalizations of so many individuals based on their identities, self-representation and an awareness of the intersections of public and private life become valuable tools of resistance. 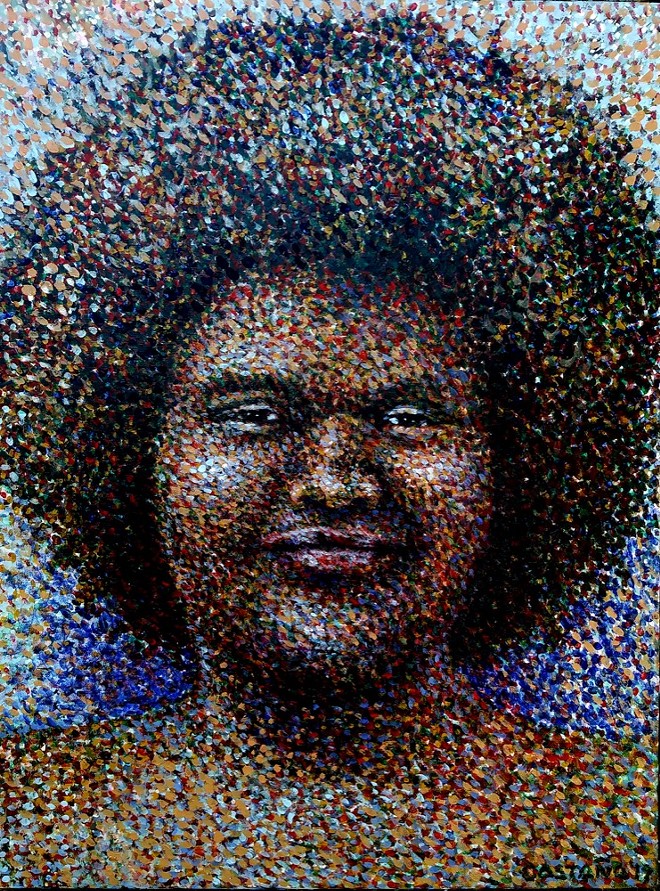 – This story appears in the Jan. 15, 2020, print issue of Orlando Weekly. with the headline "Trans-lucent." Stay on top of Central Florida news and views with our weekly Headlines newsletter.