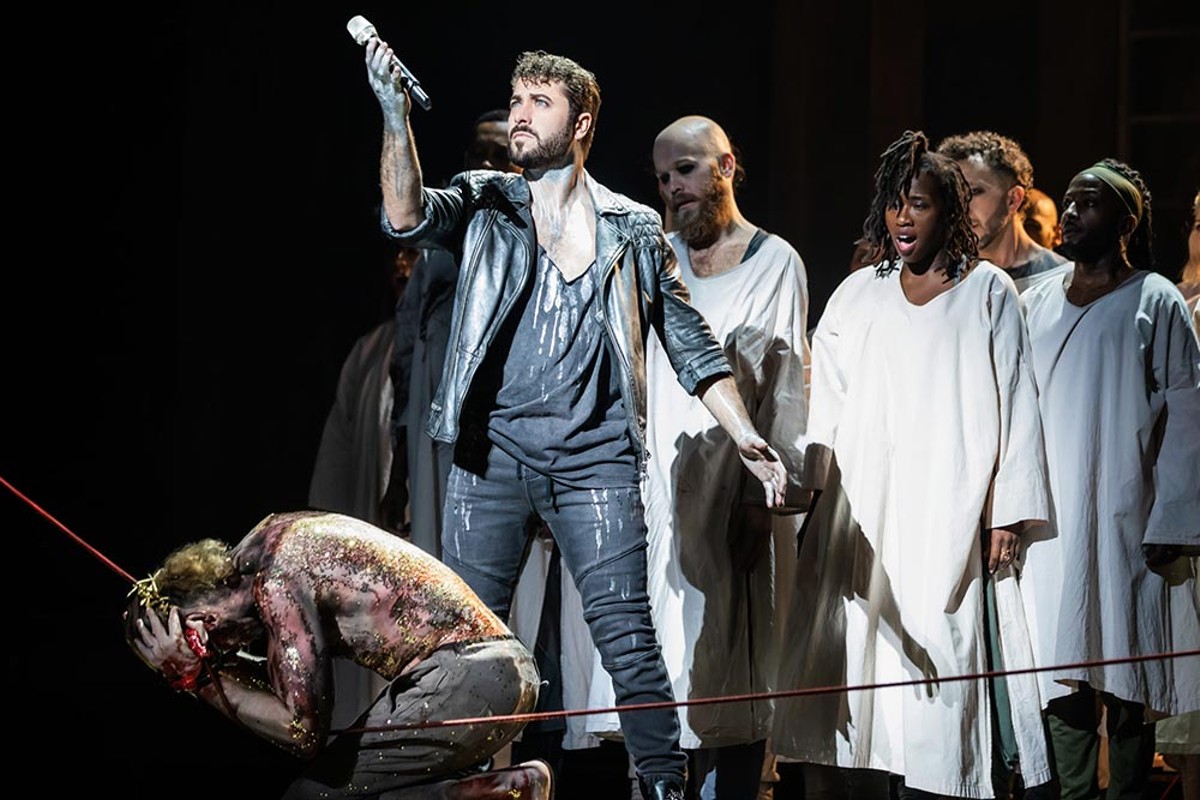 In 1971, the concept album–turned–theatrical sensation known as Jesus Christ Superstar arrived on Broadway to both acclaim and approbation. Half a century later, after countless stage and screen reinterpretations, Andrew Lloyd Webber's first (and arguably best) rock opera is finally returning to Orlando's Dr. Phillips Center this week. This pandemic-postponed 50th Anniversary national tour features University of Miami graduate Omar Lopez-Cepero in the pivotal role of Judas Iscariot. I Zoomed with Lopez-Cepero last week while the tour was visiting his former college home, and we spoke about his fascinating journey from Florida to Broadway and back.

OW: How did you first get into performing?

OLC: I'm so much of an advocate for arts in schools and public school arts education, because if it hadn't been for the teachers that I had in high school that recognized that I had talent and really pushed me ... I was one of those stereotypical stories that you see of a guy who was an athlete that finds out that he's a singer and an actor, and really falls in love with entertainment and arts. I really found my home and my place in theater and in the theater community.

It wasn't really until my senior year that my high school teachers basically challenged me to audition for schools and see if I got a scholarship. They said that they thought I would get a bigger [theater] scholarship than I would in sports, and they were right; I ended up getting a full ride to the University of Miami, which was an incredible honor.

What was it like being a "swing" (or substitute) in the original Broadway company of American Idiot?

The opportunity to work with Green Day and [director] Michael Mayer, [music supervisor] Tom Kitt, just the entire team across the board — I knew this was going to be a special gig, and I said "I have to do this." When I found out I had to cover nine people, my head almost exploded. But I think coming from an athletic background and a competitive background actually prepared me in a way to be able to tackle the rigors of a swing. A swing really has to be able to step in at a moment's notice, so it's almost like you're an athlete stepping up to a free throw line and having to hit the final shot.

I have to give a shoutout to our swings in our show currently, and all swings across the board right now, especially during pandemic times. Because the swings' job is a very, very difficult job and it's many times not rewarded or acknowledged enough. They're working really hard because there's so many people out all the time because of COVID, and so a lot of times you'll have to play multiple characters in the same night.

How do you approach singing Judas' notoriously challenging numbers?

Andrew Lloyd Webber can sometimes be polarizing, in terms of some people absolutely love him, and some people don't love his work. I think that after working on his material, I really got to understand the genius in the complexity of what he does. In a lot of ways, I say he's kind of a [sadist] to singers, because if you listen to Jesus Christ Superstar, Evita or Phantom, he really uses the entire vocal range of an actor.

I think inevitably we're influenced by what's come before us, just by osmosis [but] I think that there's a danger in trying to emulate what someone else does. What I think our creative team and music team really wanted to do was bring our own uniqueness and our individuality to it; bring a lot of ourselves to this, because I think that that's what makes it much more organic and much more appealing, and more truthful.

To be completely frank, the show is extremely difficult, so there's really only one way for me to sing it.

The team really wanted to start from the origin of where it all began, which is the [1970] "brown" album, the concept album. So that's the genesis for this piece: That is the language that we speak and how we want to transmit this emotional story through the music. You're going to hear a lot of the return to original arrangements from the original brown album. You have the band on stage; you're gonna get a concert feel in a lot of moments. I call this a hybrid theatrical piece because it has a concert element to it.

For non-theatergoers, it's a great introduction into theater, because it's a through-sung show. The music really rocks, the band is on stage, and the visuals of the show really feel like a rock concert in a lot of moments. And then you get pulled into that dramatic storytelling that really captivates the second half of the show.

How has COVID impacted you personally?

Ironically, I was introduced to COVID on day two of my rehearsals. I had not been sick at all and had been very careful, but inevitably I came in right when it was really hitting hard, end of December/January, and I was two [or] three days into rehearsal and got COVID. I was out for two weeks and then I went straight into the show, so it was one of the greatest challenges of my life, because the vocal demands of the show are obviously very difficult. It is [like if] someone who hadn't run a mile once in their life had to start running a marathon after being sick, and just keep running. So, the first couple of weeks finding my pacing, finding my health again, was one of the toughest things I've ever done. But I survived it and am stronger because of it.

We're so grateful that work is back, because we were not working for a long time. We're very grateful that audiences have come back, and the shows are coming back.