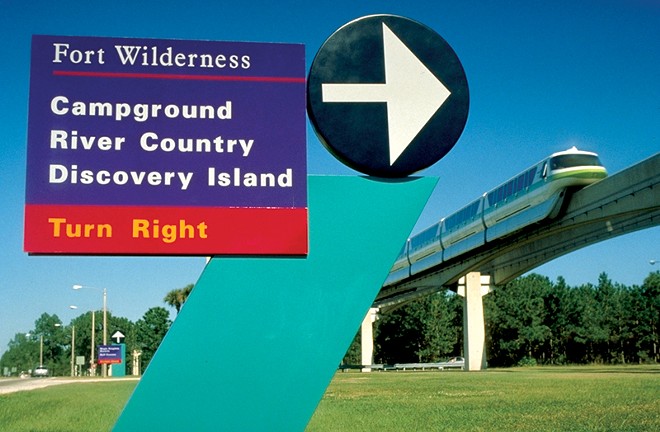 The 50th Anniversary at Walt Disney World was more than a large marketing effort, and the impacts of it will long outlast any commercials bringing awareness to the celebration. On top of the half a dozen major new attractions that opened around the anniversary, Disney has been busy with many smaller enhancements. Characters statues, both the golden ones and others, are popping up around the parks, and the resorts have each undergone their own improvements. But even before a guest checks in to a hotel or walks through the front gates of a theme park, they’ll see significant changes at the resort.

Around the same time as the grand opening of the Skyliner, Disney unveiled new bus liveries that swapped out the generic branding for large character wraps. At the Ticket and Transportation Center, the colorful signage was also replaced with a more muted modern aesthetic. The monorails also saw soft refurbishments with new interior color schemes more in keeping with the retro railway. With the updates to their mass transit system now mostly complete, Disney is shifting the focus to other aspects of their overall transit system. 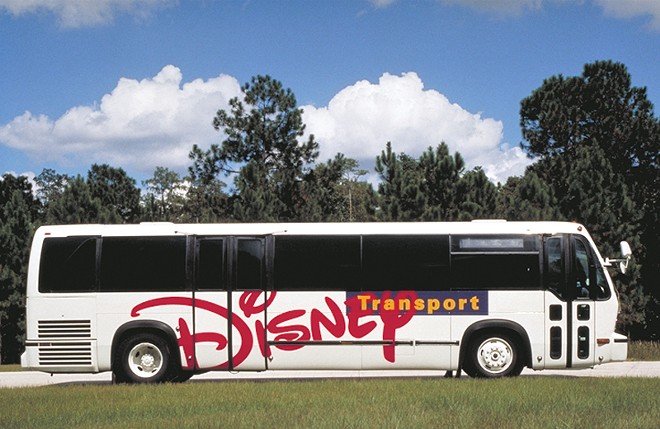 Image via Sussman/Prejza
The Sussman/Prejza designed liveries for Disney World buses
The final vestiges of a once iconic wayfinding system are now being replaced. The purple roadway signs used to direct vehicular traffic around the resort have begun being swapped out with new blue-based signage. Like the purple before it, the blue aesthetic can be seen on signage throughout the resort. New roadway signs with the blue scheme have been installed on Osceola Parkway and are slowly being rolled out across the resort. The roadway signs to be replaced are ones with mentions of the soon to open Star Wars: Galactic Starcruiser. They match the color scheme also seen on the updated welcome archways.

The signage was first introduced as part of the Disney Decade that then CEO Michael Eisner used to transform the resort, which at the time was still competing against the likes of Downtown Orlando and SeaWorld, into the juggernaut it is today. The expansion saw the company rid itself of any holdovers from the hopes of a live-work-play urban area and instead go all-in on the suburban style, far less walkable resort that it is today.

Growing up on Park Avenue in Manhattan, Eisner kept the appreciation for art instilled in him from an early age. That appreciation can be seen across the large-scale projects he undertook while at the helm of The Walt Disney Company. Marrying vacation-inspired whimsy with New York-level art, Eisner pushed some of the greatest designers of the late twentieth century with his prompts for Disney projects. That can be seen in Orlando with the Arata Isozaki designed Team Disney building, which features one of the world's largest sundials and looks like a giant wristwatch from the sky. Nearby are the Michael Graves-designed Swan and Dolphin resorts.

Graves being a favorite of Eisner, it comes as no surprise he tapped him to design the first hotels visible from inside a Disney World park since the introduction of Space Mountain more than a decade earlier. A year after the Graves designed Swan and Dolphin opened, the Robert A. M. Stern designed Yacht and Beach Club resorts opened, providing a walkable district of significant architecture linking EPCOT to the new MGM Studios park. 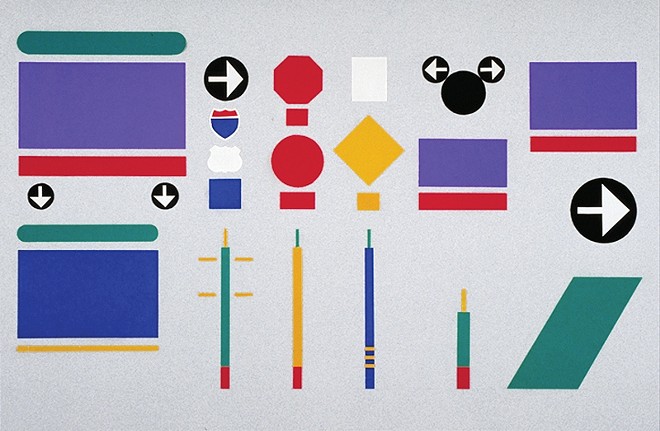 The project saw the design firm touching every element of transit across the resort, from the bus liveries to wayfinding signage, including the purple signage that is now slowly disappearing. Sussman’s New Wave-inspired signature look can be seen in the pops of bold color inspired by Mickey Mouse, with Mouse ears often peeking over the top of the signs. The project was the first attempt to bring a cohesive singular resort-focused branding to the growing web of roadways at Walt Disney World, which previously had signage more in line with what guests may find off property.

The same designs were also used at Disneyland Paris, then known as Euro Disney, where some aspects of it can still be seen.

Now, the once in-vogue signage is a holdover from a bygone era. That era may be one filled with many flops for The Disney Company, but just as the streamlined blue signage now replacing it is indicative of the generic design standards currently plaguing many new projects around the resort, Sussman’s purple signs point to a time when Disney was willing to take risks, even with something as minute as a road sign.