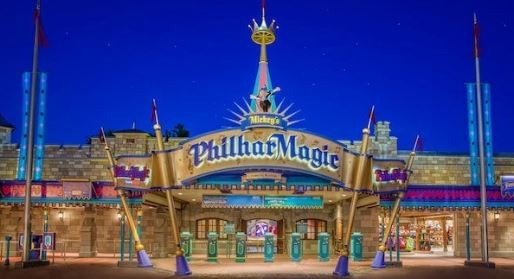 Now with the dated film becoming an ever more iconic attraction for Disney parks worldwide, there are new rumors of significant updates for it in the works.

The movie is a quick of Disney blockbusters with Donald Duck finding himself in scenes from Beauty and the Beast, The Little Mermaid, Peter Pan, Aladdin, The Lion King, and The Sorcerer's Apprentice. Each scene has one to two songs from that movie with numerous in-theater effects.

When the attraction opened, it wowed guests with crispy video footage on what was at the time the world’s largest screen specifically designed for 3D videos. Disney used some of the original artists from the films to help make the new movie, keeping the characters as authentic as possible. The video also includes one of the very first versions of a computer-animated Mickey Mouse. 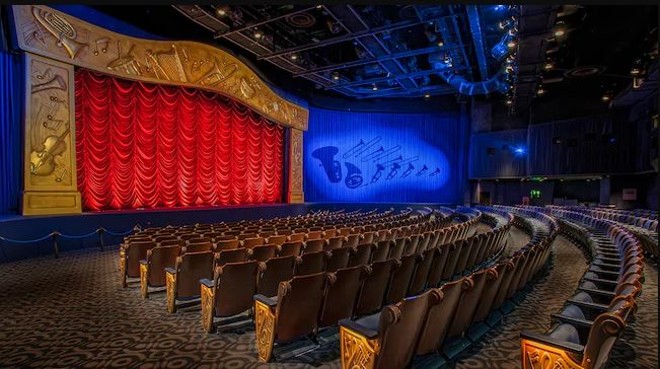 Image via Disney
Mickey's PhilharMagic
Smell cannons, water spray effects, smoke, and even an animatronic make this a classic 4D-style attraction that many guests visit on every trip. But now, close to two decades since the attraction began development, it’s starting to feel a bit dated. Plus, the film, while impressive when it first debuted, seems blurry by today’s more sophisticated guests.

Even if one can look beyond the blurry image and dated effects, the film doesn’t celebrate a single Disney movie made after 1994, including all of the recent blockbuster hits that Disney fans today expect to see in the parks.

When Disney announced they would be adding PhilharMagic to Disneyland Paris, there was some speculation that updates would be coming to the show. Instead, the French version debuted a few days ago with the only noticeable upgrade being the soundtrack, where Disney used the French versions of the songs. Some of the effects are also not in use since the film is being played in a pre-existing theater that received minimal updating before the attraction’s debut.

A full digital projection system will also be installed, and the latest in 4D technology will replace the dated effects currently found in the theater. The new film will likely be of similar length to the current one meaning some scenes from the current film will be shortened or cut out completely.

No specific timeline for the updates has been shared. Tokyo is likely the first to receive the rumored new film as part of that park’s big 2020 push ahead of the Tokyo Olympics that same year. Orlando’s updates should happen in time for WDW 50th Anniversary in 2021. A timeline for when the updated film will open in Hong Kong Disneyland and Disneyland Paris is much more unclear though both of those parks are going through a multi-year upgrade that will see major additions to their resorts, including a complete rebuild of the castle in the Hong Kong park; a first for a Disney park.

The daily schedule for the Orlando version has been posted for the next six months indicating any updates here aren’t likely until at least next fall.

Unlike a new attraction, the update shouldn’t take long. Though, the Orlando version will likely see an electrical upgrade, as well, which may cause the update to take a bit longer than the updates in the other three parks.