Is 3D dead for good, or is its widespread elimination just a pendulum swing? 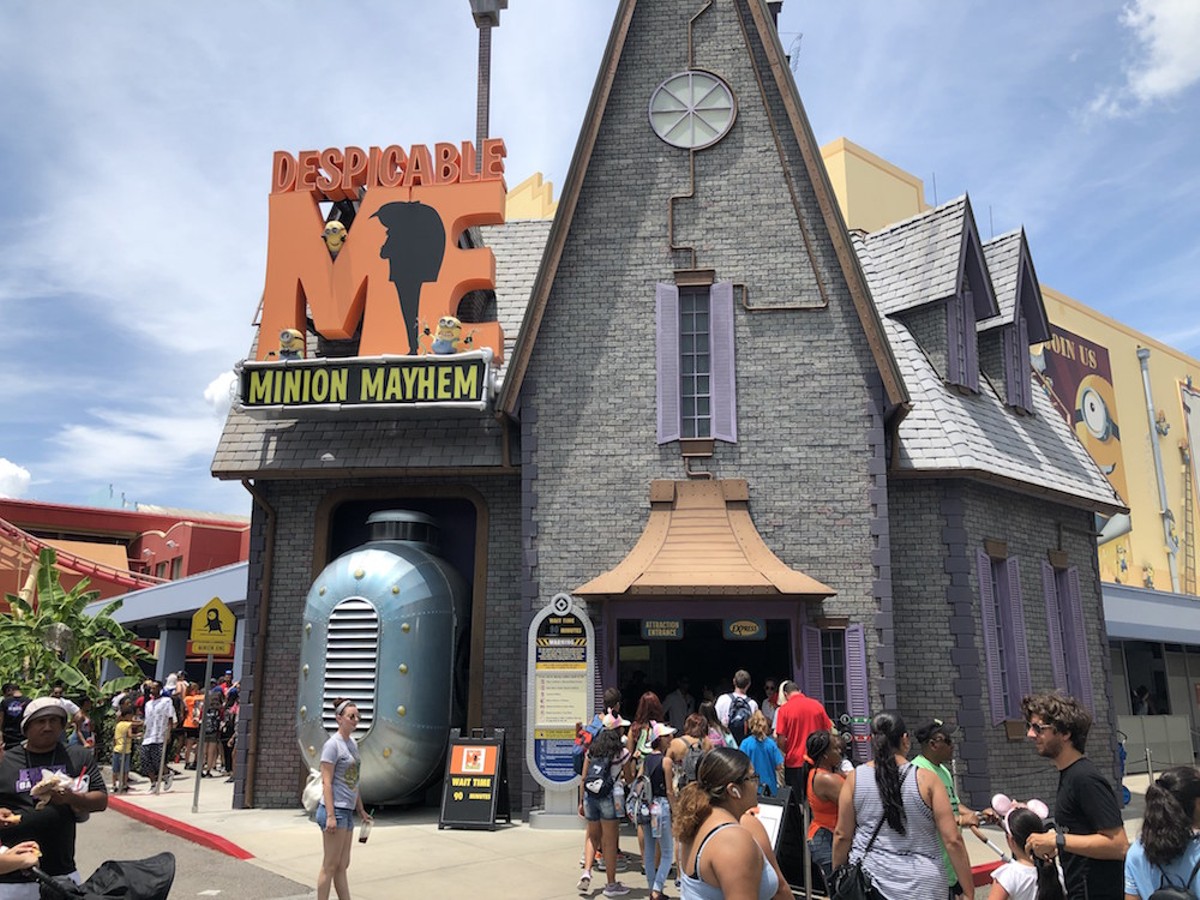 I'd originally intended to spend this edition of Live Active Cultures exploring Universal Orlando's new value-priced Endless Summer Surfside Inn and Suites, where I enjoyed a short working staycation last week. But while I was using the hotel's early park admission privileges for guests at Universal Studios Florida, I inadvertently stumbled across the unadvertised expiration of a once-unstoppable trend in themed entertainment. Its obituary might not have been noted in the newspapers, but fans of funky plastic glasses and eye-poking effects should hold July 18 in their memories, because – at least as far as Despicable Me's mischievous Minions are concerned – that's the day that 3D died.

It's a long-held truism that Disney designs attractions with physical sets and animatronic figures, while Universal builds simulators and projection-based rides. In fact, partisan fans of the competing resorts have been screaming at each other online about "screenz" for so long, they may have failed to notice that the old cliché has recently been turned upside down. Disney's latest E-Tickets, including Flight of Passage, Millennium Falcon: Smugglers Run and the upcoming Mickey & Minnie's Runaway Railway, all rely heavily on screens. Meanwhile, Islands of Adventure's new Hagrid's Magical Creatures Motorbike Adventure emphasizes practical effects, as will Universal Creative's upcoming Secret Life of Pets and Super Nintendo projects.

That inversion isn't accidental, and it didn't occur overnight. Disney pioneered 4D theme park attractions in the 1980s with shows like Captain EO and MuppetVision, but Universal raised the bar in the 1990s with Terminator 2: 3-D (once heralded as the best theme park show in town, but now closed and being replaced by a 3D-free stunt show) and The Amazing Adventures of Spider-Man, which is arguably still the best dark ride in Orlando. Screen-based attractions cemented Universal's reputation as the place to "Ride the Movies," but after the back-to-back additions of Jimmy Fallon and Reign of Kong, 3D fatigue reached a peak as guests grumbled about having to wear glasses for every ride.

Now, in the clearest sign yet of 3D's decline, Universal has unceremoniously yanked the third dimension from Despicable Me Minion Mayhem, removing the glasses along with the delightfully sadistic preshow safety video. When it debuted in 2012, Minion Mayhem was lauded for its then-new Infitec dichroic projection system, which produces brighter, sharper 3D images than older polarized filters. The same technology was later used in Transformers and Escape From Gringotts, and until last week the ride remained one of its best showcases seven years later.

This change wasn't entirely unexpected – Universal Studios Hollywood converted their version to 2D several weeks ago, and the installation in Japan was never 3D – but the resort's Twitter feed had previously denied it was being planned, and the switch seemed to catch some employees by surprise. It also comes after Universal imported Hollywood's Fast and Furious attraction without its 3D effects and received wretched reviews for the ridiculously out-of-scale Vin Diesel.

I can already hear some readers shouting "good riddance," with good reason: motion sickness, eye strain and other kinds of discomfort are often associated with 3D, particularly when executed poorly. And I admit being biased as a lifelong fan of the format, who invested in equipment to watch increasingly scarce 3D Blu-rays at home. But even if you believe that Universal has too many 3D attractions, simply removing 3D from a ride designed around it isn't the solution.

Unlike Star Tours, which disguises its screen as a windshield, or The Simpsons Ride, which uses a giant dome to fill your peripheral vision, Minion Mayhem relied on the immersion of stereoscopic depth to distract you from the fact that you're sitting in a room with a bunch of other people, staring at a movie. And without anything popping out of the screen, sight gags like the dangling banana don't make visual sense.

3D's sharp decline isn't confined to theme parks, as a look at the local movie theater listings or flat-screen advertisements will confirm, and its failure is largely attributable to its greatest success. James Cameron's Avatar (which was recently surpassed as the all-time adjusted box office champ by Avengers: Endgame) both resurrected the long-dormant fad and sparked a gold rush that ensured it would quickly flame out from inferior content. And with 4DX theaters like Pointe Orlando now affordably offering the kind of immersive experiences only theme parks once provided, visitors are less happy spending $120+ on admission to sit in a shaking seat and get spritzed by water.

Personally, I still feel 3D, when properly used, has its place in attraction design, especially when seamlessly integrated with sets and practical effects. It may be out of favor for now, but I'm expecting the pendulum to swing back someday, as soon as someone invents good glasses-free 3D and the craze kicks up all over again.