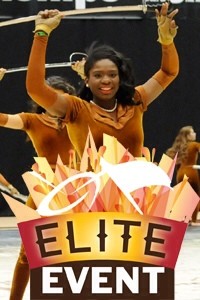 WGI Southeastern Color Guard Championships will be held this weekend in Orlando. (photo by WGI)

Shine up your sabers, unfurl your flags, and sling your (non-firing) rifles, because the Winter Guard International (WGI) Southeastern Color Guard Championships are being held this weekend in Orlando. Last week, I spoke extensively with Dean Broadbent, director of color guards for Flanagan High School in Pembrook Pines FL, about the past, present, and future of this exciting blend of sport and art.

I was in high school band, like a lot of people who get involved in color guard. I ended up going and doing senior drum corps in Connecticut; I performed with the Connecticut Hurricaines. I did that for a couple years until I started marching with the Cadets from Allentown, PA, until I aged out. Then I taught drum corps for a little over 10 years, and I went to school to become a band director and got a music degree. Flanagan here had recruited me, they had a position for band director/color guard director, and the guy who was the band director of Flanagan at the time was one of the horn instructors at the Cadets when I was marching, so he knew me. They flew me down for the interview, and that's how I landed here. I've been here since 2001.

When I aged out of drum corps, my first couple years I was just a tech, the person responsible to clean the kids' drill, how they move around the field and how they're spinning their equipment. From that, I was around a lot of people who were the creative people, and I watch how they'd work and plan, and come up with ideas and go out to the field or gym and try to make it happen, and how they'd have to adjust when it didn't really pan out the way they had it in their head. So I saw that whole process happening for quite a few years, and then I got asked to teach a couple little high school color guards in Connecticut, and I would go through that whole exploration process. I would have a grand plan, try it, and it wouldn't work... Over time, through trial and error I've learned to do some things, plus I've added people onto our staff who are really talented...I run the color guard, but I have 4 or 5 other people that come and help create the program and train the kids, and turn it into what it is.

A season is usually divided up between the fall marching band season, which is called fall guard, where we accompany the marching band to football games and do band competitions. Then around November/December everyone goes inside for the Winter Guard part of it. That's where we perform in gyms. We have big vinyl tarps that are either painted or printed to match our themes, and when we go inside we can do shows about anything. You can do spoken word, movie music, original music, whatever you can find and splice together. In fall you are limited to whatever the marching band can play.

When I was in band I was playing a trumpet, I was one of those kids marching around on the field. I would look at the color guard throwing stuff in the air, espeially the rifles, and I just wanted to to that. When I started marching drum corps I realized that I was getting better at the color guard part of it than I was at playing my instrument. When the job in Florida came up, and the school actually had color guard as a class, I got really exited to see what could be made of it by doing it every day, having kids in class every day just like you have them for band class. It just gave a really unique opportunity. You could really work on training kids, collaborate and make the show something special because you have all these additional hours and resources as opposed to just having it after school two days a week like a lot of places that have color guard.

The Winter Guard scene in Florida:

The winter guard scene is really huge here in Florida. They have a couple circuits, the near Orlando is FSCC. Down here we have the South Florida Winter Guard Association, and Florida is pretty well represented at the World Championships in April. I think in every class there's groups from Florida...Florida has been first or second in terms of the number of units sent to the World Championships for the last couple years.

Most places in the country its an after-school activity, just like if you joined the baseball team or student government. But in Florida they actually have it as part of the curriculum. The band director will have the color guard clinician come into the class every day and work with them. My position is a little unique because I have an education degree and a music degree and am employed by the school.

We have class every day. Our top group has a double class, so that's almost 2 hours a day there. We practice 2 nights a week; from 5 to 6 we'll be in the dance studio, and from 6 to 9 we'll be in the gym. If we don't have competition we'll have a long Saturday rehearsal, but most Saturdays are competitions where we practice in the morning and then go to the show in the evening...I have 4 color guard classes and 2 piano classes, so color guard is the majority of my day.

Everyone's creative process is very different. For us, it's evolved to the point where usually we start by talking to the kids about what kind of show they want to do, and who they want to be. From there, this year the show is called "The Summit" and it's about climbing K2, which is the 2nd tallest mountain in the world. We first came up with the idea to do a rock climbing show...and then from that we have a bank of music that we save and keep in our back pocket, so if we don't use [and idea] on year, we might hold onto it for a couple years.

We have 5 judges that each are responsible to evaluate 5 separate things. We have an equipment judge that sits down low on the bleachers, whose job is to judge how the kids are manipulating their equipment. We have a movement judge who evaluates how the kids are dancing. We have [one] for 'design analysis' and two for 'general effect' who sit at the top of the bleachers. They take those 5 numbers and combine those for our score. We have criteria for each of those judges that they have to follow, and the organization is constantly refining what that criteria is. But it's just like ice skating, you might find 5 people that see it one way, and you might find 5 others that see it another way. The ultimate goal is that everyone agrees, but it is very rare that 5 judges agree, so it's how the numbers average out that determines the winner.

Every judge makes a tape, so while the group is performing that judge is narrating what he's seeing and what he can give credit to or what he's detracting points for. We get a live tape, so we can hear our show music and know exactly where the judge is and what he's looking at...At certain shows we get to have a critque with the judges [where] you get time were we get to sit down with the judges and dialogue. So there's lots of good opportunities to figure these things out and try to understand the system.

The kids do train like an athlete. They have to stretch every day, they get trained in dance class, then they get trained technically on their equipment. Then they've got to learn choreography, and put it with how they're moving on the floor. They're training for a couple months, and some programs are training for a couple years. Our school has three guards, so for a lot of kids to get into the top guard it can be a 2 to 3 year commitment before you make it to the top groups. When the kids train that hard, they get the same bumps and bruises and sprains that you get from being on the track team. And the kids have to make sacrifices to do this; if you're spending every Saturday in the gym then you've got to make choices between a job and being a performer, or being in the color guard and going to Grad Bash or a lot of the things other kids get to do as part of their high school experience. But a lot of the kids love this, they love color guard and the chance on a Saturday night to be in front of an audience and perform. We spend every Saturday from the last weekend in January to the first weekend in April traveling.

Appeal of the activity to outsiders:

When people walk into our little word and see the excitement of the performers, and the energy and passion that the kids have, I think they really get sucked in. A Saturday night in a gym at a color guard competion, the energy is just electric. It's thousands of kids screaming for other kids being successful. Students [at the Orlando regional championship] are going to get a mini World Championship experience, they're going to get to be in an arena, and go against the best of Florida, knowing that in 2 weeks we're all going to be headed to the World Championships. It's a magical experience for the kids, and spectators feed off of that energy when they come to watch... The last time these groups were together was over a month ago, and a lot can happen. It's about who has trained the hardest, practiced the most, and focused...so you just never know.

Tickets are still available for this weekend's competition:

Full schedule available three weeks prior to event at wgi.org.

TICKETS: Ticket information for the Southeastern Color Guard Championships is available online at wgi.org or by calling (866) 589-7161. Pricing is as follows: