In honor of its 100th anniversary, Disney will show off its ‘crown jewels’ in a national touring exhibition 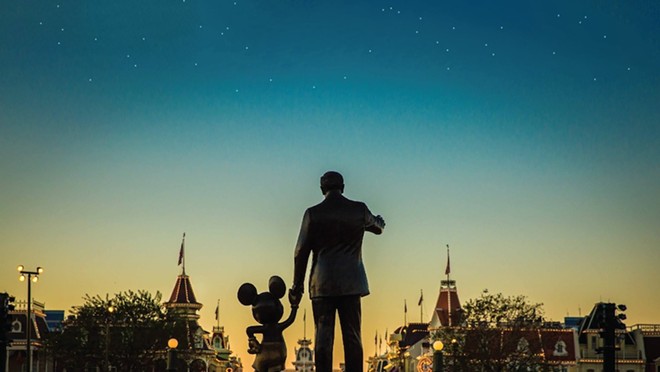 Photo via Disney/Facebook
Even while Walt Disney World’s upcoming 50th anniversary has been forced to scale back due to the pandemic, Disney is planning a massive company-wide celebration to come on its heels. Marking the centennial of the company’s founding, plans for the anniversary in 2023 are still mostly under wraps. That may soon change, as Disney recently revealed one project for the celebration and has given a timeline of when more will be announced.

An exhibit focused on the company’s first century will debut at the Franklin Institute in Philadelphia in February 2023. A second touring version of the exhibition will premiere outside the U.S. a month later. The exhibit will showcase “Disney’s crown jewels — art, memorabilia, costumes, props, and one-of-a-kind treasures,” according to historian and co-curator Paula Sigman Lowery.

The 15,000-square-foot exhibit will focus on all facets of the Disney company, featuring immersive story- and character-focused environments.

“As we approach the 100th Anniversary of The Walt Disney Company, we at the Walt Disney Archives are incredibly excited about traveling a new and unique exhibit marking a century of unparalleled innovation and storytelling with the world,” said Rebecca Cline, director of the Walt Disney Archives. “This groundbreaking exhibition will celebrate the wonder of Disney, from 1923 to the present and into the future.”

Developed by S.C. Exhibitions and Studio T.K., who also collaborated on the Marvel: Universe of Super Heroes exhibit, the yet-to-be-named "100 years of Disney" exhibit is the latest in a long line of Disney-sponsored art exhibits. Pixar, Marvel, the Chronicles of Narnia and the Disney Archives have all seen previous touring exhibition success.

Beyond the Philadelphia exhibition, little is known regarding Disney’s plans for the 2023 anniversary. Still, it’s expected that significant investments into the parks and resorts could be revealed before or during the anniversary. This year’s D23 Expo has been postponed until late summer 2022. In announcing the change in dates, Disney confirmed that at the expo, they would give “a first look at the incredible plans for the 100th anniversary of The Walt Disney Company.”

Nearly a billion dollars in Parks and Resort projects have been slowed or canceled due to the ongoing pandemic, but at least some of those projects should be ready to be dusted off by next year, allowing Disney to include them in the anniversary announcements. In Orlando, long-rumored plans for ride updates and new parade offerings haven’t happened, leading many to suspect those projects may now be delayed until at least 2023.