Immersive, open-air events like ‘Down the Rabbit Hole’ might be the future of the arts in Orlando

Into the great wide open

Throughout the pandemic year that was 2020, Orlando arts movers Creative City Project lived up to their moniker more than perhaps ever before. Already well-versed in staging happenings and performances in public spaces and unconventional locales — as writ large with their annual Immerse takeovers of downtown Orlando — Creative City staged three events, each successively bigger than the last, that all pointed the way forward for live art in this ever-lengthening uncertain moment.

The Re:Charge collaboration with Timucua Arts, the Bright Young Things theatrical walking tour through downtown Orlando, and finally the holiday phantasmagoria Dazzling Nights that transformed Leu Gardens were all breaths of fresh air — creatively adventurous but with audience and performer safety firmly centered.

Now, following closely on the heels of Dazzling Nights, comes Down the Rabbit Hole, which sees Mead Botanical Garden transformed into an immersive and thoroughly modern reimagining of Alice in Wonderland as a madcap walking tour where attendees encounter the iconic characters scattered throughout the foliage. Spending a freewheeling and fantastical afternoon or evening outdoors in the bucolic environs of Mead Garden surrounded by eccentric performers and flora and fauna in full bloom sounds like a fine, fine (and not anxiety-inducing) way to spend a spring day in Florida to us.

The show, dreamed up by Creative City head Cole NeSmith and Modern Theatricals' Donald Spencer, opened in early February and tickets for the entire run sold out within a couple of days. Thankfully for those of us who missed out, Down the Rabbit Hole has been extended through March 25. Orlando Weekly spoke with NeSmith on the phone the morning he got the news about the extension, and as you could imagine, spirits were high. 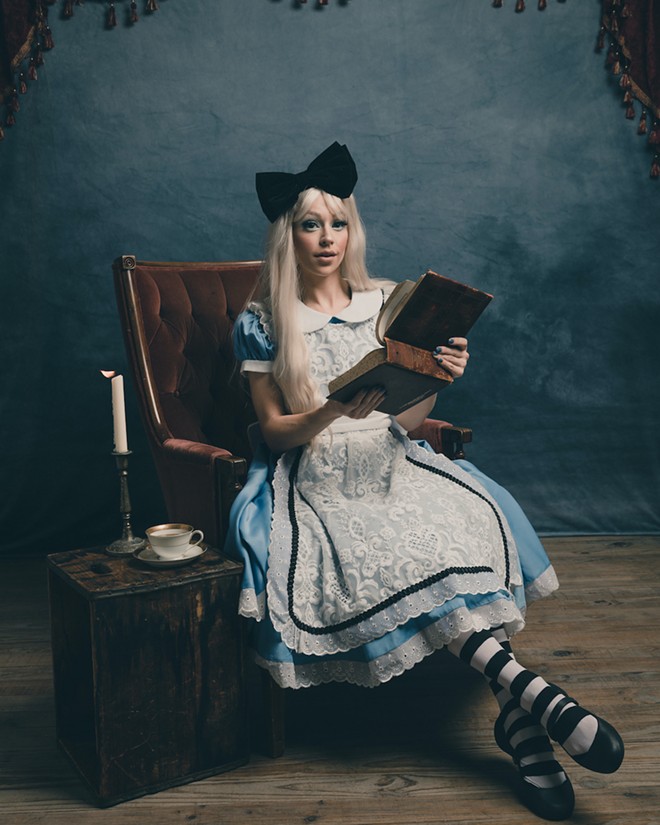 Could you describe the Down the Rabbit Hole experience?

Audience groups of 15 travel through Mead Garden as Alice leads them along the path. They'll encounter about a dozen scenes with different characters, and in our casting we tried to do an interesting, eclectic mix of artistic styles — so the White Rabbit is a stilt-walker, and the Cheshire Cat is a Lyra performer, Tweedledee and Tweedledum are a comedy duo, and there's a rose character who performs a song live. Our Mad Hatter's a tap dancer. So we've tried to put together a lot of eclectic forms of art along the way.

How did it come together so quickly after Dazzling Nights?

We started planning for this in August of last year, knowing that we weren't going to be able to do Immerse in October. We asked ourselves what kind of content could we start producing — and we had already been working on Bright Young Things. We wanted to take that concept and expand upon it and make something that was more conducive for families, but would still be really interesting for adults.

I had met Donald Spencer, who is the director of this show and wrote the script and did the casting, last year. He has a company called Modern Theatricals and they've done some original shows at the Dr. Phillips Center in the Pugh Theater. When I saw photos of his work I was really impressed with the costumes. He definitely brought that A-game to the costumes for Down the Rabbit Hole. I knew it'd be a cool opportunity to partner together because he's such a great master at the visuals of the show and I knew that'd be important for Down the Rabbit Hole. 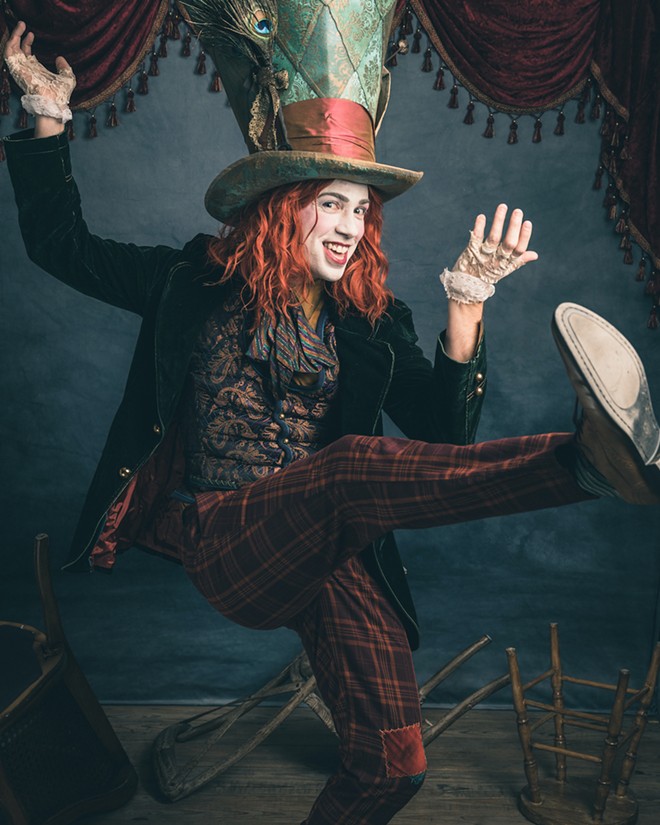 You've switched locations from Leu Gardens to Mead Garden — what was it that attracted you to Mead?

Leu Gardens is great for something like Dazzling Nights because ... we ended up having about 37,000 guests go through Dazzling Nights and most of that is paved. There's walking paths and things like that that are all really conducive for getting that many people through a thing. Mead Garden is quite different from Leu Gardens in that it's a little bit more rustic. It has more winding paths and narrow walkways and more trees and it really does feel like a forest. And that's something that we wanted for this show.

What knowledge have you taken from doing Dazzling Nights and Bright Young Things, and then put toward this?

One of the things I really love about doing this event at Mead Garden that's different from Bright Young Things is that Mead is a little bit more of an exclusive environment. Doing Bright Young Things in the middle of downtown Orlando on a Saturday night, even in October, there were just thousands of people and tons of loud music. Motorcycles every 45 seconds. And so there were just a lot of complications with that.

Though that points to the bigger idea of programming anything outside, which is that there are always unexpected things that happen, and rather than fighting those things, we're embracing the reality that unexpected things are going to happen, and we're not going to fight, but embrace them, and just continue to move through those moments. It's just continuing to learn about the challenges of producing something in an uncontrollable environment and how to work with the environment as opposed to against it.

Have you been inspired by other locals doing other kinds of outdoor events, immersive theater, music?

I think it's been really wonderful to see people doing that. Crystal Edwards, who is our programming director for Immerse, is part of a dance company that did a pretty cool drive-around-town dance performance in the fall. And then it was great to see friends do their outdoor Christmas Carol at Loch Haven Park. 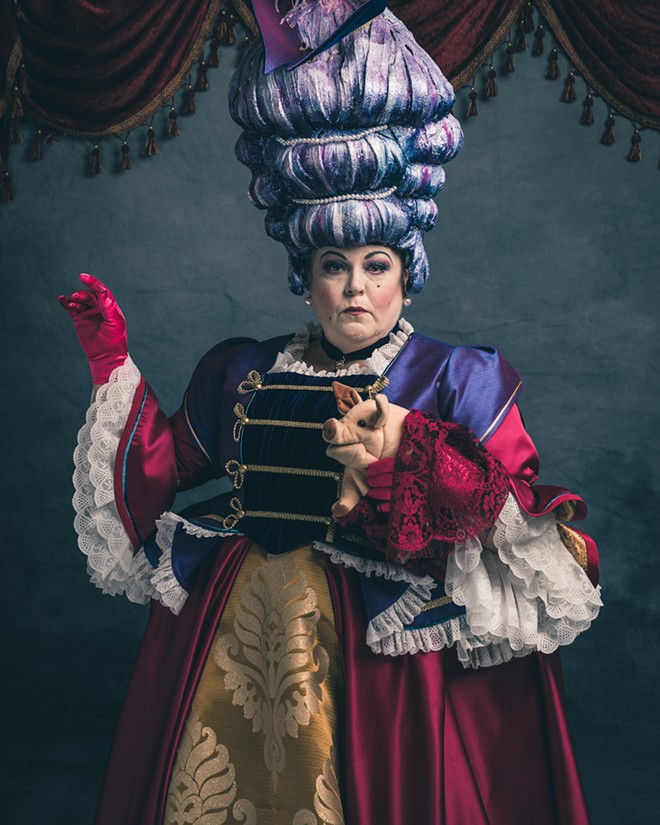 Photo by Mike Dunn
The Duchess

Even Orlando Philharmonic [is] doing concerts outside. This is a very traditional organization, doing something outside of their normal and traditional performance venue. ... It's just cool to see how our arts organizations are shifting what they do to continue to provide interesting and important arts for our community, and in a lot of ways that's kind of exposing us all to brand-new audiences.

What sort of health and safety measures are in place?

All of the stuff that we've produced in this past year has been — well, October through April — all outdoor stuff. That's been one of the things that has been really helpful for us. And then we've continually monitored how our audiences are moving through each of those experiences. We started with Dazzling Nights at a lower number than we ended because we realized we could add a few staff members and keep people moving in the right direction.

We're constantly looking at how we're keeping our audiences distanced and safe from one another from a capacity standpoint. All of our timed ticket entries for these events have been really helpful. And all of our guests wear masks while they're doing the experience.

Do your performers or team members ever get any hostility in enforcing or reminding people about these measures?

You know, one of the things that I have noticed is that people are just so ready to experience something interesting and meaningful that we haven't really had any issues of needing to enforce, because people are respectful, and I'm grateful for that. The people who are coming to our events are respectful of the things that we've asked them to do. And we make that abundantly clear before they even arrive.

So before they buy a ticket, they see that there's a mask requirement. When they get their confirmation emails and follow-up emails that stuff is reinforced. By the time they get there, it's not a surprise to anyone.

Do you think this will be a long-term trend where audiences are more receptive to seeing art and music and theater in unconventional spaces?

I think audiences already have an appetite for that, regardless of whether or not they know it.

One of the ways that we've connected with so many people is because we're producing content and producing content in ways that are unique and I think audiences are really drawn to that. I, as an audience member, am drawn to that. I love going to things that are in unique spaces or going to performances that are not staged in a traditional way. So when it comes to producing, that's something that I think a lot about and get excited about in the creative process.

Has presenting Bright Young Things, Dazzling Nights and Down the Rabbit Hole perhaps made you more of an outdoors person?

That's an interesting question because for me, I think this has been a learning process of releasing my anxiety over producing content outside, because I love being able to control the environment as much as possible. I've had to learn to release that sense of control, so I think that's one of the things that I've kind of grown into over this process.

It's been amazing to go into spaces like Leu Gardens and Mead Garden, that are beautiful in and of themselves, and then illuminate those spaces with light in a way that brings new life to those spaces and helps connect people to them, in almost wondrous ways. I think that's one of the things that I've really loved about the last year of programming.