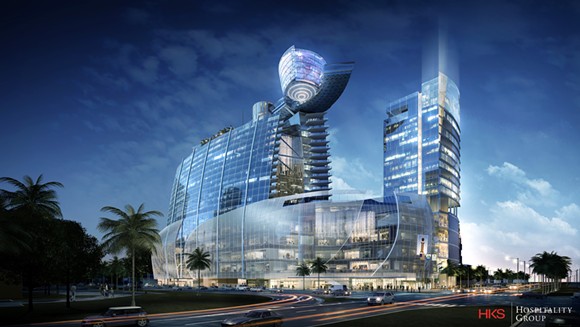 Photo via iSquare
International Drive’s so-called "megamall" got its second hearing before the City of Orlando City Council last week. The hearing is just the latest step in the process to get the iSquare project approved.

A larger version of the iSquare hotel-mall project was initially approved by the city in 2014. Since then, the project has changed slightly, decreasing in size (749 rooms to the now 539) but it remains just as bold in its vision to reimagine north International Drive as a luxury destination.

The second hearing is important as it’s usually the final step before the full-on city approval of the project. Typically, it’s during or before this step that an opposition is heard and any questions the council may have will be asked. iSquare has received little opposition despite being a major development. Early on some concerns about traffic were expressed, but those have since been met according to city documents.

iSquare will be located on the corner of Kirkman and International Drive where the famed Bill Wong’s buffet was located. Gone will be the buffets and t-shirt shops, replaced by a 4-story 434,831 sq. ft. mall. The retail area will also feature a luxury ice skating rink which the owners have said will likely include colored ice.

Photo via iSquare
Along with the indoor shopping complex, iSquare will also feature a two hotels; one with a helicopter landing pad. A rotating restaurant tops off the complex. The entire complex will feature luxury amenities and finishes. The formerly approved PD featured one large tower while the updated plans now have a larger base with two smaller towers as part of the development. Solis and Capella will be the flags for the two hotels within the complex.

With the approvals more or less out of the way construction can begin soon. The developers have stated that they plan to break ground in 2017.