How to Follow Cannes Without Getting Sand in Your Crack

Okay, deep breath now. The movie news marathon that is 65th edition of the Festival de Cannes begins on Wednesday night with a screening of Wes Anderson's highly anticipated Moonrise Kingdom (which opens here at the Enzian on 6/22). On Thursday morning it's basically non-stop insanity until the following Sunday when the final films play and awards are announced.

The question on everybody's mind, of course, is what will this year's standout film be? Last year gave us an unusual crop of very good films, with three standouts: the eventual Oscar winner, The Artist, Melancholia and The Tree of Life.

Looking over this year's crop, David Cronenberg's Cosmopolis, Wes Anderson's Moonrise Kingdom and perhaps Jacques Audiard's Rust and Bone seem to be the front runners for breakout hit, though none of them, I don't think, will have the euphoric crowd pleasing effect that Uggie and The Artist did, and both Cosmopolis and Moonrise Kingdom already come with built-in fanbases. 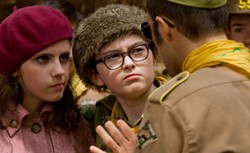 Nanni Moretti in "We Have a Pope"

Personally, in addition to the ones I already mentioned, the films I'm most looking forward to are Im Sang-soo's The Taste of Money, Hong Sang-soo's In Another Country, Michael Haneke's Love and Abbas Kiarostami's Like Someone in Love.

Then there was the controversy. Will anyone affiliate themselves with the Nazi party this year? Likely not. This year's controversy seems to be the fact that there are no female directors represented in the competition for the Palme d'Or, where there were four last year.

Seeing as how there were four last year, I tend to agree with Cannes director Thierry Fremaux when he says it wasn't intentional and that they weren't going to add a film by a female director just to have one. It's an unfortunate symptom of a larger, systemic problem, for which Cannes, the biggest and most prestigious festival in the world, is a natural lighting rod for.

More important than the competition, for us who can't afford to go to Cannes, is the marketplace. It's one of the biggest film distribution swap meets in the world and is already going on with a few films, like the Madam Bovary adaptation with Mia Wasikowska and Ezra Miller, having sold their distribution rights. The headline films that are looking for a buyer to distribute them around the world start with the biggies, with directors like Sofia Coppola, Lee Daniels, Denis Villeneuve, Peter Berg and Spike Lee at the top of the list.

This is the most important part of Cannes for regular moviegoers. The Palme d'Or is nice, but its a very strange, hyper-hyper subjective award that most people usually don't agree with. Go ahead and look at the winners. It's a kind of head-scratching list for a lot of years.

The competition for the Palme d'Or (and other prizes) is secondary, for me, but more important to most people.

The Palme d'Or Jury is headed this year by former Palme d'Or and Best Director winner, Italian director Nanni Moretti, who was at Cannes last year with his film We Have a Pope (which just recently received a limited release in the States).

The best places are generally the places you'd think of: Deadline, The Hollywood Reporter, The New York Times, Variety, The LA Times, IndieWire, The Guardian. I'm sure HuffPo will aggregate everything.

TOMORROW: Trailers for all in competition films.