Has Disney finally realized their monorails need a major update?

With 12 trains to replace and numerous other upgrades to the system, this will be one of the largest investments in transportation at Walt Disney World since the last monorail update in 1989, which saw the introduction of the Mark VI trains that are still in use.

For years, there's been speculation about when Disney might update the Walt Disney World monorail fleet. Last numerous sources confirmed talks had begun with Siemens looking to sponsor a new fleet that would be branded by them. However, sponsorship talks failed and Siemens chose not to renew its other sponsorships at Walt Disney World either, which at the time included Illuminations and Spaceship Earth. Both are rumored to be getting their own upgrades ahead of the 50th Anniversary in 2021.

With the Siemens sponsorship not happening, Disney began looking for other ways to pay for the new fleet, which some have estimated will cost more than $250 million. With the Magic Kingdom’s Main Street Theater now looking like it's postponed, some are speculating that the finances set aside for the theater are being shifted to help pay for the new monorail fleet.

Just two and half weeks after the Monorail Red incident went viral, rumors began surfacing of Disney meeting with manufacturers about ordering a new fleet. Then last week WDW New Today reported Disney had contracted Bombardier, the same manufacturer as the current Mark VI trains, to replace the current fleet. Since then the rumor mill has been a mixed bag, with some insiders confirming that Bombardier has in fact been retained, while others, including the highly respected insider on the WDWMagic forums known as Marni1971, still reporting that Disney has yet to order the new trains.

Those who believe the trains are coming, including WDW News Today, point to Bombardier’s new monorail model, the INNOVIA 300, as a likely contender for what will replace the current monorails. The Mark VI monorails are viewed as the predecessor of the INNOVIA 300. In Vegas, a monorail system was constructed and initially ran monorail trains formerly used at Walt Disney World. That system now runs an INNOVIA 200 model train, which still uses certain parts from the original trains purchased by Disney while updating the look and cabin layout.

The INNOVIA 300 are currently in use in Saudi Arabia, Brazil, Thailand and China, with most of them being entirely automated. After an accident in 2009 killed a monorail pilot, Disney has been attempting to automate their system. Disney's patchwork of updates in the nearly decade since has yet to achieve the desired result of a fully automated system, thanks in part to the dated system that the Disney World system still relies on at its core.

Also, similar to the Las Vegas monorails, the new Disney World ones will likely include significant updates to the cabin design. These may include inter-car walkthroughs, known as open gangways, allowing passengers to access more than one cabin while the monorail is in motion, similar to the articulated buses that both Disney and Lynx now use on their more popular routes. This open gangway design dramatically improves evacuation procedures since each individual car doesn’t need to be accessed. The updated cabin design will also mean higher capacity, with some INNOVIA 300 systems achieving a whopping 40,000 passengers per hour capacity.

The fully automated system also allows for more trains to be operational at a single time, though Disney will likely still include a pilot on each train for safety reasons, at least in the beginning. 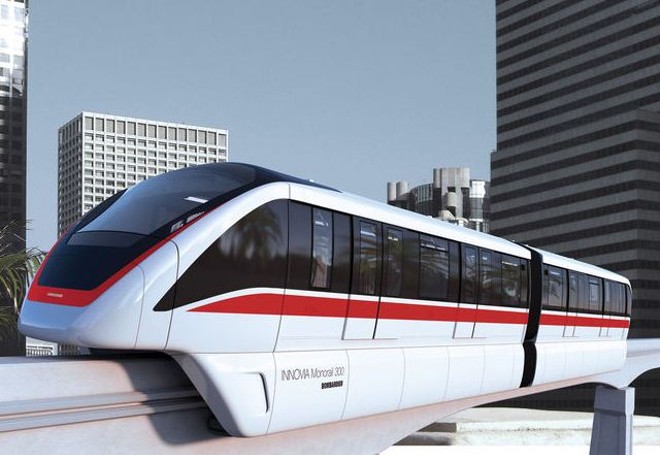 Image via Bombardier
The INNOVIA 300 monorail
Some fans have expressed concern over Disney possibly changing the look of the now iconic monorails but, as others have pointed out, it's possible that Disney could easily replace the more flattened cone on the ends of the current INNOVIA 300 trains with one that is closer to the elongated cones of the WDW monorails. The INNOVIA 300 trains already feature a large color strip down the sides that is nearly identical to the ones found on the WDW trains.

Using the pre-existing train design also means a major cutdown in production time for the system, causing some to speculate that Disney World will see the first of the new trains operational by the 50th Anniversary, just three years away.

Locally, Bombardier operates SunRail thanks to an agreement of this very nature. They also oversee maintenance and operations for many systems around the world, including Atlanta’s MARC, JFK’s AirTran, and Ontario’s GO Transit. They manage all maintenance of Salt Lake City’s FrontRunner system as well, with daily operations there being overseen by another group.

Disney World has a major media event planned for early this summer to showcase Toy Story Land, and another planned for next year’s Star Wars Land opening. Also, next year will also see another D23 event in Anaheim. It’s likely that Disney will use one of these events to announce this rumored overhaul what is one of the most famous mass transit systems in the world.