Fundies want a bigger “Behind”

Send a News Tip
I’m always surprised when I see somebody reading one of the Left Behind books for pleasure. It’s not totally incongruous in a place like Orlando, which has its share of the born again. But I’ve also seen it in New York, where, if the likes of Glenn Beck are to be believed, pastor Tim LaHaye’s gospel of hierarchical piety should find no purchase. 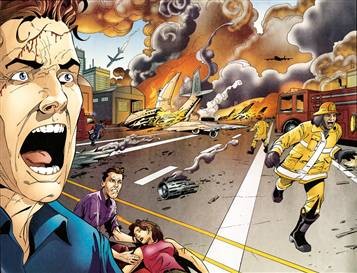 These are, to engage in some understatement, popular books. Which explains why their adherents aren’t willing for the cheeseball Kirk Cameron flicks of the last decade to remain their sole representation on the big screen. Per The Hollywood Reporter, plans are afoot for a new adaptation that would be bigger and better. Apparently, fans of the series view the previous attempts -- only one of which received a legitimate theatrical release -- the way Marvelites view the Matt Salinger Captain America or the Dolph Lundgren Punisher: better than nothing when they were all there was to be had, but crying for a do-over nonetheless.

The Left Behind reboot, which currently exists only as a script, is said to hew to more of a “disaster movie” format than its predecessors -- which raises all kinds of impish Michael Bay associations. (Transformer, meet Converter.) But nobody appears to be intending to play in that size sandbox, given that the budget of the new version is still only set at $15 million. (Its writers are also veterans of the previous series, which doesn’t exactly scream “complete and total redemption”: It’s like hiring Dan Aykroyd to shepherd a more faithful take on Exit to Eden.)

The goal, as THR assesses it, is to ape the success of recent overperforming Christian dramas like Fireproof and Courageous. Making genuine inroads into the popcorn-flick mainstream would be more difficult. On the one hand, the books do have that demonstrated crossover appeal; on the other hand, the moviegoing audience is larger and broader than that percentage of the population that still reads, and their tastes would be harder for LaHaye et al to satisfy on a whole host of levels.

For one thing, despite all their success as airport reads, the novels are terminally square, their view of “decadent” modern society fixed in the white America of 50 years ago. That feeds into their other critical failing: They’re just atrociously plotted and written, sometimes to the point of unintentional hilarity. In Glorious Appearing: The End of Days, Christ returns to Earth and instructs the faithful to line up on “my right, your left” -- as if he’s directing the traffic flow to the potato salad at a church supper. Even an audience conditioned to accept Twilight as high romantic tragedy would have trouble swallowing that buffet.

Besides, genuine, across-the-board success would rob the Rapturous set of the perpetual resentment and perceived marginalization that are their driving attitudes. The most telling talkback comment on the THR piece asserts that “Christianity is the ONLY thing Hollywood hates more than they love making money.” (Decoded version: “The place is run by Hebes.”)  Ironically, the works of avowed atheist Ayn Rand are the closest analogy I can come up with here, given that some of her acolytes still attribute the utter failure of this year’s Atlas Shrugged -- Part I to some sort of nanny-state conspiracy and not the wide critical consensus that the movie sucked out loud on an aesthetic level.

So yeah, a tidy return on a $15 million investment sounds about right -- unless something happens as the movie is reaching theaters to push evangelical concerns to the forefront of popular discussion. Something like, say, an Obama/Romney race, which would shine a spotlight on the religious Right’s dismay over the lack of a “real” Christian candidate to vote for. Should those stars align, the line to profit at the box office forms on my right.