Fundamentals are sound, but Shakes’ ‘Les Miz’ is a mixed bag 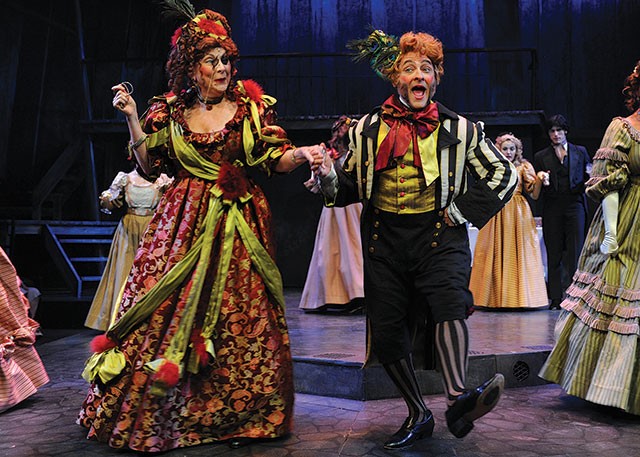 To top February’s monumental mounting of The Life and Adventures of Nicholas Nickleby, Orlando Shakespeare Theater turned to Les Misérables, the “world’s most popular” mega-musical. And how better to publicize this ode to the underclass than a flash mob in Orlando’s most expensive mall? Well, I’ve got that beat: I flew to Montreal, spent the weekend inflicting my French on innocent Quebecois, then left for home at 4:30 a.m. so I could arrive at Shakes early enough not to run afoul of their strict new late seating policy.

My Canadian vacation didn’t go viral or get broadcast on the Today Show. But it should signal how intently I anticipated Shakes’ staging of Les Miz, which has been an obsession of mine since the first French concept album. I’ve seen the show more times than I have fingers, from frequent pilgrimages to NYC’s Broadway and Imperial theaters in the ’80s and ’90s to the spectacular anniversary revamp, currently playing in the Imperial Theatre again. I even bought my first CD player expressly to play the complete symphonic recording three-disc set, which I’m listening to for the 10,000th time while writing this column.

In light of that history, and the fact that I’ve reviewed versions of Les Miz twice in the past two years, I’m not going to waste words recapping the sung-through story, which (as always) chronicles the flight of parole-breaking convict Jean Valjean (Michael Hunsaker) from the Ahab-esque Inspector Javert (Davis Gaines), set against the backdrop of the Parisian student revolt of 1832. Nor will I defend the merits of Claude-Michel Schönberg and Alain Boublil’s popera score, or Herbert Kretzmer’s recitative-ridden lyrics. Suffice it to say, the melodies and morals have moved millions – me included – to tears for more than a quarter-century, and will likely continue to do so after everyone involved in the original production – or even this current one – are gone.

In other words, the fundamentals of Les Miz are so sound that even a mediocre version would thrill many theatergoers. The questions when evaluating a new staging, then, are how does it look, how does it sound and how does it feel? In the Shakes’ case, the answer to each is uncomfortably complicated. Non-fans, be forewarned; we’re about to get into the weeds of Miz minutiae. For the TL;DR crowd, I’ll cut to the chase: This is the first time in my life (including the Crowe-corrupted movie) that I came away from Les Miz with completely dry eyes.

The Orlando Shakes show looks great at first glance, with a multilevel set by Kat Conley that repurposes Nickleby’s turntable; appropriately grungy costumes by Denise R. Warner; and Bert Scott’s atmospheric, fog-accented lighting. Then you begin to be distracted by the failure to use said turntable as much more than a Lazy Susan for furniture, by the wonky wigs on many of the men, and by the way the pivotal barricade looks barely bigger than my junk pile on large trash day.

Sound is an equally mixed bag. On the plus side, engineer Britt Sandusky makes the cast’s microphones sound better than I could have hoped, and I hardly missed a syllable (something I can’t say about many of Les Miz’s visits to Bob Carr). Musical director Ken Clifton’s 10-member live pit, on the other hand, leans heavily on strident synthesizers and lacks low end, with no guitars and barely any bass. The epic opening chords sounded so tinny I thought they were being performed on Jimmy Fallon’s classroom instruments.

It’s in the feeling department that Shakes’ show fully derails. DJ Salisbury directs the show as manic melodrama, coaching his cast to mug mercilessly and milk every moment to unintentionally absurd effect. Death scenes are especially egregious, with seemingly every exit’s staging mind-blowingly botched – from Eponine walking halfway across the stage after saying, “I don’t think I can stand anymore” to Valjean comically convulsing before his dying words. I praised the 25th anniversary tour for completely reinventing the blocking, but Salisbury’s innovations repeatedly undermine key emotional moments with antic clutter, as if the cast can’t be trusted to stand still and sing a song for 10 seconds lest the audience fall asleep.

It doesn’t aid matters that this production runs about 20 minutes shorter than the original, through a combination of accelerated tempos (especially in Act One) and internal editing. Many of the cuts are copied from the latest revival but seem more damaging here, with Thénardier (James Beaman) and Gavroche (Luke Timmel and Jackson Chase, alternating) losing crucial character moments. Especially unforgivable is the excision of Fauchelevent’s rescue, which muddles a major plot point.

I lay none of the blame on the cast, who make the best of it with performances ranging from solid to stellar. As Valjean, Michael Hunsaker starts as the lovechild of Peter “Star-Lord” Quill and the Geico caveman, inserting wild yawps and cackles between vibratos, but he settles down to deliver “Bring Him Home” with a head voice that easily outdoes Hugh Jackman’s. Broadway star Davis Gaines’ Javert spits scenery sideways past his Vegas-era Elvis sideburns with deliciously dulcet deviousness. The duo is dynamite in their few scenes together; their duel duet was first-rate, despite klutzy fight choreography. Lianne Marie Dobbs bleats Fantine’s “I Dreamed a Dream” in full Susan Boyle mode, with none of Anne Hathaway’s Oscar-winning vulnerability, but Eponine (Caitlyn Caughell) and Marius (Tim Quartier) share charmingly contemporary chemistry; shame he ends up with bland Cosette (excellent understudy Sarah Caroline Billings at my viewing, embiggening an underwritten part).

Finally, I wasn’t privy to Shakes’ auditions, but it’s odd that Anne Hering (delightfully disgusting as Madame Thénardier) is the only Shakes regular in a major role, with a plurality of the cast imported from outside Orlando. I can name a dozen local actors who could have carried the show equally well or better under stronger direction. Talent ideally trumps all during casting, but when a company is underwritten by local taxpayers through subsidized rent and grants, reinvesting in the area’s artists should be a consideration – especially when asking up to $55 for seats.