From Korean drinking games to tattoo parlors, Virgin Voyages continues to wow with details on their upcoming cruise ships 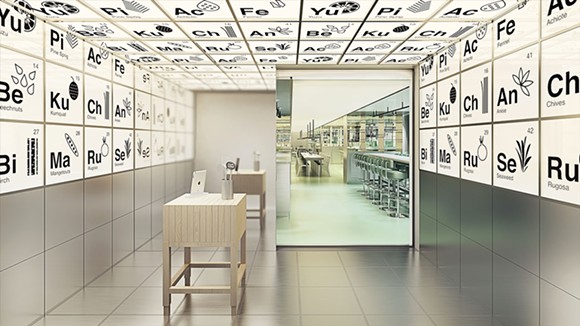 Image via Virgin Voyages
The entrance to Test Kitchen on the new Virgin Voyages Scarlett Lady
When Sir Richard Branson announced details of his new cruise line, Virgin Voyages, he promised a fun cruise line that will buck many industry trends. Now as the Plantation, Florida-based cruise line has announced a number of new details about how Virgin will be different, the cruise industry has been shaken to the core.

Four ships are now under construction with the first, the 2,770-passenger Scarlet Lady, scheduled for a 2020 debut. The next three vessels will debut one per year until 2023.

Image via Virgin Voyages
Virgin has been very secretive regarding many details about the cruise line, but with bookings for the Scarlet Lady opening in just a few months, we now have a clearer vision of what to expect aboard the cruise ship.

Last year, Virgin Voyages made a big splash at a major press conference where Boy George performed, Richard Branson entered via a 20-story tall crane, and details of the multi-billion-dollar venture were finally revealed. One of the earliest announcements by the cruise line was that it would be adults only. The company explains that Virgin Voyages are "Adult by Design" with a group of leading architects and designers, which Virgin calls their “Creative Collective,” working together to create some of the most iconic art-inspired rooms ever to be realized for a cruise ship.

Since last year’s press event few new details have been released regarding the upcoming cruise ships, but last month Virgin showed that it was still focused on bucking the conservative trends found in the cruise industry that are dominated by families and senior citizens. Virgin is going for new cruisers, targeting those who are looking for something different and those who have been skeptical of what the industry currently offers.

When Squid Ink debuts on the Scarlet Lady it will be the first tattoo parlor at sea. Two full-time resident artists will be hand-picked by tattoo legend Lou Rubino Jr. to work the new parlor. 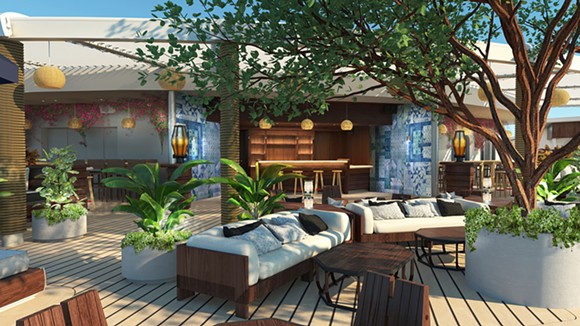 Image via Virgin Voyages
The Dock onboard the Virgin Voyages' Scarlett Lady
Then just weeks after announcing the tattoo and piercing offerings, Virgin announced their biggest difference yet. A press release from Virgin Voyages confirmed the Scarlet Lady will have "no buffet, no main dining room, no forced formal wear, no assigned seating, [and] no assigned dining times," which are standard across the industry. Instead, scattered around the ship are twenty different dining options, ranging from a 24-hour diner to Korean bbq. Nearly all of the restaurants will feature bars.

To ensure high-quality dining on the ship, Virgin added AvroKO Hospitality Group to their “Creative Collective.” AvroKO’s Brad Farmerie, a much-respected Michelin-starred chef, worked with Virgin on developing the onboard dining options. Farmiere is quoted in the press release explaining the process of developing the new dining offerings:


“When working with the Virgin Voyages team, we were inspired by some of the best dining spots around the world but also had to gaze into what the future of dining would look like to bring the most alluring restaurant concepts to sea,”…“Each restaurant will not only serve delicious food, they will also have a unique vibe and energy to them to satiate sailor’s hunger for excitement and restoration while on vacation.”

A sun-deck on the ship is home to Dock, a Mediterranean tapas style restaurant with roaming food carts designed for “grazing” instead of a traditional sit-down meal. 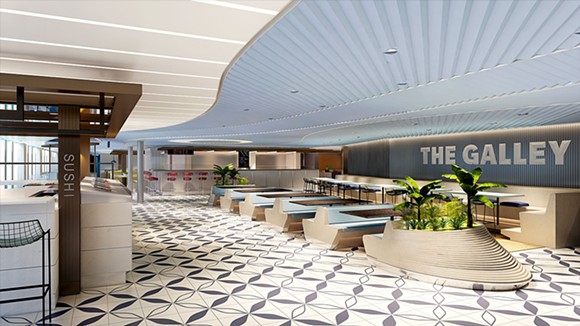 Image via Virgin Voyages
The Galley food hall
The Galley is a food hall with seven different concepts ranging from a ramen bar to a panini shop to the aforementioned 24-hour diner.

Image via Virgin Voyages
Test Kitchen
Test Kitchen will provide diners with a list of ingredients then they will watch the meal come together in the sleek cooking school inspired space.

Image via Virgin Voyages
Razzle Dazzle's entrance on the Scarlett Lady
One of the ships most notable restaurants will be vegan and vegetarian-focused Razzle Dazzle. A disorienting entrance hallway opens to a bright dining room with bold patterns on nearly every surface. “Boozy shots” can be added to the otherwise healthy smoothies and the menu will include Impossible Burgers. Razzle Dazzle is also home to the ship’s drag queen-hosted brunch.

Image via Virgin Voyages
The dining room at Razzle Dazzle
An Italian restaurant with freshly made pasta and a pizza joint with made to order pies round out the confirmed list of restaurants.

The made-to-order ship-wide dining isn’t just about fresh eating, it also helps cut down on food waste. Since the beginning, Virgin Voyages has focused on eco-friendly operations. No single-use plastics will be found anywhere on the ships, a commitment Virgin made early on well before it was the nearly industry-wide standard that is now the case. Instead, all passengers will be provided with reusable drink bottles, and fountains with both still and sparkling water are found throughout the ship. A groundbreaking heat to energy conversion system will help the vessels produce far less carbon dioxide than a traditional cruise ship.

McAlpin is familiar to many in the industry. The Florida native was with Disney Cruise Line for 14 years, five of which he served as president. More recently he served as CEO of The World, the famed privately-owned residential cruise ship filled with millionaires, where he oversaw the most extensive renovation in the ship’s history.

From age restrictions, to tattoo parlors, and from drag queens to eliminating upcharge dining, Virgin doesn't' want to be just another cruise line. Instead, they want to be the cruise line for those put off by the water parks, buffets, and traditions that define most of the industry.

With some of the finest designers in the world and some of the most respected leaders at the helm of the company we might still be nearly two years away from Virgin’s maiden voyage but the company is already sending shockwaves throughout the cruise industry. 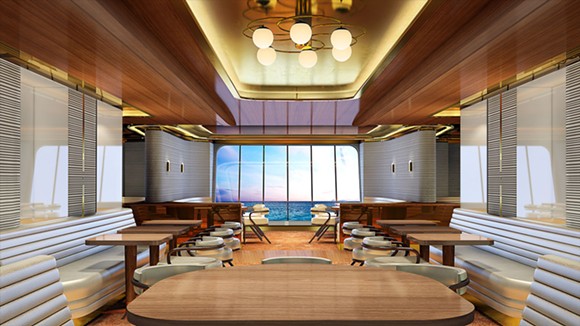 Image via Virgin Voyages
Stay on top of Orlando news and views. Sign up for our weekly Headlines newsletter.