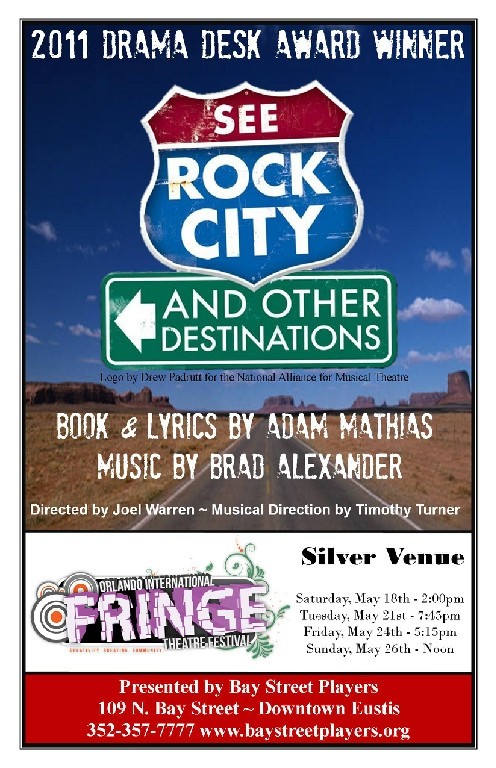 A waitress (Kelly Coy) and wanderer (Sage Starkey) meet-cute in an all-night diner and take off to see the widely-advertised Rock City. A geeky guy (Wesley Slade) waits alone in Roswell for the aliens to land. An adoring granddaughter (Kelly Coy) takes her ailing, inarticulate Grampy (James Meadows) to the Alamo to reunite with his late wife. A jittery bride (Kayla Alvarez) detours from the chapel to tour Niagra Falls with an unconventional guide (Chris Siciliano). The three stories -- along with preppie frenemies at play in Coney Island, and estranged sisters scattering ashes in Glacier Bay -- support the loosely connected vignettes that form Adam Mathias' and Brad Alexander's Off-Broadway musical See Rock City and Other Destinations.

Director Joel Warren, transplanting this production from a recent mounting at Eustis' Bay Street Players, has produced a pleasantly polished piece populated with engaging young players, and the theme of forming human connections jerked a tear or two from me. The pop-pastiche music, while easy enough on the ears, is never earth-shaking, with a couple minor key numbers grow monotonous; musical director Timothy D. Turner's two-piece band sometimes drowns out the unamplified vocals, so try to sit down front. See Rock City is more fully-formed than most Fringe musicals this year, and boasts some fine performances, but could use a peppier pace. I was with it for the first 70 minutes or so, but frankly my focus started to fade before its 90 minutes were up.

Read all our Fringe coverage HERE!