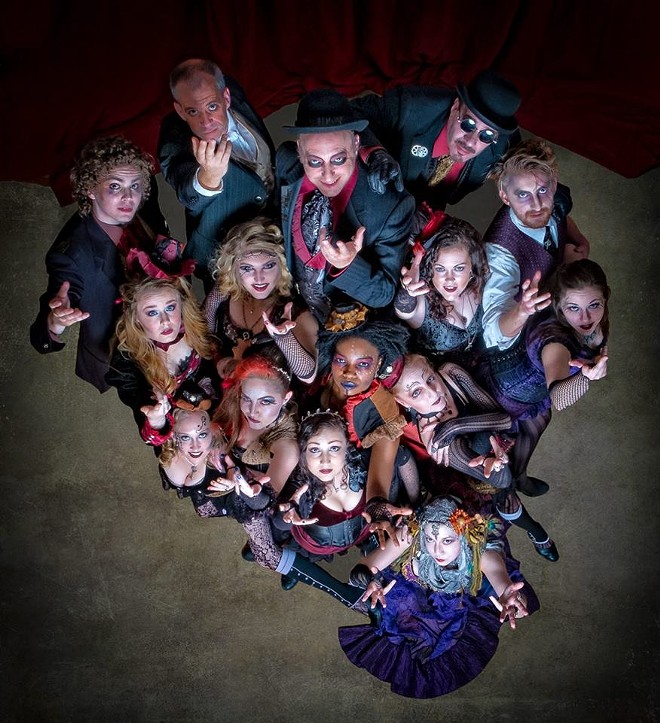 Phantasmagoria: Wickeder Little Tales doesn’t lack for atmosphere. The show has Orlando’s steampunk storytelling troupe retelling classic horror stories from the likes of Mary Shelley, the Brothers Grimm, Edgar Allen Poe and more. And while the tales themselves are well-known at this point, the troupe does an impressive job giving the storylines their own macabre touch.

The most striking aspect of the show is just how immersive it all feels. The leader of the troupe, surrounded by his crouching troupe-members, boldly establishes the rules of show early on: When stories are chosen, they must be told. And when stories are told, they must be finished. It’s a haunting and exciting opening that sucked me in completely, and it didn’t get less gripping from there.

As for the stories themselves, almost all impress with creativity and flair. The best segment is Edgar Allan Poe’s “The Tell-Tell Heart,” with a standout performance from director-and-performer John DiDonna. His portrayal of a sick man succumbing to madness as the troupe imitates the deafening heartbeats by stomping the ground around him is shockingly tense, and may make this version of Poe’s work my favorite.

While the rest of the show doesn’t reach that story’s heights (a retelling of a Brothers Grimm fable is cute but underwhelming), the sheer ambition of the Frankenstein segment has to be noted. Using both a human actor and a large, grotesque puppet to portray Frankenstein’s monster, the back-and-forth between the creator and his monster is remarkably well-done, and speaks to the talent of the puppet’s mechanism and design teams (John DiDonna, Brendan McWilliams and Darkvale Studios).

Twisted and engaging, Phantasmagoria: Wickeder Little Tales is a production that shouldn’t be missed.