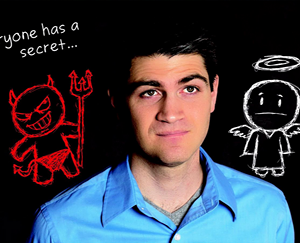 
Improv sketch comedy is always a popular genre at the Fringe, and "Confessions: An Improvised Comedy," from Winter Park’s AdLib Theatre, has a novel hook: Audience members are solicited before the show to write their “sins” on notecards PostSecret-style, and those confessions form the suggestions that spark a series of short sketches.

At the preview performance I attended, audience secrets like “I’ve had sex with over 1000 men” and “I hate the term preggo” prompted scenelets about crossdressing, slut shaming, bad pantomime, and other semi-edgy absurdities. Then, for the show’s second half, certain characters from the preceding skits are selected to spin the “wheel of fate” and sent to either heaven (where attack doves fly out of angels’ armpits) or hell (when everyone has telepathic sex with an old man) for the long-form finale.

It’s impossible to predict how this type of production might vary from one performance to the next, but the performance I attended had an unfortunately low laugh-per-minute ratio. At least two members of the seven-actor cast have some decent improv abilities, but that simply isn’t enough. The initial scenes almost all fell apart before they hit the three-minute mark, with a flourish of chimes cutting each off as it collapsed. Frequently, a good opening gag would flail due to lack of follow-through, while freeze-tag player substitutions often derailed any momentum.

Though there were a few flashes of fun (like the little boy who invited Obama to his birthday party so he could critique the President’s relationship with Angela Merkel), this troupe needs thorough training in the art of “Yes, and,” as opposed to just cracking themselves up by repeating each other’s quips. There’s a difference between smart, structured improv and simply making up random shit to see what sticks – a difference AdLib doesn't quite get.