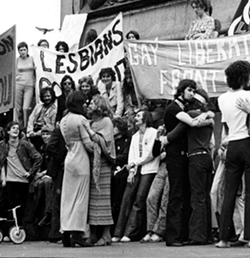 I was intrigued to see 1969: Stonewall — a comedy centering around the Stonewall riots written by Orlando author John Ryan and directed by local theater personality and impresario Michael Wanzie – just to see how Wanzie and Ryan would balance their irreverent comedic sense with such a sensitive topic. It consists of various monologues by its characters, including "Michael, a homosexual" (Ryan), "Anita, the Street Queen hustler" (Miles Berman), "April, a housewife" (Janine Klein), and "Elliott, age 11" (Josh Lefkowitz). They are, as you'd expect from this team, sharp, biting and full of innuendo.

Each character is introduced as someone who at first seems ambivalent toward the struggle faced by the LGBT community circa 1969, the year when most of the action in this play takes place. Its scenes are bookended by videos of news clips leading up to the 1969 Stonewall riots, which marked the beginning of the equality movement for the gay community, and as the show progresses, jokes about clueless johns, easy sex, frustrated housewifery and preteens who love Ethel Merman quickly give way to expressions of frustration, anger and fear. The stories are engaging and very human, and they arc quickly – almost too quickly. Michael's transition from a selfish hairdresser looking to get lucky to a socially conscious gay man happens in what feels like the blink of an eye. And Elliott and April go from zero communication to acceptance and understanding with almost no transition. Some of the characters who are introduced early on – all of the straight men, basically – never develop in any meaningful way, so they remain caricatures of what straight men in 1969 might be (angry/frustrated cops, angry/frustrated husbands, mostly). As a result, the play feels a little but rushed and almost unfinished – there's a lot of material to be mined here, but can it really mine effectively in just 60 minutes?

It can be, for the most part. Under Wanzie's direction, Ryan and his cast do a good job engaging the audience and taking them along for the ride from early 1969 through the June 28 day when the first riots took place. But after that point, things rush along too quickly. One minute, it's 1969 and people are processing what the events that led to Stonewall mean to them – the next, it's five years later and everyone has moved on with their lives. Rushed as it feels toward the end, it's an interesting look at Stonewall from the perspective of a group of people who, for the most part, don't start out as interested parties – they're all bystanders who stumble across it in real life or on TV – but end up touched by it in a most unexpected way.