Last year was one of the most challenging in history for travel and tourism industries as hotels, attractions, restaurants and travel all shut down nearly overnight, and the industry went silent for a year. But now, as more people become vaccinated, a new hope has emerged.

The World Travel & Tourism Council has released its 2021 Economic Impact Report, which paints a picture of a year faced with major setbacks. Overall, the industry saw economic output drop by nearly 50 percent across the world compared to 2019. The U.K., which faced the double whammy of pandemic lockdowns and Brexit, saw a whopping 63.3 percent decline.

“The urgent need to restore international travel is starkly evident following the release of WTTC’s data which shows the global Travel & Tourism sector suffered disproportionately hard due to the pandemic,” explained Gloria Guevara, president of the WTTC. “We know that one in four new jobs created in 2019 were in travel and tourism, so the sector will be absolutely vital to powering the global economic recovery.”

In announcing the report, Guevara pointed to nations like the United States, where vaccine rollouts have seen early success, with more than one in two adults now vaccinated. But as some Americans refuse to take the vaccine, concerns remain on how soon normalcy will return.

Invisibly, a data and consumer trends company, recently completed a series of studies looking at willingness to engage in public activities. In July, the study found just 46 percent of respondents would consider vacationing in a crowded location within the next six months, while a majority said it would need to be at least six months. In a survey from this spring, however, 49 percent reported they would consider vacationing in such a spot within the next two months. Altogether, more than three-quarters of respondents reporting willingness to consider a vacation in a crowded area within the next six months. 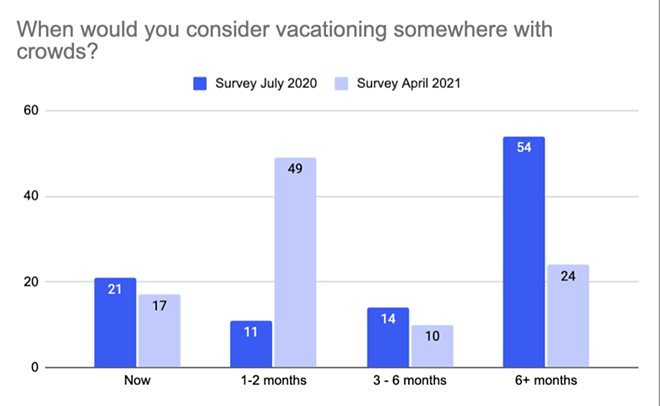 Tripadvisor, working with Accenture, found wealthier respondents were more likely to travel this year. That same study found millennials are the most willing to board a plane for a trip, with 58 percent reporting they would consider flying for their next trip. Among high-earning millennials, 32 percent plan on increasing their travel spending this year.

But despite the interest in returning to travel and social activities, many respondents seem to indicate they will remain cautious. For example, just 22 percent of respondents in the Invisibly study said they would be willing to take a cruise right now, while just 15 percent said they would consider attending a large sporting event. But looking forward, 52 percent said they expect to be interesting in attending sporting events in three to six months, while nearly three in five said they want to wait at least six months before cruising.

The results show the fine line the travel industry must navigate as it reopens. As more places welcome back guests, some are expressing concerns over areas that are reopening too quickly. With locations like California and Hawaii ensuring visitors at attractions are protected through vaccine passports or other protocols, some vacationers are turning to those destinations over places like Orlando, where Florida Gov. Ron DeSantis has actively worked to block safety protocols.

With less than 30% of Florida fully vaccinated, Gov. Ron DeSantis is pushing unemployed Floridians back to work


Surprisingly, 71 percent of respondents in this spring's Invisibly reported they plan to continue social distancing for at least another six months. After recently visiting Central Florida with her husband and 5-year-old, one New Yorker Kimberly told Orlando Weekly how shocked she was seeing the lack of safety procedures during her vacation.

“I really think Florida is out of touch with where they get their money: the Northeast. I hear it from everyone who went down, ‘My trip was a lot of fun but man, they really don’t care about anything down there,'" she said. "The perception of the state is anything goes, COVID or not, and I’m not sure family-friendly Disney will want to be wrapped up with Florida being known across the world as an anything-goes state.”

Kimberly, who wished to keep her last name anonymous as she works in the hospitality industry in the New York tri-state area, went on to say that for her next trip, she’s thinking of visiting Disneyland instead.

Screenshot via @TheWestipher/Twitter
Florida Governor and anti-science champion Ron DeSantis seemingly struggling to understand how to properly wear a mask.
According to Kimberly, for her and many of her friends, Florida’s reputation has dramatically changed over the past year.

Like Kimberly, many consumers are using the reopening as a time to reflect on their personal values. Nearly three in four consumers are more likely to shop at retail establishments that paid employees extra during the pandemic, according to another recent study by Invisibly.

Ongoing safety is also playing out on a global scale, according to the WTTC.

“We believe that only countries that offer certainty and a clear protocol for travel will fully recover from the pandemic,” Guevara stated. “Recovery can be achieved with a combination of rapid resting, mask wearing and enhanced health and hygiene measures to complement the vaccine rollout.”

Florida's destinations aren't doing much to help the state's overall reputation for jumping the gun on recovery. As of last week, all Central Florida theme parks no longer require masks in most outdoor areas as other safety protocols continue to be rolled back. That hasn’t stopped some of Orlando’s theme parks from hitting capacity in recent weeks, with even larger crowds expected over the upcoming Memorial Day Weekend.