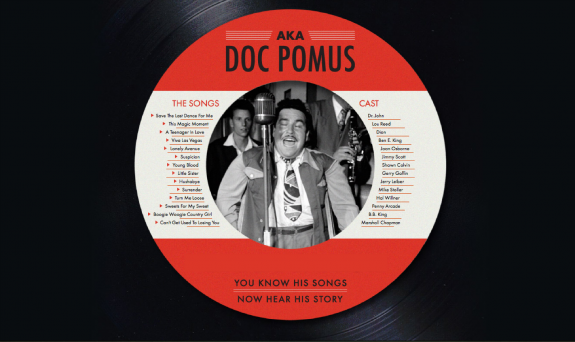 Jerome Felder, AKA Doc Pomus, “was a white boy hooked on the blues.” With a life story that sounds tragic on paper – contracting polio at 6, ultimately dying of lung cancer and resorting to gambling to stay afloat – you’d expect this film to be somber and sympathetic, but the one thing this legendary songwriter never did was play on people’s heart strings. Instead, we’re treated to an incredible overview of music history between the ’50s and ’80s, funneled through the story of a man who attracted and impressed noteworthy artists and songwriters including Elvis Presley, Lou Reed, John Lennon, Bob Dylan, Dr. John, the list goes on.

Doc Pomus, who wrote 1,000 songs in his lifetime, including “Lonely Avenue, “This Magic Moment,” and “Viva Las Vegas,” describes his insatiable urge to pen songs as a “midnight lady with a love-lock on my soul.” And when you hear him describe small changes he made to lyrics that measurably deepened his songs’ sentiments, you understand why nearly every musician of his time attended his informal songwriting clinics – hip, never-ending late-night parties in a Brooklyn motel he inhabited toward the end of his life. Sure, the film relies a lot on stock footage and photography, but the filmmakers have a sincere sense of humor about it, especially that hilarious Elvis photo they used to illustrate a historical phone call between the two soulful crooners.

With truly moving commentary from friends, family and confidantes who were and still are honestly affected by Doc, this documentary is effortlessly enjoyable, plus it succeeds in that rarely accomplished feat of making you think twice about pop songs you’ve heard a million times. After viewing, songs like “Sweets For My Sweet” and especially “Save the Last Dance For Me” will become a much more loaded sugar shock. And the commentary from B.B. King regarding “There Must Be a Better World Somewhere” makes his performance so gripping, afterwards you’ll have to forcibly peel your fingers from the arm of your chair.