The 2012 Orlando International Fringe Theatre Festival is now nothing but a memory, following Monday night's "patrons pick" finale. You can reminice about the Fringe with me in my latest Live Active Cultures column (available on newsstands today in the newest Orlando Weekly) where a share my experiences escorting the Big Nazo monster puppet troupe around the Festival.

Monday's "Happy Endings" closing show was a Graham Norton-inspired talk show hosted by Lady Winifred and Didi Panache (The Screw You Review). Guests on their giant couch included comedian Paul Strickland and the cast of My Exploding Family (who were presented the Kids Fringe "Fringezilla" statue as a tongue-in-cheek reminder of their Tokyo home), with musicians Tod Kimbro and Chase Padget as the improvisational house band. A trio of SAK actors also appeared in skits spoofing popular Fringe shows. 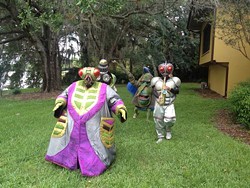 The best part of the night was the impressive statistics producer Michael Marinaccio and general manager George Wallace shared about this Fringe's financial success. With most measures up over 30%, and a quarter-million in sales disbursbed back to artists, my favorite number is $11,000: the amount of alcohol sold by the beer tent on the second Saturday alone, more than double the old record. 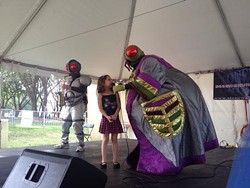 Fringe will return in 2013, and in the meantime we have photos. Enjoy this gallery of images featuring Big Nazo and the final festival weekend, followed by information on all this year's award winners direct from George Wallace. 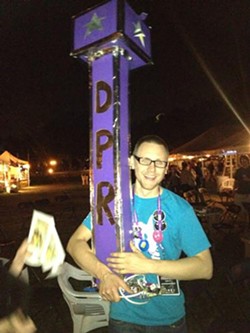 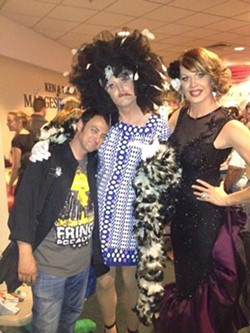 We are proud to announce that Orlando Fringe will be returning more than $250,000 to the 2012 artists. More than 20 pieces of Visual Fringe sold and there were a record-breaking 60 sold-out shows. Kids Fringe saw more than 10,000 children participate over both weekends. Final sales and button figures will be released, but it is anticipated that there was at least a 30% increase in overall attendance.

The awards were hosted by General Manager George Wallace and Festival Producer Michael Marinaccio to an enthusiastic crowd!

The awards were as follows...

Over and Above Award-Nicole Ledbetter

The two largest awards of the evening were given to Terry Olson, who will have an annual Terry Olson Lifetime Achievement Award named after him and George Wallace, General Manager graciously accepted the Beth Marshall Spirit of the Fringe Award.