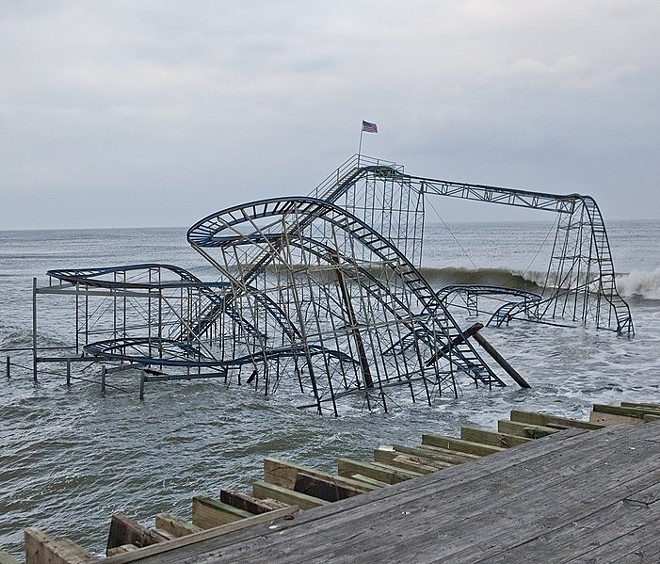 Image via Anthony Quintano/Wikimedia
Superstorm Sandy's damage to the Star Jet coaster in Seaside Heights, New Jersey
Coaster enthusiasts will soon have a new reason to visit Kissimmee.  Construction has begun on a roller coaster at Fun Spot in Kissimmee, next door to Old Town. The new-to-Fun Spot coaster is actually an off-the-shelf Hi-Miler 52-foot model by E&F Miler Industries. Some reports incorrectly identified the new coaster as the Scream'n Eagle from Fun Spot Atlanta, which is a 38-foot-tall Hi-Miler, but that coaster remains open.

The coaster now under construction in Kissimmee previously operated at Celebration City in Branson, Missouri, before moving to Georgia, where it ran at Wild Adventures under the name Viking Voyage.

According to RCDB, a roller coaster database website known for its tracking of coasters, the Fun Spot Kissimmee coaster is now the only 52-foot Hi-Miler still in operation. A second Hi-Miler 52 operated at Casino Pier in New Jersey. That coaster is best known for being washed away by Hurricane Sandy. The coaster structure remained standing in the Atlantic Ocean for nearly a year, becoming a famous image of Sandy’s damage.

Fun Spot purchased the coaster from Wild Adventures after their 2018 season. It was dismantled and moved to Fun Spot Atlanta, where it was thought it would be part of the company’s extensive updates happening to that park, but in a surprise to many, the coaster was moved to Kissimmee earlier this month. 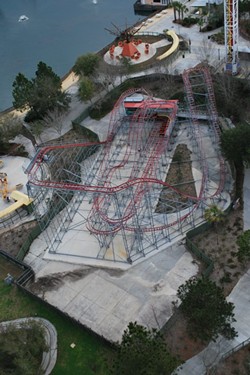 Image via Wild Adventures Theme Park/Facebook
The new Fun Spot coaster when it was still in operation at Wild Adventures Theme Park
Fun Spot Kissimmee is already home to two large coasters, its custom-built Mine Blower wooden hybrid coaster by The Gravity Group, and an off-the-shelf Zamperla spinning coaster named after the Rockstar energy drink. The Rockstar Spinning Coaster previously operated at Cypress Gardens, but was sold off when Merlin purchased the lease for that park, now known as Legoland Florida. An E&F Miler kiddie coaster also operates at Fun Spot Kissimmee.

So far, Fun Spot hasn’t shared many details regarding the new coaster, or if other similar attractions are any indication it should open by the end of the year, but the park did announce a contest for the public to name the ride.

The Sentinel reported that coaster fans can submit names for the new ride at Fun Spot's website, fun-spot.com, and find the contest under the Kissimmee location. Submissions must be made on the web form by 11:59 p.m. on Oct. 31 to be considered, and multiple entries are allowed.