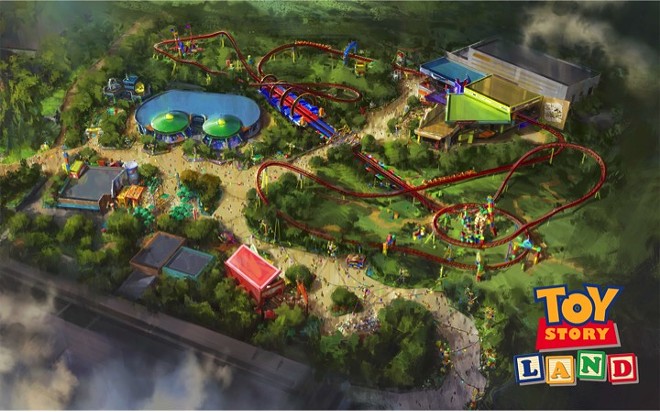 Photo via Disney Parks Blog
Disney used their latest D23 convention in Tokyo over the weekend to reveal many new details on the upcoming Toy Story Land expansion opening at Disney’s Hollywood Studios in a few months.

The expansion is the largest since Sunset Boulevard opened in 1994. The new 11-acre land will feature two brand-new rides and a new facade for Toy Story Mania, along with a new counter-service dining option, new retail and new restrooms.

Toy Story Mania will move its entrance from what is currently the front of the building to the rear of the building. As this new queue is introduced to the ride, no FastPasses will be available for it between April 9 and May 7.

Image via Disney
Alien Swirling Saucers is an updated version of a traditional whip ride, with guests sitting in carriages themed to toy rockets attached to the back of small UFOs that the little green aliens navigate.

The claw hangs from the ceiling in this ride that seems like a 21st-century version of the teacups. If the concept art is any indication, the ride will feature an impressive sound and light package that helps sell the story of you being inside a claw machine.

Similar to Dumbo in the Magic Kingdom, it’s believed that the ride will feature two mirrored ride systems, each with around a dozen cars that will load separately from one another. Each car will seat guests, placing the ride capacity at around 48 guests at a time.

Touring Plans estimates the ride duration to be three minutes.

The second new ride in the land is a family coaster known as Slinky Dog Dash. This Mack Rides-manufactured coaster will feature at least two launches. Originally the ride was to have a traditional lift, but that feature was removed, along with the numerous trenches the ride was originally meant to zip through.

Now, the family coaster will sit at ground level and above. Various larger-than-life toys will fill the area, including giant models of Jessie and Rex. Jessie will be holding up giant Christmas lights that will add ambience to the land after dark. On-ride photos and FastPass will be included in this ride. 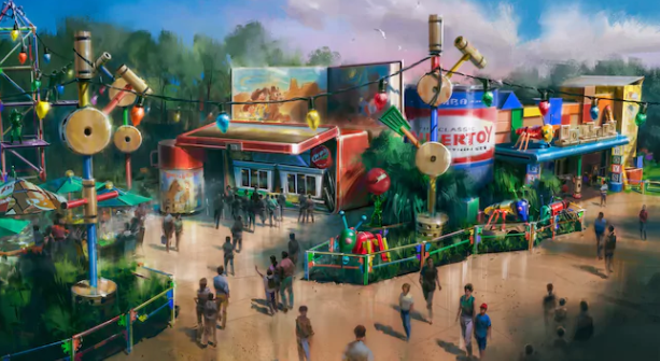 Image via Disney
Toward the rear exit of the land, which will eventually become the second entrance into Star Wars Land, a new building will house a set of restrooms and a restaurant with walk-up window service. A sponsorship with Mini Babybel means we can expect plenty of cheese at this new dining option. Disney has confirmed that the restaurant, known as Woody’s Lunch Box, will feature "classic American fare, old-fashioned soda floats, and other Toy Story-themed specialties."

Over in Shanghai Disneyland, they’re working on their own version of Toy Story Land that’s expected to open a few weeks before the one here in Orlando. A counter service café, the Toy Box Café, recently opened there.

That menu includes a fun flatbread pizza that’s shaped like the aliens with pineapple rings for the three eyes and Lotso-themed Bubble Waffle with Strawberry Ice Cream.

Once the new land opens, which is expected by Memorial Day weekend, the current Pixar Place will close.

In recent weeks, there have been some indications that while the current entrance of Toy Story Mania will close, some of the Pixar Place street may remain open as a meet-and-greet location for other Pixar characters.

Once the Star Wars: Galaxy’s Edge land opens next year, it’s expected that the recently reimagined area now known as Grand Avenue will be used as the entrance with large staging area for those waiting to enter what may be the most anticipated land ever to open at Walt Disney World since Epcot in 1982.

In the coming weeks Disney will be sharing more details.