Elton John, The Album Leaf, Q and Not U and more

KEEPING SHADOWS Photography exhibits always excite the locals, and there's plenty to ooh and aah over in the historic collection currently on loan to Orlando Museum of Art. Keeping Shadows draws together 100 "masterworks of photography" dating from as far as 150 years ago – not long after the very process of photography was invented – to the present. The names of the contributing artists themselves tell a story, ranging from unknowns to the famous, such as controversial war photographer Robert Capa and pioneering female photojournalist Margaret Bourke-White. The display of changing processes documents the technical evolution of photography from daguerreotypes to digital prints. And there's a bounty of subject matter – from beautiful to bizarre. Learn to love art on Thursday afternoons from 1 p.m. until 4 p.m.; that's when OMA admission is free to locals. (through May 22 at Orlando Museum of Art, 407-896-4231; $8)

THE HUMAN RIGHTS WATCH TRAVELING FILM FESTIVAL The concept of a film festival keyed to the issue of human rights seems self-evident; in our day, we've seen plenty of movies that qualified as torture under any definition of the Geneva Conventions. But that's hardly the agenda of Human Rights Watch's touring cinema spectacular, which stops in Orlando this weekend for the very first time. Its slate of screenings and panel discussions shines a light on hot-button topics in the fight for global freedom, from the death penalty (opening-night film Deadline) to anti-Muslim profiling (Persons of Interest) to the inequities involved in trying youthful offenders as adults (the event-closing Juvies). The high-minded festival is bookended by receptions that are totally free to attend; with reminders of institutionalized injustice all around, the one thing you don't want to have to fight for is your right to party. (Opening reception 5 p.m. at DMAC; festival continues through Sunday; for full schedule, see Movie Times listings or www.dmacorlando.com; 407-992-1200; $5/film)

WINTER PARK SIDEWALK ART FESTIVAL The forever-and-a-day custom of staking out ground early in the day for Friday night's smooth jazz opening concert has been rudely stripped away from the 46th annual event. It seems the popular wine-and-cheese-on-a-blanket (and we stress wine) affair got too dangerous – the crowd swelling to 10,000 bodies, their khaki'd rear ends drunkenly shaking to funky doodles after dark. Somebody – or even worse, a lawyer – could have gotten hurt. So organizers moved the music to the daytime, when those frustrated butt-shakers will be added to the 300 artists and some sweaty portion of the expected 350,000 festival visitors who will be crammed into the Central Park strip and munching funnel cakes. Get down! There's a full day's lineup of music, and headliners on the WLOQ-FM (103.1) main stage will wind down at sunset – Friday, Michael Lington; Saturday, Fourplay; Sunday, Eric Darius. (9 a.m.-5 p.m. Friday-Sunday at Central Park, Park Avenue, Winter Park; 407-672-6390; free) 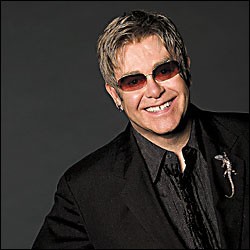 ELTON JOHN The ultra-diva shtick Elton John's manifested as his "image" over the past decade or so has gotten pretty tiresome. Although we totally dug his loudmouthed bitch-slapping of the media (it's amazing what jet lag'll do to you), when we saw that XM commercial he's in … well, there's flouncing and then there's flouncing. We hate to see a guy who's made some amazing rock albums – we just dug up Madman Across the Water for the first time in a while and trust us, there's no flouncing there – turn into this generation's Paul Lynde. His last few albums, including the one he's touring behind, Peachtree Road, have been refreshingly simple in nature; one hopes that his recent flamboyant behavior has simply been a way for him to balance out his inner queen. (8 p.m. at TD Waterhouse Centre; 407-849-2020; $35-$75)

IN THIS DAY Angsty frat boys of the world, unite in your middle-class drudgery! We know you believe that you are our tired and meek, even though you'd probably slam our heads into the floor if we pissed you off. And it's for you that the fine local metalheads of In This Day offer a place to kick nerds in the face, with not one, but two CD release parties. (One CD, one venue, two shows. Stay with us if you can.) Last year, the band put out a four-song demo produced by the late Sam Verella at ARS Studios. Later, In This Day re-entered the studio to complete their first full-length record, resulting in Seven:42, which takes its title from an inside joke among band members about rehearsal times (yeah). The disc includes the four songs from the EP as well as six new songs and a passel of extras: a weblink to two videos, live photos and other looks into the band's backstage antics. The new material is highly reminiscent of Linkin Park and Limp Bizkit, with choruses that remind us of Glassjaw on an especially moody day. Bassist Eric Schramm says the tunes are "heavy, melodic, graceful and brutal." Who are we to argue with that? (5 p.m. with Hand to Hand, Devolve, Holotype and Harms Way; all ages; 9:30 p.m. with 5 Billion Dead, Pain Principle, Such Is Life and Indorphine; 18 and up; Will's Pub; 407-898-5070; each show $5) 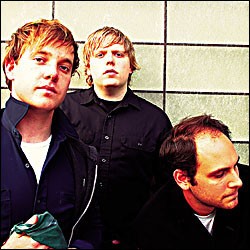 Q AND NOT U From their full-length debut No Kill No Beep Beep, Dischord darlings Q and Not U have embodied the sound that D.C. is famous for: jagged guitars over rhythms in anything but 4/4 time. And keeping in step with label mates (like Shudder to Think, for instance) who also once shared this penchant for angularity, Q and Not U have tired of math-rock recklessness and tapered their dynamics into something a bit more linear, even danceable. The latest release, Power, is full of ass-shaking, melody-driven material that sounds as if the band has discovered its inner Prince. From the album's opener, "Wonderful People," it's pretty clear that they're making a stab at commerciality (look at the tour they're on!), but let's hope the next album doesn't mark Q and Not U's entry into their Diamonds and Pearls phase. (with Interpol; 7 p.m. at House of Blues; 407-934-2583; $20-$30) 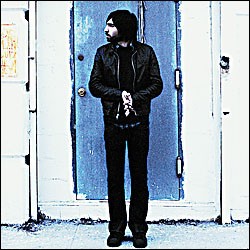 THE ALBUM LEAF Though much has been said about Jimmy LaValle going to record The Album Leaf's June 2004 release, In a Safe Place, in Sigur Rós' Iceland studios, it was precisely this association that left us feeling … well … cold about the album. We've never been fans of lyrical mushmouthing, so when Rós' Jon Thor Birgisson's inarticulate babble made its disappointing appearance on perhaps the most striking and focused song on the record ("Over the Pond"), we couldn't help but fixate on it. It wasn't until the live version of TAL came through town last time that the sprawling majesty of Place finally clicked with us, though we'll always have to skip "Pond." With any luck, they will too. (with The Roots of Orchis, Textual; 8 p.m. at The Social; 407-246-1419; $8-$10)

COPLAND VS. COPELAND We bet you didn't know this, but there's been a bit of collusion going on between the folks at Orlando Philharmonic Orchestra and the indie-rockers at The Social. You may have noticed the increased number of torn T-shirts and tight jeans at recent Bob Carr performances, or perhaps the unusual influx of latte-drinking, tux-clad patrons filling up the back bar at The Social. You have noticed, haven't you? Well, this secret cabal has finally blown its cover. As part of OPO's "Focus Series," tonight's performance focuses on that most American of composers, Aaron Copland. What's at The Social? You got it: the semi-orchestral rockers Copeland, originally from that all-American city of Lakeland. OK, granted, we're pushing it by calling Copeland "orchestral," but they are more complex and thickly arranged than many of their punk-rockin' counterparts (plus, the whole point of this piece would be blown). (Orlando Philharmonic Orchestra, 7 p.m. at Margeson Theater in the Lowndes Shakespeare Center; 407-770-0071; $25-$32. Copeland, with Acceptance, Lovedrug; 5:30 p.m. at The Social; 407-246-1419; $10-$12)