GRAFFITI — AN URBAN LIFESTYLE In a city as assiduously scrubbed as ours, the notion of graffiti as an "urban lifestyle" is such an anomaly that the OMA asked Robin Van Arsdol, Orlando 's aerosol-art kingpin, to import a few taggers from New York and Miami to complement the work of local sprayers Wie and Sex. (Not that Orlando doesn't have its own graffiti underground, it's just sometimes difficult to see.) This event should be one of the best First Thursday events the OMA has put on, as not only will it feature "graffiti in action," a couple of DJs spinning hip-hop (natch), our favorite beer (Shipyard) and mouthwatering Cuban food (from the always-excellent Black Bean Deli), but the scheduled presentation of "The History of New York Graffiti" will put this purported vandalism on the artistic and sociological pedestal it deserves to be on. (6 p.m. at Orlando Museum of Art; $9; 407-896-4231)

THE SOUNDS Like Blondie before them, The Sounds spike their sweetness with a cracked New York syringe, only in their case the toxicity comes by way of Sweden. It's a certain broken-English bravado that works for them, especially when held in check, as on their debut, Living in America. But their new release, Dying To Say This to You, attempts a more jagged edge, punching along a sometimes-amateurish rockiness more reminiscent of Transvision Vamp or Romeo Void than of the great blond one. Clocking in at just over a half-hour, it's a swift kick to the head. Under the deliberate production chops of Jeff Saltzman (The Killers), Paul Kolderie (Radiohead) and James Iha (Smashing Pumpkins), songstress Maja Ivarsson sounds more immediate and driven than ever seemed likely. According to their bio, we can expect that immediacy to translate seamlessly to the stage. "I can't really help myself onstage," Ivarsson says in its glowing graphs. "We're not really putting on a show — this is the way we are always." Us too, always. (with Morningwood, Action Action; 7 p.m. at House of Blues; $15-$17.50; 407-934-2583)

DATE NIGHT AT LEU GARDENS It's BYOB, but the romance potential is still high for Date Night. After a moonlit stroll through foliage that "teems with vigor and beauty," partake of the picnic dinner you packed (or hot dogs and popcorn from vendors), then enjoy a romantic movie on a big screen É in the mosquito-laden splendor of the great outdoors. Yeah, the cuddly factor lessens there, but suck it up for the sake of an evening with your honey — pack some bug spray. If you don't like the movie (this month it's J.Lo's The Wedding Planner), hedges and trellises — ideal for make-out sessions — abound. (gardens open 6 p.m., film starts 8:30 p.m. at Harry P. Leu Gardens ; $5; 407-246-2620) 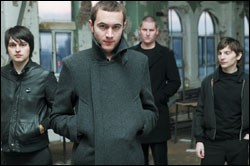 EDITORS Because one of us really sucks at doing his job well, we are sad to report that "we" did not manage to see a single one of Editors' four billion performances at this year's South by Southwest. We think that might be a record for hype-avoidance, as Editors was the band of the minute at this year's conference. Their debut album deserves the lazy comparisons everyone makes to Interpol, but their live sets were reportedly something to behold. We'd vouch for that, but, again, one of us really sucks. (with Stellastarr*, Mobius Band; 9 p.m. at The Social; $15; 407-246-1419) 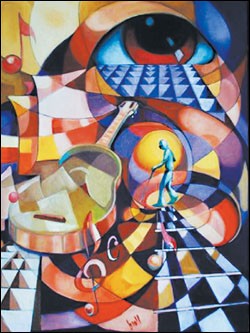 TWO SURREALISTS AND A HYPERVISUALIST COMMA Gallery has had another success with this exhibition of works by three artists — so organizers are closing the show with a treat: a gallery talk by the artists. John J. Browne Ayes, the self-proclaimed "hypervisualist," is colorblind and of Taino heritage; Pedro Brull Torres graduated from the Institute of Culture School of Fine Arts in Puerto Rico with a concentration in painting and mural painting; and David Tear is artist/designer of his own business, Elephant Door, which specializes in themed design, construction and installation. This slice of space on Virginia Avenue is intimate enough when filled with colorful art works, but adding spoken words will surely expand the minds of those in attendance into another dimension. (6 p.m. at COMMA Gallery; free; 407-894-4505)

SETH GREEN If you're wondering how many of Seth Green's loyal fans will actually make the drive down to Coliseum of Comics' Kissimmee store — the only COC location he's visiting this weekend — you probably know him almost exclusively as the movies' resentful villain-seed, Scott Evil. As an integral element of the Buffyverse, however, the guy can count on a vast legion of Whedonites to follow him wherever he chooses to park his carcass. The Coliseum visit is part of the promotional campaign behind yet another Green project: Freshmen, a graphic novel he co-created with writer and lifelong pal Hugh Sterbakov (who will also be on hand for the in-store). Before you balk at the $16.99 book purchase that's required for entry, be aware that first place in line will be auctioned off to benefit ACTOR, the support organization for needy comics creators of yesteryear. And positions 2 through 10 will be drawn randomly from the pool of tickets that are purchased by April 6. Now, that's not so Evil, is it? (2 p.m. to 7 p.m. at Coliseum of Comics, Kissimmee ; tickets at all Coliseum locations, $16.99; 407-870-5322)

XTREME AUTO XPO With categories like "best stereo" and "best lowrider," you can rest assured that this isn't going to be your average car show. Since it's put on by Power 95.3 (WPYO-FM), we're not surprised that the concert will be featuring the likes of Three 6 Mafia, but honestly, the only music that matters will be the bass booming from the trunks and beds of these insanely tricked-out cars and trucks. (11 a.m. at Tinker Field; $15; 321-281-2070)

CHAMPIONS ON ICE If you didn't get your fill of triple Salchows and double Axels during the Winter Olympic Games in Torino , many of the world's best figure skaters will be in town to show off their moves Sunday. The cast ranges from old-timers such as Michelle Kwan to Irina Slutskaya, the sport's new favorite scantily clad ice princess. Olympic medalists Sasha Cohen and Johnny Weir and European skaters Irina Grigorian and Evgeni Plushenko will also take the ice. Whether you're caught up in the so-called "skating magic" or not, the outfits and potential for falls usually make up for the Celine Dion ballads. (3 p.m. at TD Waterhouse Centre; $30-$145; 407-849-2020) 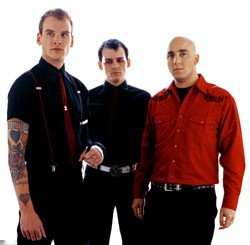 ALKALINE TRIO We love it when our favorite bands surprise us by doing right by their fans. That's exactly what Alkaline Trio has done by undertaking their most recent tour, dubbed "The Occult Roots of Alkaline Trio: Early Songs for Eerie People." Rather than parlaying the success of their new album, Crimson, into endless 30-minute opening slots for arena-punk bands, AT opted to craft a full set that focused on their older, creepier material, complete with lots of acoustic (!) bits and (we're guessing here) multiple acts of live vampirism. Why? Simply put, they're doing it for the fans who've been with 'em since before they made an impact, either as a legitimate act of respect or just a calculated way to dampen the sellout criticisms of their recent record sales. (with Against Me!; 6:30 p.m. at House of Blues; $15.50-$18; 407-934-2583)

YOUNG RUBE No matter if you can't afford live theater or can't get enough, or even if you're totally in the dark, here's a can't-lose performance. As part of its PlayFest Monthly Reading Series, the Orlando-UCF Shakespeare Festival stages a read-through of a musical based on the life of cartoonist Rube Goldberg, starring Michael Andrew (the crooner-cum-actor who knocked us all out at 2004's Fringe Festival in The Nutty Professor). Though it's promoted as just a free reading, the professionals involved will take it to a captivating level, even using minimal props. After it's over, the audience can discuss what they saw — or what they'd like to see — with playwright by John Pielmeier (music is by Matty Selman). For those perhaps too young to remember, Goldberg (1883-1970) was a Pulitzer Prize-winning cartoonist, sculptor and author best known for his "inventions" — depictions of complex machines made to execute simple tasks, with dozens of wheels, gears, paddles, pails and balls needed to, say, close a window when it starts to rain. So wrapped up in Young Rube, there's a story of art, music, history and humanity. (7 p.m. at Lowndes Shakespeare Center; free; 407-447-1700)

PUSSYCAT DOLLS Yeah, we know we lose that last ounce of credibility we may have had by recommending this show. Oh, well; we have no defense. We know there will be crazy lip-syncing and way more songs in the set than there should be, but there's something about these girls that we find creepily appealing. No, it's not the wardrobe malfunctions they have, and no, it's really not that we think they're particularly hot (in fact, we think they look kinda like transvestites … or transvestite mannequins). But the sheer apocalyptic inanity of it all — a second-rate burlesque show turned into a fourth-rate girl band working with a fifth-rate Busta Rhymes to create a top-shelf pop song — is too much for us to resist. (with Robin Thicke; 7 p.m. at Hard Rock Live; $30-$45; 407-351-5483)