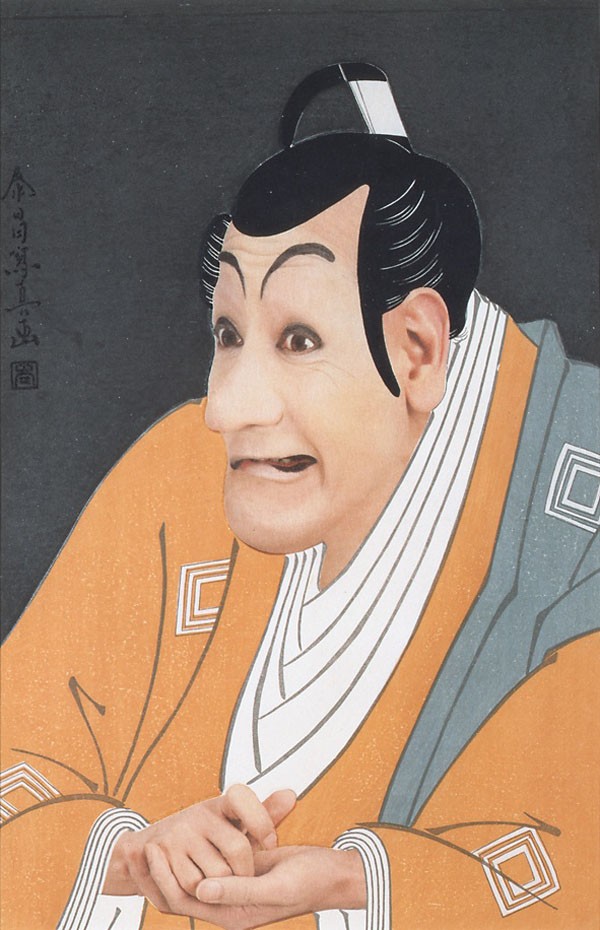 Learn from the master - Modern Japanese artists, such as Yasumasa Morimura, whose self portrait 'Sharaku 4 after Sadanoshin' appears above, have found inspiration in Sharaku's work

If only National Enquirer covers could inspire half as much art as the work of Toshusai Sharaku did. In 18th-century Japan, Sharaku – a mysterious artist who carved at least 150 woodblocks he used for printing portraits of famous kabuki actors, wrestlers and dancers in unflatteringly realistic poses – was like the Enquirer of his day, criticized for scandalizing the culture’s glamorous celebrities by stripping them of their mystique and depicting their very human qualities. He caught and reflected their peeved grimaces, ignorant squints and receding hairlines a bit too convincingly for many of his peers. But centuries later the work of Sharaku – which means “nonsense” in Japanese – survives and is celebrated. The most recent show at the Cornell Museum, Sharaku Interpreted by Japan’s Contemporary Artists, examines the impact the artist has had on Japanese art.

The show was brought to the Cornell by the Japan Foundation, an organization that promotes the international exchange of Japanese art, language and culture. This is the only Florida stop for the touring exhibit, which gives viewers a chance to see some intriguing, world-class contemporary art that’s been inspired by the work of Sharaku, one of Japan’s most famous artists, whose brief seven-month career lasted from late 1794 into 1795.

Sharaku’s marvelous woodblock prints are a trip, and many of them are reproduced for the show. With minimalistic linework, their lips, noses, eyes and ears reveal very individual features that reflect universal emotions. The portraits are indeed unflattering and very personal, yet they somehow retain deep sympathy for their subjects.

“Ichikawa Komazo II as Shiga Daishichi” – a recent print of a piece done by Sharaku – shows an actor in character. He’s a villain, but he looks more rattled and confused than sinister, rather like Fred from the Scooby-Doo cartoons. It has the very thin lines, rich color and patterning that the traditional prints on rice paper all had. Sharaku actually ground mica into the ink for his original prints, lending sparkle and shine to the backgrounds.

But it’s the contemporary artwork inspired by Sharaku that steals the show. “And Then, And Then and then and then 3A and 3B,” by Takashi Murakami, is a diptych of a rodent-eared grinning face rendered large. It’s like a kind of street art, with its intense, textured color layers that link a modern-day aesthetic with the Sharaku portrait tradition. Naofumi Maruyama’s two huge, out-of-focus portraits have no linework whatsoever, yet these luminous, floating faces loom in the gallery, oozing the vulnerable souls of their subjects, “Yuji” and “Sachi.” “Image of Mr. S – B” by Masahiro Kiyomizu is a black-glazed ceramic sculpture of three linked, cattywhompus boxes seemingly dancing, nicely activating a corner of the gallery. Elsewhere are gorgeous woodblock prints, old and new, a series of posters that play with Sharaku’s trademark features – eyebrows, noses and mouths – and other pieces of porcelain and wood by current Japanese artists.

The exhibit is redolent with the universality of humanity, just as Sharaku’s original work was. Across time, and across the globe, viewers can easily connect with the cocky studs, flirty chicks, the haughty matron here, the garrulous old soldier there, and also the experimental spirit of contemporary artists working in their own milieu but with a foot solidly in the past. This exhibit is made more poignant by the recent disasters in the island nation of Japan, making it even more of a must-see during its brief stop here in Florida.