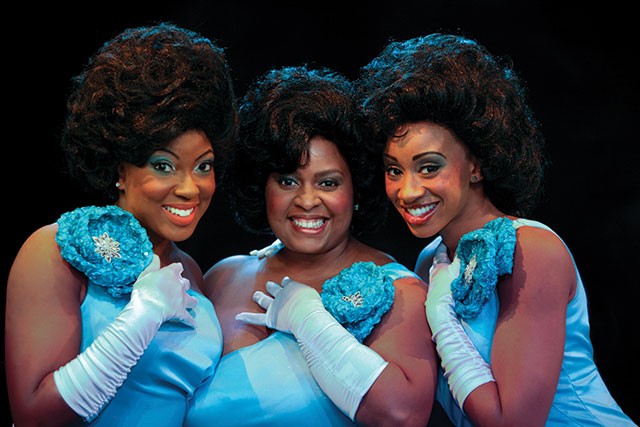 Dreamgirls, the Tony-winning 1981 Broadway musical loosely based on the life story of Diana Ross and the Supremes, has arrived on Church Street with all the sparkly sequins one would expect of a 1960s singing group – but without the polish or emotional punch we’ve come to expect from Mad Cow Theatre.

In 1962, the Dreamettes, comprised of golden-voiced Effie White (Jayne Trinette) and her BFFs Deena Jones (Cherry Hamlin) and Lorrell Robinson (Jasmine Thompson), journey from Chicago to Harlem’s Apollo Theater in hopes of hitting the big time. They lose the amateur night competition, but win the attention of James Brown-esque soul star James “Thunder” Early (Clinton Harris) and his snake-in-the-grass manager, Curtis Taylor Jr. (Van Dobbins). Over the next decade, the group (now rechristened “the Dreams,” with Deena promoted to lead and Effie pushed to the background) reaches the heights of stardom while hitting bottom in their personal relations, as their careers parallel the popularization of R&B and the displacement of rock & roll by disco.

Tom Eyen’s book and lyrics touch lightly on intriguing issues of race and class in American pop culture (an element ironically reinforced by watching the mostly black cast perform for a lily-white crowd), but we never really see beneath the surface of the characters except in clichéd quips. The show’s heart should be the tempestuous relationship between the titular women, but – although Hamlin and Thompson have solid pipes and plenty of sass – their personalities remain single-dimensional ciphers. Dobbins does the best, leavening Curtis’ oily ambition with affection. Jamil Claxton exudes good-natured gentleness as Effie’s songwriting brother C.C., and Harris’ Early is a perfect peacock in his absurdly ill-fitting pompadour.

The three-piece band, led by Philip King, is hidden behind the upstage curtain, and microphones are used with odd inconsistency, resulting in a muddy sound mix that does composer Henry Krieger’s mock-Motown music no favors. It doesn’t help that the pre-show soundtrack of genuine girl-group classics just reminds the audience how much better the real thing was, but even breakout numbers like the title song and “One Night Only” feel curiously down-tempo and lacking the necessary poppy propulsion.

Jayne Trinette, who is cast in the crucial role of Effie, boasts an impressive résumé including national tours of The Lion King and Caroline or Change, but the understudy I saw at Sunday’s matinee had severe pitch and projection problems that practically spoiled the entire show for me.

Director-choreographer Ray Hatch’s production isn’t entirely without merit, and if it were coming from a community theater I’d probably be applauding loudly. But with all the talent and resources at their disposal, I’ve come to expect more from Mad Cow than a middling mounting of a second-tier show.

It’s undeniably exciting to see so many of Orlando’s African-American performers together on the main stage, where they are too rarely seen. I just wish they had a production more worthy of their assemblage.