DEW ACTION SPORTS TOUR Orlando's the final stop for this touring showcase of the finest in skateboarding, BMX and freestyle motocross, which augments its league-inaugurating lineup of action-sports competitions with interactive exhibits that involve nonathletes in all aspects of the lifestyle. There's even a concert by Hoobastank and All American Rejects at 9 p.m. Friday, its sonic "pleasures" included in the price of a regular daily ticket. For those who prefer their skating action in smaller venues, promoter Victor Perez has a Friday event at Will's Pub that advances the street-surfing cause with live music, art (by skaters, natch) and even indoor 'board demos. Skating is not a crime, remember ... though at Will's, it might be a good reason to hold your drink extra tight. (2:30 p.m. at TD Waterhouse Centre, through Sunday; $12/day, $35/four days; 407-849-2020; www.dewactionsportstour.com; 10 p.m. Friday at Will's Pub; $7; 407-898-5070)

THE HUDSON RIVER SCHOOL AND JOHN JAMES AUDUBON Fall brings color into the Mennello Museum with the arrival of two fresh exhibits. Color radiates from the landscapes of the Hudson River School artists (including Thomas Cole, Frederic Church, Albert Bierstadt and Asher B. Durand) and in the character of John James Audubon. The display of the naturalist's personal items will be fleshed out by an Oct. 21 talk by historian and educator Cynthia Elyce Rubin from the American Folk Art Museum in New York. At that session, Mennello director Frank Holt will stand up for the Hudson crew. (opening Oct. 14 at Mennello Museum of American Folk Art; $4; 407-246-4278; www.mennellomuseum.org)

DOLEMITE VS. BLOWFLY There's nothing creepier – and more entertaining – than watching a man past retirement age go on and on about how much he loves pussy. Wait, we take that back … the one thing that's creepier than that is watching two men past retirement age go on and on about how much they love pussy. These two powerhouses of potty-mouth blaxploitation are perhaps the only men we'd tolerate such language from. Why? Because Rudy Ray Moore ("Dolemite") and Clarence Reid ("Blowfly") have given us the two touchstones by which we've lived our still-adolescent adult lives. The former's movies taught us how to shoot guns while having sex and sticking it to the man, while the latter's "Too Fat To Fuck" has kept us ever-mindful that it's important to keep in shape. Seriously, although it's easy to group these two together thanks to their astonishingly profane language, you should also remember that Dolemite is probably solely responsible for keeping dozens of slave-era oral stories ("Petey Wheatstraw," "Signifying Monkey") alive, while Blowfly's musical work within the disco and post-disco world cannot be underestimated. These guys are the real roots of hip-hop and are absolutely living legends. And that ain't no joke. (with The Voodoo Organist; 9 p.m. at Will's Pub; $15; 407-898-5070)

HITSVILLE SOUL CLUB RECORD FAIR AND ALL-NITER There's a crazed sector of music collectors devoted to the music known as British soul – the genre that grew in 1960s British nightclubs as the Brits reveled in and resuscitated the grooves of forgotten American black soul, R&B and blues artists. Passionate British organizers are using this meeting to flush out the fans – with exclusive record vendors and a till-dawn dance party reminiscent of their heyday. (10 a.m.-4:30 p.m. Saturday, 7 p.m. Saturday-7 a.m. Sunday at Best Western-Lakeside, Kissimmee; $25; 941-266-8783; www.hitsvillesoulclub.com)

GHOSTS IN THE MACHINE Alt-culture junkies who have gotten in on the soft open of Überbot know that the store – located just steps away from the Regal Winter Park Village Stadium 20 multiplex – is more than just another comics-and-collectibles shop. Its proprietors are going for a gallery feel that positions their selection of designer toys and fashion-forward geekiana as works of art in their own right. That concept reaches full fruition in tonight's grand-opening event, which includes appearances by designers Nakanari and Bloo Empire. Two of the leading figures in the field of streetwise toycraft known as urban vinyl, the pair will show off their accomplishments in that media and the related ones of apparel, paintings and plush. They'll customize some pieces on the spot and raffle off others to benefit the ASPCA Disaster Relief Fund. An exhibit of paintings by additional artists (including locals Phil Noto and Dennis Brown) leaves no doubt that aesthetic awareness is a concept these 'bots take seriously. (7 p.m.-11 p.m. at Überbot; free; 407-788-8237; www.uber botonline.com)

DEVIL DOLL The last time Devil Doll came to town, it was something of an underwhelming experience, perhaps due to the fact that people thought they were going to be getting a burlesque show. That's not the deal, y'all. Devil Doll may strike a Bettie Page pose, but the raunch that comes from the stage is purely thanks to the music, a surprisingly potent blend of swampy rockabilly and '50s swing. (with The Delusionaires; 10 p.m. at Copper Rocket Pub; $7; 407-645-0069)

OKTOBERFEST As far as foreign policy goes, there's nothing too bad breaking on the European front that should interfere with the Osceola German-American Club's annual celebration of food, beer and wine. Jump on the dance floor to the authentic tunes of Alpine Trio and Spitze. (3 p.m.-11 p.m. at Osceola Heritage Park; $8; 321-697-3333) 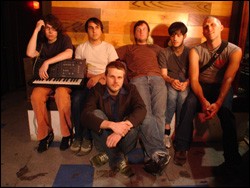 HOLOPAW We've got to say that we were a bit perplexed by (and not too happy with) Holopaw's new disc, since it seems that rather than sticking with the strong songwriting that made their semi-twangy/semi-loopy debut so compelling, the group's decided to go all atmospheric and experimental on us. That might explain the fact that Holopaw is touring with twisted electronicist Daedelus, and while we certainly applaud any musician's efforts to move beyond expectations, we have to admit that we're still wrapping our heads around this one. (with Daedelus, The Sugar Oaks; 9 p.m. at Back Booth; $10; 407-999-2570) 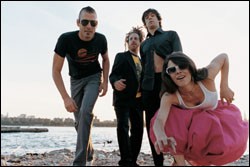 BRAZILIAN GIRLS Sure, they're overhyped, and sure, our NPR-listening aunts and uncles are a little too nutty about them, but we still love 'em. There's precious little bossa nova beat involved in making BG's blissful, silly fun so infectious, but the way this group blithely incorporates all sorts of global pop elements into their sound makes us wish more bands understood that pop music doesn't have to be stupid. (8 p.m. at The Social; $15; 407-246-1419)

RAJAN & SAJAN MISHRA Indian vocal music is something of an acquired taste for Western ears. Even for those folks who know their shudha from their sampoorna, the role of the voice in Indian classical music is often a challenge. Based in the same elastic, improvisational structures that keep instrumental music vibrant and alive, the melodies are amorphous and hard to pin down. The simple presence of a voice is enough to make most listeners look to the singers for some sort of guidance, but vocalists in Indian classical music are more often treated like instrumentalists, weaving in and out of themes, improvising and defining the piece in very broad terms. Rajan and Sajan Mishra (brothers) are undisputed vocal masters who, not surprisingly, work quite well together. They'll be joined by Rajan's sons (Rajnish and Ritesh, both vocalists), as well as Kumar Bose (tabla) and Kanta Prasad Mishra (harmonium) for what will certainly be another memorable presentation from the Asian Cultural Association. (6:30 p.m. at Darden Adventure Theatre, Orlando Science Center; $25; 407-333-3667) 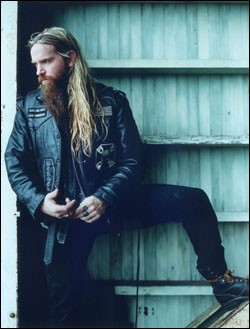 ZAKK WYLDE'S BLACK LABEL SOCIETY He drinks too much, he cusses too much and he spits too much. That's why we love Zakk Wylde: He's one of the few remaining "rockers" around who both rocks mightily and lives like a damned rock star should live. Unapologetic in his excess – when it comes to both booze and shredding – when this burly mountain-man takes the stage, he completely owns it. (with Brand New Sin, Pain Principle; doors 6:30 p.m. at House of Blues; $25-$54; 407-934-2583)

ANTI-POP FESTIVAL We're very excited about this festival and the excellent independent music it'll be putting on stages all over Orlando. The five-day festival kicks off tonight with a two-pronged opening party: a performance by Ambulance LTD at The Social (see story) and a DJ set by ex-Smiths bassist Andy Rourke afterward at Independent Bar. We've got plenty more to say about it – and we will, next week – but it all begins tonight and you'd be unwise to miss it. (www.antipopmusicfest.com; $10)

THE WONDERFUL WORLD OF TMDLS Clean water is a critical problem and yet it's difficult to navigate the jargon used by experts in their explanations of Total Maximum Daily Loads. The Sierra Club hosts a class on the EPA and DEP solutions to get those less-than-pristine surface waters back to being safe enough for the fish and us. (7 p.m.-8:45 p.m. at Harry P. Leu Gardens; free; 407-246-2620)