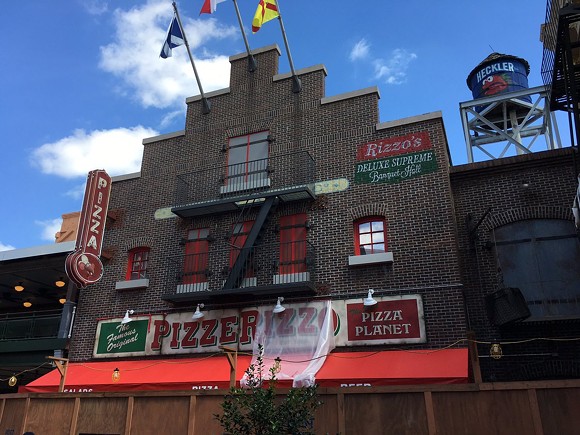 Photo via @DisneyZiggy | Twitter
Disney's Hollywood Studios has seen vast sections of the park close as it transforms into what will practically be a brand new park.

One of the few corners of Disney's Hollywood Studios that has remained virtually untouched has been the area now known as Muppets Courtyard. This small section of the park, with what used to be an afterthought of an attraction, has become a well-themed, crowded land.

The area has seen many small changes, including the draining of the famous Miss Piggy fountain (though it does look to be temporary), but the largest update to Muppets Courtyard has been the redo of Pizza Planet. PizzeRizzo will keep pizza on the menu but that's about the only connection PizzePizzo will have to the former occupant.

Disney recently released new details on this Muppets themed pizza joint. According to the Disney Parks Blog, the menu will include personal pizzas, subs, and Antipasto Salad. Italian-inspired desserts will also be available. There will be two specialty drinks; a non-alcoholic Peach Bellini and a Wildberry-Basil Lemonade Limoncello.

We've seen plenty of details already in the outdoor dining areas but we recently learned new details the indoor dining areas. Gone are the arcade games that made a visit to Pizza Planet kinda worth it (well not really, but it was at least a distraction from the cardboard pizza you were consuming).

Instead, we have an upstairs dining room themed to a banquet hall where a wedding reception is taking place. Expect typical wedding reception music, like the Chicken Dance, and there will even be a disco ball.

PizzeRizzo will open on November 18, just in time for the Thanksgiving crowds. In the meantime, if you're looking for subpar pizza in an excellent themed environment there's always the Boardwalk Pizza Window.