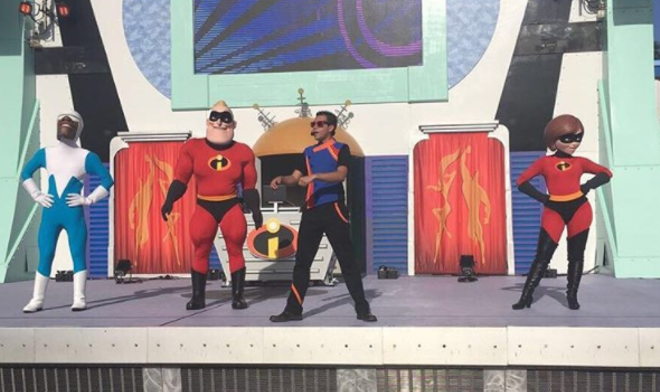 Image via @itsyagirljessica | Instagram
With both Toy Story Land opening at Hollywood Studios and the Incredibles 2 opening in theaters this June, Walt Disney World is going all in on Pixar this summer.

The focus will primarily be on the new kid-friendly land opening at Disney’s Hollywood Studios, one of the most significant expansions in the history of the park. But there are a few other things happening around WDW that will make plenty of news of their own.

While the entire summer marketing campaign is named “Incredible Summer,” with a logo that looks straight out of The Incredibles movies, the stars of the Pixar film will only be at the Magic Kingdom when the summer festivities kick off on May 25.

The Incredible Tomorrowland Expo will take over Tomorrowland with a dance party (of course), decor inspired by the film, and character interactions with Mr. Incredible, Frozone and Edna Mode. This is the first time Edna will interact with guests at Walt Disney World. The Disney Parks Blog also mentioned that Tomorrowland will feature “sounds from the film.”

Some rumors are pointing to Disney looking to update the audio on the iconic Peoplemover ride to feature Edna Mode’s voice. The slow-moving tour of Tomorrowland attraction has been a staple of Magic Kingdom since it opened in 1975. The Edna Mode audio is expected only during the Incredible Tomorrowland Expo, returning to the current audio on Sept. 4.

The Peoplemover update and the Incredibles theme seems to fit in with more permanent changes rumored for the land. On Monday morning WDW News Today, an unofficial news and rumor site focused on Walt Disney World, reported that they have been informed of a major Tomorrowland overhaul in the works that will include a more streamlined design similar to the original mid-century space-age aesthetic of the land.

The design seems to work well with the Incredibles, leading some to think the Edna Mode overlay of the Peoplemover may be extended beyond the summer campaign. WDW News Today also mentioned that the Toy Story-themed kiosks will be removed since they are so similar to ones featured in the new Toy Story Land.

The Tomorrowland summer dance party event seems modeled after fan conventions like Comic-Con but with a heavy dose of both mid-century and comic book style. The question remains on how much of this Comic-Con spoof will be lost of most guests and how much of it may remain after Sept. 3.

Over at Epcot, Star-Lord looks be visiting well before the new Guardians of the Galaxy roller coaster opens. Running June 9 through Aug. 19, the Guardians of the Galaxy – Awesome Mix Live! Concert Series will take place five times a day at the America Gardens Theatre. Along with Star-Lord, Gamora will join the live concerts, which will feature classic rock songs from the soundtracks of the two Guardians films.

The Animal Kingdom will be going to the birds with two new bird-focused features. The brand-new permanent bird show "UP! A Great Bird Adventure" will replace the 20-year old Flights of Wonder show. This new attraction will help bring more intellectual properties into a park that many complained wasn’t “Disney enough.”

Also at the Animal Kingdom, Donald Duck will keep the bird theme going with a new dance party (yet another one) where he’ll be joined by some of the lesser-seen ducks of Disney, including Scrooge McDuck and Launchpad McQuack. Donald will also help redecorate the land with his own style. The Disney Parks Blog explains that this “dino-” party is because Donald has recently learned that birds are decedents of dinosaurs.

Other aspects of the Incredible Summer include a hard-ticketed event at Typhoon Lagoon, special viewing events of Incredibles 2 at the AMC Disney Springs, and other surprises throughout the summer.