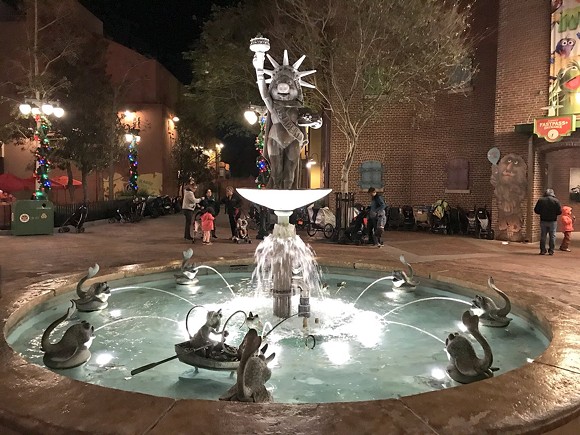 Image via Laughing Place | Twitter
The restored Muppets Fountain at DHS
Just over a year ago Disney drained the famous Muppets Fountain at Disney’s Hollywood Studios, causing outrage and worry among many Muppets fans. The iconic fountain has sat outside the Muppet-Vision 3D attraction at DHS since it opened in 1991. With the area around the Muppets attraction being renamed "Grand Avenue" and given a modern-day L.A. theme, many worried that despite the addition of PizzeRizzo the end might be near for The Muppets at Hollywood Studios.

When PizzeRizzo opened earlier this year, the lack of extensive theming inside the two-story counter service restaurant only perpetuated these fears, even while many said the fountain draining was only temporary.

Some speculated that the fountain needed to be drained because of nearby Star Wars: Galaxy Edge construction.

The fountain featured a large circular pool and a statue of Miss Piggy in a pose modeled after the Statue of Liberty with water squirting haphazardly in various directions around her. Numerous other Muppets characters were featured in the fountain as well. It was drained in late October 2016 and plants soon replaced the water. Since then the former fountain has been a planter with Miss Piggy still in her patriotic pose in the middle but all the other Muppets characters were removed. A large box covering the basin appeared a few weeks back and then without any notice the box was removed revealing the former basin now refilled with water.

The fountain was turned on this past weekend, meaning this iconic centerpiece is once again welcoming guests while cooling the area. The bad news is only Miss Piggy is featured in the new fountain, and there's no word on whether the other characters will return. The good news is with Disney investing in new signage for the attraction earlier this year and with the fountain being restored, unlike many attractions at DHS, it’s safe to say the Muppets won’t be going anywhere anytime soon.